I wonder why they need them up there? 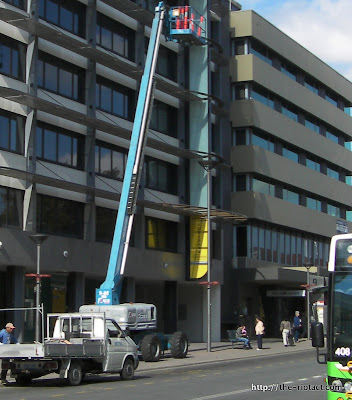 As seen in Civic today in the interchange.

A pint to the person who can come up with the best reason as to why witches hats are needed outside the fourth floor.

12 Responses to I wonder why they need them up there?
Filter
Showing only Website comments

They’re not allowed to operate that equipment without some sort of markers around the base, like witches hats.

they are for the goals for the game of indoor being played by the inhabitants of that office on their lunch break – gotta get exercise, minister says so.

a) local member hires cherry picker to obscure cameras from photographing him at gay sex club.

b) local hire equipment chief executive Robert Scampton uses unleased equipment to block morning sun from his inner city apartment window after building management refuses to adjust the shade fitted to the outside of the building. When asked why Mr Scampton didn’t install blinds to his apartment he responded. “F&ck em, if I wanted blinds in my apartment I would have started a blind company. I started a hire company, so this is my solution.” In a related matter Hughy Dewey and Rice, the administration of Scampton Hire, are expected to advise tomorrow whether the company will continue to trade in the upcoming months.

they put them up there to stop drunks from stealing them

It’s to prevent them being stolen by uni students on the scav hunt.

The real answer is that once they finishing painting for the day they put them up there so the Civic drunks can’t nick off with them over night. While it is in operation they are down on the ground spread around the machine and the operating area with tape between them.

In answer to bd84’s question, they stripped the old paint, cleaned it up, and are currently repainting it. The colour scheme is different in part, but still mostly white – just a cleaner white. It is an improvement.

Legal Aid has moved out hence the Ray White sign, and there will no doubt be more trucks and things there as they strip the place.

I could be quite sensible and say that they had the newbie on for his first day and instead of putting them on the ground under where they were working, they took them up on the podium with him.

Maybe he was getting pissed off at the number of times they were getting stolen so he decided to keep the safely close by.

I’ll give a more logical answer and say they’re up there as so they don’t get stolen when not being used.

I think you will find they are there so no one from a night out in the town can get to them and steal/destroy them.

It took me a while of peering at the monitor closely to figure out where the hell the witches hats are, then saw the safety posts up on the cherry picker, which I’m guessing that’s what you mean.

I could be quite sensible and say that they had the newbie on for his first day and instead of putting them on the ground under where they were working, they took them up on the podium with him.

I think they more pressing question is, what the hell are they supposed to be doing to that building?? They have been using that cherry picker everyday for the past 2-3 months, the people up there don’t seem to do much and the building’s appearance has not changed in any way.

tim_c - 8 minutes ago
It's not really that illogical - those who have the potential to inflict the most carnage have a greater responsibility to be... View
tim_c - 15 minutes ago
Technically it's illegal to obstruct traffic, though it's obviously never enforced. Unfortunately cyclists like those above a... View
purplevh - 16 hours ago
I think he was talking about how far right in that right lane the cyclists were. Clearly they were within about a metre of th... View
Community 10

tim_c - 23 minutes ago
I think all the ACT Government maintenance people are still working from home... over 4 months ago I reported some severe dam... View
babyal - 2 hours ago
Ken Behren CR is correct the legal issue if something were to happen would be so not worth the trouble. you want to change le... View
Elf - 3 hours ago
People just don’t care anymore. Forget about the long grass on public land, have a look at the naturestrips out the front o... View
News 1

Kylie Gordon-wilkins - 3 hours ago
Work with Ngunnawal elders and community to create places that acknowledge the owners of the land that has changed so much. W... View
Majella Kesby - 15 hours ago
Well they could deal with the African Lovegrass that's overtaking the reserve area behind me before it's completely overrun. View
Tim Gardner - 18 hours ago
Stephen Budge thank god for that..my parents opened up shops in the Tuggeranong valley before there were houses to the south,... View
Community 3

Winkie Wee - 5 hours ago
I think it would be appropriate to have registration to vote for the 16/17 year olds voluntary. If they want to vote, they ca... View
Business 1

HiddenDragon - 17 hours ago
Some time in the next 12-18 months, we can look forward to seeing the first of the inevitable articles about how this latest... View
News 15

slovenia - 18 hours ago
Yes an explanation is need to the community as to why the pool is closed this summer. And more importantly is the Government... View
show more show less
*Results are based on activity within last 7 days

@the_riotact @The_RiotACT
Some #Canberrans have had enough with the long grass have decided to take #mowing into their own hands. Are you one of these home-mown heroes? https://t.co/3Rrb07rtVi (1 hour ago)

@the_riotact @The_RiotACT
The ACT has recorded its 12th #death in the latest #COVID outbreak as well as eight new cases in the 24 hours to 8 pm last night https://t.co/L2fS7vdJgk (2 hours ago)

@the_riotact @The_RiotACT
The ACT has now joined every other Australian jurisdiction in formally #recognising the important role #carers play in the community https://t.co/WmKAW3ArHs (3 hours ago)