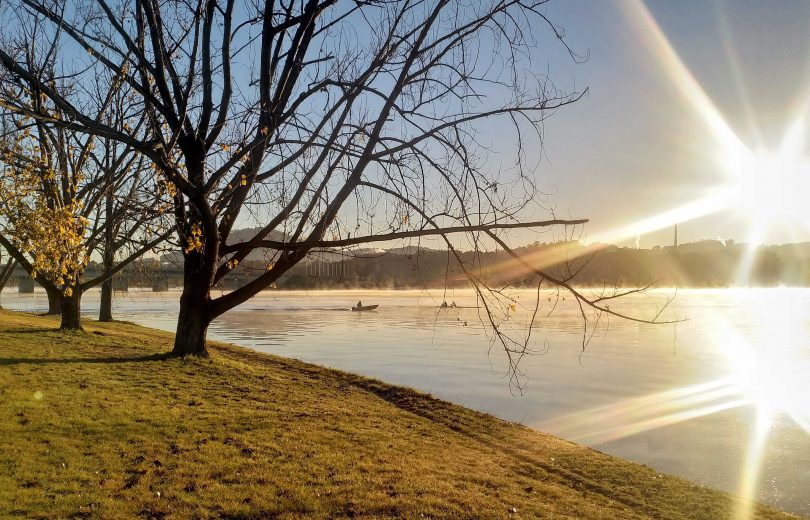 Those of us who have been scraping ice off their windscreens this week may find it hard to believe, but most Australians are in for a warmer than average winter according to the latest seasonal outlook released by the Bureau of Meteorology.

Southern parts of Australia could also find it’s a drier winter than average.

Bureau Climatologist Dr Lynette Bettio said this was consistent with observations from the past 20 years which show a trend towards drier than average conditions in Australia’s south during autumn and early winter.

READ ALSO: Calling Canberra CEOs: come and sleep out at the Arboretum

“Warmer ocean temperatures to the north of Australia may increase the moisture available, enhancing rainfall and resulting in a wetter than average dry season across much of northern Australia but, as it is dry season, rainfall totals will not be high.”

Autumn has been wetter than average for certain parts of the country including for most of New South Wales, southern Queensland and coastal Western Australia.

“New South Wales had its second wettest March on record with the extreme rainfall and severe flooding late in the month,” Dr Bettio said.

READ ALSO: Couple saves cattle from Braidwood bushfire only to lose them in flood

Canberra, on the other hand, recorded 25.4mm on 4 May and 12.4 mm the following day but little since.

It was the coolest autumn for most of Australia since 2015. In Canberra, the lowest maximum daily temperature recorded at the airport so far this month was 12.1 on 15 May, with the lowest overnight temperature of -5.4 recorded on 16 May.

“Cool conditions would have been felt particularly keenly by residents in inland NSW, which recorded minimum temperatures one to two degrees below average,” Dr Bettio said.

To determine above and below average the observed data is compared to data for the 1961-1990 period. This period is recognised by the World Meteorological Organisation as suitable for assessing long-term climate variability and change.

A great Autumn. Such a beautiful time of year.

Autumn was magnificent this year with the rainfall in summer giving the trees a boost and letting them retain their leaves!

it was good 'cept for neighbour's BARKING DOG !!!!

My electricity consumption determines how cold it is where I live. There is no guesswork in that and the result is it’s much colder.

Sam Oak - 10 minutes ago
Good, this will hopefully recoup some of the money spent on the light rail. Speeding fines are a tax on the stupid. Claiming... View
actcyclist - 28 minutes ago
So they’re didn’t bother to tell motorists during to grace period and I didn’t see one of those speed detecting signs w... View
Food & Wine 67

Sandra Hannah - 11 minutes ago
Love it. But would like to be able to know the individuals calories of them View
Business 4

PS O'Boyle - 1 hour ago
There’s already signs out in Bungendore saying it’s closed Mon-Thur 8-4 ... unfortunately I thinks it’s a done deal.... View
Brendan James - 4 hours ago
Ryan Hardy to cut down trees? Not sure that's a great idea buddy. View
Renee Mae - 4 hours ago
Ryan Hardy I agree, or start it back in April or May so it's done before summer really hits. View
Community 22

Vvek Dev Pant - 2 hours ago
public is the biggest helper in any means. government cannot reach everywhere where public can reach. View
Xenii Newnham-Kell - 4 hours ago
Sleepbus -helping those in difficult situations have a warm place to sleep. Sleepbus Queanbeyan is a mixed gender bus and is... View
Capital Retro - 5 hours ago
This is how "all that seldom used (and vacant) church property" is being recycled in Paris: https://www.thelocal.fr/20150615/... View
Sport 11

Stephen Saunders - 2 hours ago
Being able to watch whatever sport you like whenever you like is a huge improvement, long may it reign. For free, this is a g... View
Matt Brokenbrough - 2 hours ago
Commentator choices are great but the overall broadcast/streaming has been poor. 7+ doesn't use the 7 commentators rather tak... View
bj_ACT - 3 hours ago
Coverage and commentary excellent. 7app for Apple TV, last place in the heats.... View
Property 4

bigred - 2 hours ago
Yeah, I am only working on a small sample of 5 very recent local auctions of free standing houses. Amazing what you find out... View
News 5

Trish Casey - 3 hours ago
In civic OnMonday 3 people walked passed me in suits smoking pot which stank and could smell itonmy cloths View
Paul Berger - 6 hours ago
Mazzie Woodward I guess you have trouble with basic comprehension, the article was talking about making it harder for childre... View
Property 7

chewy14 - 3 hours ago
Grumpymark, Yes that's what I'm thinking, this proposal strikes a good balance of a number of competing interests. Not perfec... View
Capital Retro - 4 hours ago
The golf club should become a rugby union club and then the government would give them everything they want, just like the fo... View
GrumpyMark - 5 hours ago
“We are not against urban infill for medium density housing – but not on land so critical to our wildlife and our local c... View
Breaking 4

GrumpyMark - 5 hours ago
Absolutely, Oiledpengu - like many offences (like, for example, drug smugglers) those caught are only the tip of the iceberg.... View
GrumpyMark - 5 hours ago
Agreed. It’s time to up the ante on these selfish ignoramuses and charge them with a criminal offence, such as reckless end... View
show more show less
*Results are based on activity within last 7 days

It's idyllic, really. Rolling hills, plenty of fruit trees, a veggie garden and, at the heart of it all, a...
Courts & Crime 1

The son of a notorious Canberra killer has escaped spending extra time in jail after he was sentenced over driving...
Breaking 2

Let's be clear from the start: repealing federal legislation to allow the ACT to legislate on voluntary assisted dying is...
News 146

Australians have been devouring the humble meat pie for hundreds of years. There’s something so satisfying and comforting about the...
News 28

Canberrans are being urged not to flush away the ubiquitous wet wipe in a bid to reduce the amount of...
Community 22

@The_RiotACT @The_RiotACT
Pauly New is set to be reunited with his beloved companion Bruiser. But the good news doesn't end there https://t.co/pfGpCcDwpG (56 minutes ago)

@The_RiotACT @The_RiotACT
With data indicating up to 3000 children aged between 15 and 19 are at risk of homelessness in the ACT, mental health and community organisations have called for urgent funding to address the root causes of youth mental illness https://t.co/zUGddp7eiI (2 hours ago)

@The_RiotACT @The_RiotACT
The @natfolkfest has been thrown a lifeline as it gears up for a COVID-safe event. Find out what's changed https://t.co/SgMublDZQO (3 hours ago)