At the bottom of Dundas Court, Phillip, on the old Woden Transport Depot building, has appeared some graffiti. It’s a retro image that harks back (as retro tends to) to an earlier age of video-gaming. 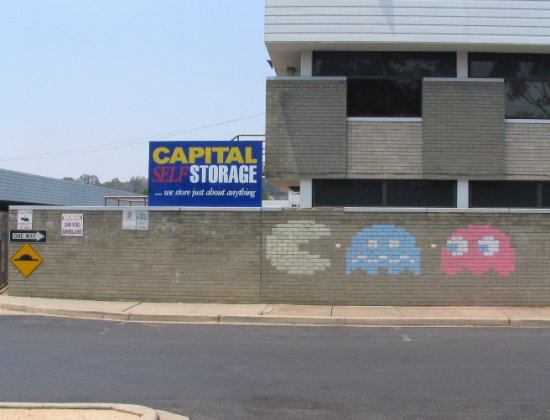 I’d like to congratulate ‘TWO DUMB KIDS’, who I’m assuming did this, as that phrase appears next to Pinky.

With this simple, but effective, image they’ve brightened up the area considerably. They’ve also chosen chalk as their medium which means that it can be more easily removed if someone wishes. Though I do hope no-one wants to remove it. Let’s just let the weather do it for us, hmm?

I’m hoping to see more work like this around Canberra. It sure as heck beats tagging; and is less of a vandalism issue than those that use paints.

I’ll never get to go past ian bell for inventing the best game ever. L33t. (yes the 733T term we use so regularly refers to an actual game).

He has made it avaliable on the net for free – just google his name or the name of the game. It’s also avaliable for PPC for the rich techies who read this site.

For me, I’m waiting to find a blue portaloo so I can give rise (stencil) to the new doctor, Dr Poo and his Turdis.

Checked out MAME as suggested – sounded way to much to bother with all the emulator stuff, thanks anyway.
There are Miniclip versions of all these games and better that work right in Windows and they are all free. Even the dreaded Asteroids…

That’s Gold. I love it. Kudos to the people who made this.

Reminds me of this Pacman gem.

love it, if only all Graffiti was so cheerful

My 6yo found a Pacman on the net – I’ve been hooked all over again…
Love the chalk medium – these kids have got style.

Was that the series of Space Invaders ones, Sammy?

woot. Now someone needs to do that to the civic talking wall, and get the music in there with it. 😛

Yeah, it is cool. Someone did something like this years ago in NY, but on a much grander scale.

That is so cool. I’m going down there now to check it out. Nice spotting dlw!

Saw this a little while ago and personally I thought it was really cool. Now all we need is frogger!

@The_RiotACT @The_RiotACT
Rachel Greaves and husband Gavin McKay launched @CastlepointSys2 about 18 months ago and have grown from just them to a 16-strong outfit with 20 clients across government and business https://t.co/NUcOwCMS7T (20 minutes ago)