Images of Canberra theme of the week – Stencil Art 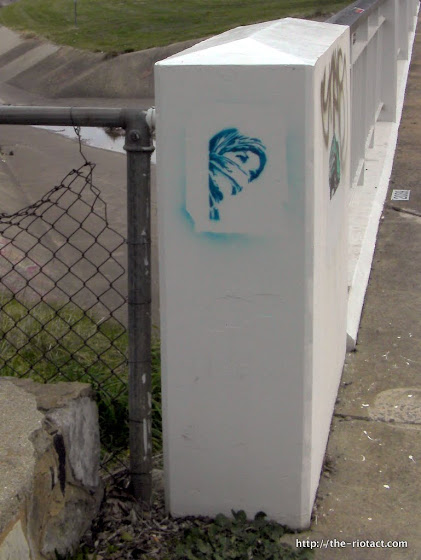 Another week, another photo theme. Canberra is filled with striking/funny/beautiful acts of stencilled vandalism.

Above is one of my favourites. If you’ve got one take a snap of it on your phone, or lovingly light and compose it with your pro rig as the whim takes you.

Then email it to images@the-riotact.com

At least when the Vietnam war was on, I didn’t mind the graffiti, as they had something to say, but this crap is boring!

imho fail. if you’re going vandalise public property with stencils, at least do a proper job

i am a total fan of street art but agreed that the overspray on edging detracts from the result – having said that i am hardly an expert (not even an amateur). loving the growth of genuine street art that actually communicates a message or concept as opposed to the previous proliferation of dull, mindless, completely uncreative and unappealing tagging graffiti in our fair city.

Painting by numbers for vandals. I fart more artisticly than that.

Is the effect aural or visual…?

Painting by numbers for vandals. I fart more artisticly than that.

I reckon the over spray adds to the look. It should be a bit slap-dash in that context, shouldn’t it?!

They need to either use a larger stencil, or exercise more can control.

clearly, this work is expressing the emotions of confinement, articulated by the border of chaotic melee, disenfranchised from ubiquitous uniformity by its rebellious dissent implicated in the seeming lack of standard craft and technique. the draping of the cloth around the subject’s cranium and mouth binds together the enforced absence of both thought and its oral articulation, which lends itself to the medium of vandalism encapsulated in the grafitto on a public artefact. the location, too, speaks of the fluid waste with which this image engages in serious and earnest discourse, being over a waste water drain; a gender discourse seething with intent on an artifical construct of man’s resolute and purposeful concrete, channelling bare nature through the urban landscape like winds of a dessert that might whip up sand, ultimately necessitating the depicted garb as a cultural norm – here manifested as oppression, not celebratory triumph of man’s capacity to circumvent the natural elements, and persist.

I reckon the over spray adds to the look. It should be a bit slap-dash in that context, shouldn’t it?!

Masking! It’s not just for the professionals.

I prefer to mount my stencil in a big firm cardboard or plastic sheet so there’s no risk of a colourful border around my art. All you need is a stanley knife (mine has butterflies on it) and some high quality sticky tape (depending on your materials.

What is that supposed to be, a mummy’s knee?

i quite like some of these stencil art instances of vandalism…

They need to either use a larger stencil, or exercise more can control.

A stencil art related story from the Onion I read just yesterday.

You know your particular form of artistic rebellion has jumped the shark when you can walk into a bookstore and buy a shrink-wrapped collection of laser cut stencils in the art section for your vandalising pleasure.

Peter Graves - 4 hours ago
One significant fact and feature was omitted in this article and was only apparent by a careful reading of the sign in the to... View
Nick Swain - 5 hours ago
The location of the Mt Ainslie tradesmen's camp is a little unclear. Corner of Ebden and Chisholm Sts could be where the ACTE... View
TimboinOz - 7 hours ago
Hi Marg, Honour and Michael were close friends of my Mum and Dad from just after WWII onward. They were among my retreat opti... View
Lifestyle 2