In retrospect – Pimps and P*rnstars at Corroboree Park 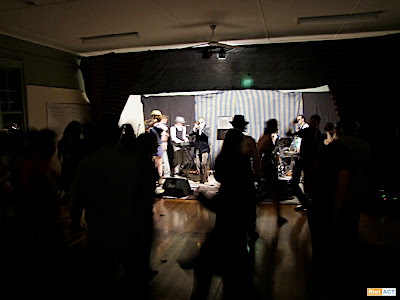 I had feared that the Canberra Musicians Club had jumped the shark with a Pimps and P*rnstars themed CD launch for a rap album.

But with the genre heavily subverted by large numbers of blokes dressed as female adult entertainers, general good humour all round, and a mixed line up of music it all worked surprisingly well.

Professor Anarchy kicked things off with his personal tales of American inner city life and caused a splash. Throwing a tantrum and hurling his microphone to the ground before storming off ensured more attentive stage management and he was eventually coaxed back on stage to finish his set.

Sanji de Silva lectured the audience through a candle lit earth hour (and even played a couple of songs).

Mechanical Pterodactyl are a band to keep an eye out for, sounding a bit like Karma County their Melbourne based vocalist has an amazing deep voice and kept the audience mesmerised.

There were breakdancing competitions, prizes for best costume, and then the dance floor kings Los Chavos rocked the Corroboree Park hall with a Village People themed set. If you like Cat Empire then definitely make the effort to check out Los Chavos.

Having gone with some trepidation I was pleasantly surprised by what a fun night it turned out to be.

Bellelis Australia - 1 hour ago
Phillipa Leggo thank you. Can't wait to see you in the shop to show you around 😊 View
May Mac - 17 hours ago
The only reason we switched to landfill nappies was the struggle to keep line dried reusables from stinking of woodsmoke in w... View
Phillipa Leggo - 18 hours ago
Well done Olga Imbriano - lovely article👏👏👏 View
Food & Wine 24

jorie1 - 12 hours ago
Of course the ACT government wants more and more apartments as they are only interested in how much money they can gouge from... View
Ol L - 17 hours ago
NOVEMBER 11 2019 - 12:01AM Canberra is home to the biggest houses but the smallest units, new report shows... View
chewy14 - 18 hours ago
Capital Retro, The median price for apartments and townhouses is significantly less than for detached dwellings. So if the pr... View
News 44

Jordan Amber - 14 hours ago
Anthony Gordo the club has to diversify away from gambling based revenue business models and as part of the ACT Government re... View
Peter Morales - 18 hours ago
David Malcolm WTF should they View
Peter Morales - 18 hours ago
The kid's ain't got a chance to voice themselves against a drug and gambling organisation especially when their backed by loc... View
News 9