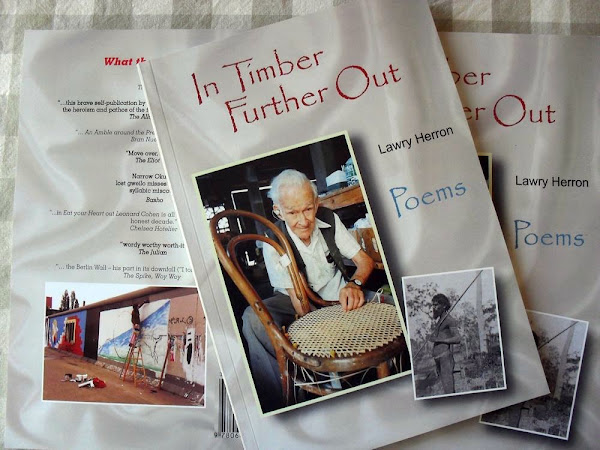 This in from Paperchain Manuka about the launch of local author Lawry Herron’s book of poetry:

‘In Timber Further Out – Poems’, is self-published by the writer, Lawry Herron, a former international lawyer and diplomat, later member of the Refugee Review Tribunal. He is now retired but works on a casual basis as a mediator. Lawry says of his book:

“The poems cropped up in some exotic places since I travelled a lot and lived in London, Vienna, Warsaw and Nairobi, in between terms in Canberra, and I experienced a few dramas: the aftermath of the bombing of Iraq’s nuclear reactor and of the Chernobyl meltdown; the collapse of the communist system in Poland, the German Democratic Republic and Czechoslovakia, where I served at the time; the massacre of Tutsis in Rwanda and being trapped in Burundi for a week by a fatal military coup.

The poems thus contain some political elements and the subjects range from the existential and the topical to the domestic and the personal. They also draw on my country background as a child and, later, farmer on the Darling Downs. They are in various forms, rhymed and unrhymed, free-form and formal, from sonnets, ballads and a villanelle to haiku. Some have been published elsewhere, a couple have won poetry competitions, others were highly commended. Essentially they are accessible and certainly are not intended to be fashionably cryptic or over-intellectualised.”

Margaret Harries - 23 minutes ago
What a fantastic house and property, I love it,wonder what’s the price their asking for it View
News 19

Anne Maree Crowe - 33 minutes ago
I feel for these people who have lost their water aerobics classes. Many elderly and people with mobility issues rely on swim... View
Margaret Edwards - 3 hours ago
That’s where I fell in love with aqua aerobics many years ago. View
Tracey Crump - 3 hours ago
Lizzie Parlane I think the pools will remain open (post lockdown) but the fitness programmes, including aquarobics will cease... View
News 18