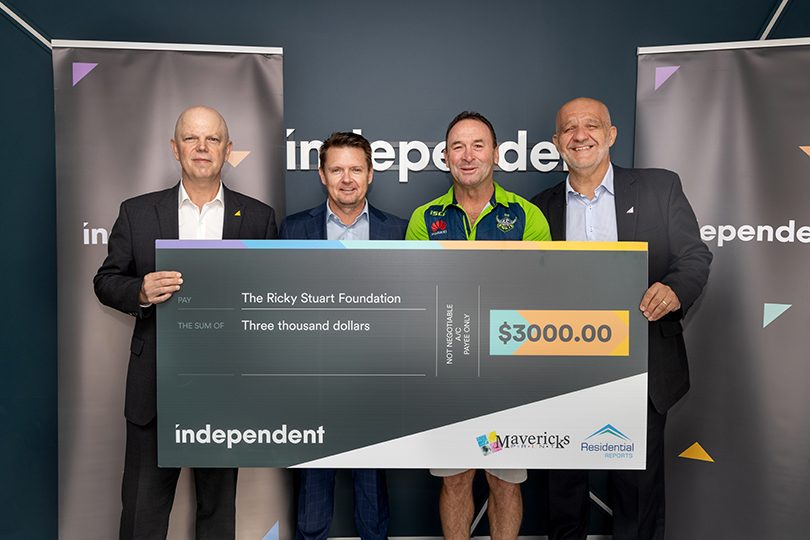 Autism is a lifelong disability and most people with autism will require varying degrees of support throughout their lifetime. The daily struggle of living with an Autistic person can be draining for many families. Recognising this, ACT real estate company, Independent has donated funds raised at a charity trivia night held late last year to The Ricky Stuart Foundation.

A cheque for $3,000 was presented to Canberra Raiders Coach and Chairman of the Ricky Stuart Foundation, Ricky Stuart by Independent Chief Executive Officer, John Runko, on Wednesday (March 11).

“There is a massive need for respite housing for families caring for people with Autism. Ricky has done an amazing job with this foundation and we are pleased to provide ongoing support,” Mr Runko said.

The Ricky Stuart Foundation was created from Ricky’s own family experiences of autism, his daughter was diagnosed with autism. Ricky understands the care and special services that a family needs to help support their loved one can be financially and mentally draining. The Foundation’s goal is to directly support the after-care for autistic people and help families who struggle daily with autism.

Independent provides real estate services for Canberra and its surrounding regions. The company has been operating in Canberra since 1958.

“We wouldn’t be where we are today if it wasn’t for local community support. We care deeply about our city and so we make it a priority to be involved with local community and charity organisations. Proceeds from every sale goes to the foundation. It’s our way of giving a little back to the city that has given us so much,” Runko said.

“We set up our foundation to assist vulnerable people in the community. Over ten years later, the foundation has distributed over a million dollars to the local community.

“Our staff regularly volunteer with local groups, taking time out of their day to help when there’s a fundraising event, or to participate in fundraising activities.”

“The donation to The Ricky Stuart Foundation is another example of our team throwing themselves into projects that make a difference any time we get an opportunity to do it. We are thrilled to help those less fortunate and play a part.”

Pleasing to see one of our real estate firms supporting the Ricky foundation.
I trust other firms are lining up.