A couple of years ago I used riotACT to recruit some Canberrans for a photography documentary/portrait project. Here is the result, finally online. See if you can spot anyone you know. 😉 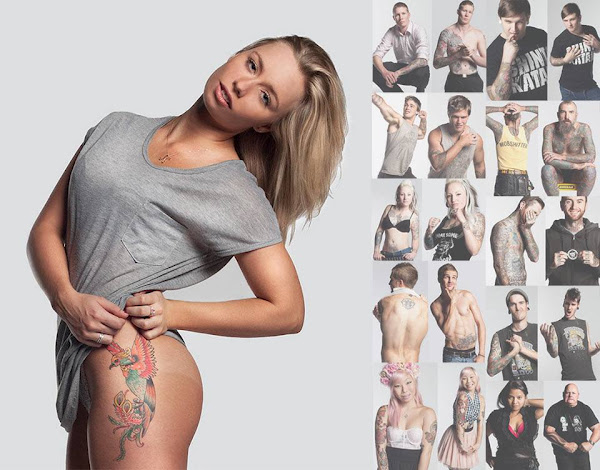 A really beautiful girl with a real sad story. Her words appear below. Tattooed Canberrans reveal the stories behind their ink: http://danielspellman.com/2013/09/tattooproject/

I got my tattoo after 4 years of contemplation. Over the 4 years I lost my best friend from highschool, RIP Daffy… he committed suicide. A year later, I lost my ‘brother from another mother’, an American soldier killed by an IED in Iraq, 2 weeks after his 21st birthday… RIP Charlie. 2 months later, I lost my childhood best friend to a severe asthma attack… RIP Michelle. A year after that, I lost my grandfather, who had a long term illness and who I had cared for throughout his deterioration… RIP Grandpop. 2 months ago, I lost my training partner; 20 years old, an aspiring actor, talented archer and incredible person…. RIP Leo.

By that stage, I’d been contemplating a memorial tattoo forever, however it was never going to be a phoenix until I lost Leo. Over the 4 years I’d battled mental illness after each death, depression became an issue, as a nurse and generally bright and bubbly individual who was always the rock, that wasn’t acceptable. I battled in silence.

The image of the phoenix appeared shortly after Leo’s death as a symbol of hope, rebirth, renewal of life and reminded me of each person I’d lost in a different way.

Every comes together in this gem from Natasha:

Tattoo on my pelvic bone – Haraam is an Islamic word. It’s commonly known as meaning ‘forbidden’ or ‘sinful’ but it also means ‘holy’ or ‘rare’. I wanted something that combined my religious heritage (Islam) with my race (Bengali) so I picked an Islamic word but had it in Bangla script instead of Arabic. I chose ‘haraam’ because the yin yang meaning of the word appealed to me. But I also chose it because tattoos are considered haraam (as in bad) for Muslims and that kind of appealed to my rebellious side.

I feel sorry for that poor woman’s loss and suffering. I lost a couple of friends when I was young, and the sadness is still with me 30 years later. So if she wants to get at tattoo to commemorate her lost family and friends then good on her.

Mrs LSWCHP hates tattoos, but I don’t care too much either way really.

Most of the rest of that crew seem like imbeciles. One bloke said “There are only two groups on earth. Those that are tattooed and those that aren’t. You immediately join a sort of exclusive club.”

Yeah right. You join the exclusive club of bazillions of idiots who have really dumb tattoos. That’s what I call exclusive, yes sirree bob. The only people who are excluded from that club are intelligent people.

Not to mention the Mobshitters bloke. Now, IIRC, the Mobshitters were an insignificant Sydney bikie gang of perhaps ten blokes who were slightly involved in the Milperra massacre, and who were then forgotten. Maybe they were forgotten because of their name. Can you see the conversation…

— Sir, I’m attracted to the outlaw lifestyle and I’d like to join your bikie gang. What is it called?
— The Mobshitters.
— The Mobshitters!! WTF? Why are you called that?
— Well..ahh..we like to get together. Like…in a mob, you know. And then we…ahhh…
— Oh Jesus…eeewwww…..stop right there. Do you have the Hells Angels number?

Surely surely surely there are some people around Canberra with tatts who are brighter this this crew and have more artistic ink.

Mick Andrews - 4 minutes ago
Honestly I love doing 85 on the parkway, il stick too it😆 View
Brindie - 2 hours ago
Given that our main roads are so congested (Tuggeranong Parkway; Adelaide Avenue) and that our public transport system is so... View
Ol L - 3 hours ago
Canberra. If the traffic gets bad just put in more traffic lights, that’ll work real good…..check out Hindmarsh Drive Phi... View
Opinion 193

Adam Scott - 5 minutes ago
I regularly feel like the only one doing 40 in the 40 zones. Also do some drivers think that they use more petrol with their... View
Ali Light Alasady - 52 minutes ago
Tani Buist LEGIT HOW LONG HAVE WE BEEN COMPLAINING ABOUT THE IDIOTS ON THE ROADS View
Jon Rooks - 59 minutes ago
Kathleen Julia Gill. I see both. The problem with these online debates is people keep making blanket, patently nonfactual sta... View
Breaking 15

@The_RiotACT @The_RiotACT
ChooseCBR data reveals that some businesses processed more than 500 vouchers in the 25 hours the scheme ran, and almost 40 per cent of the vouchers were claimed at stores like grocers https://t.co/vVrNddImTH (24 minutes ago)