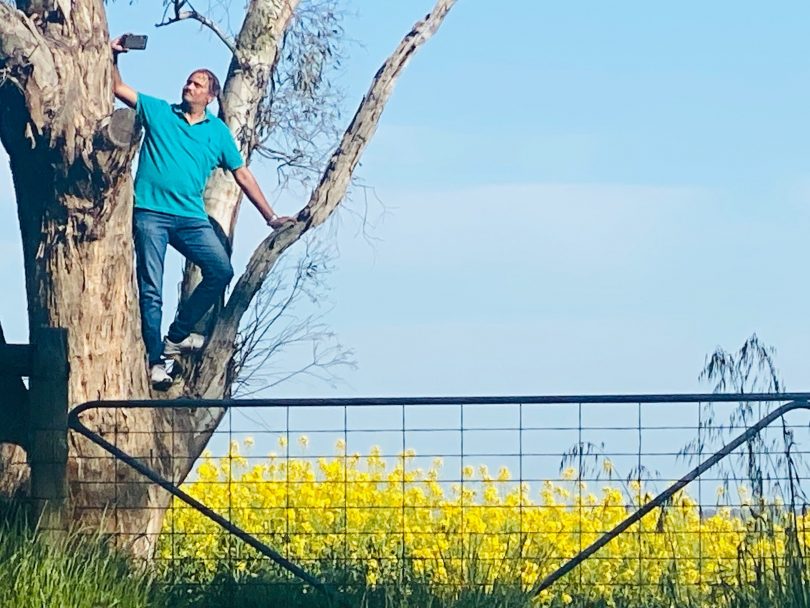 An adventurous photographer climbs a tree in a NSW canola field to take an Instagram-worthy photo. Photo: Ken Jacobs.

A New South Wales farmer caught this adventurous photographer halfway up a tree in his canola field in pursuit of an Instagram-worthy photo on the October long weekend.

Wallendbeen farmer Ken Jacobs found the man parked on a particularly dangerous section of Burley Griffin Way, a busy highway with trucks and cars travelling between Canberra and Griffith.

A few hours later, Ken’s brother, David, had to ask 20 people who had entered the paddock not to trample the crops. And to shut the gate.

Up the road in Young, Hilltops Mayor Brian Ingram said while “99 per cent of the time people were sensible”, some had parked in dangerous places and climbed over gates and fences to see the canola fields around Young, Harden and Boorowa.

“There are people who will stop only just off the road, over the top of a crest or on the corner of a road, and that’s a bit of a concern. Some days, there is car upon car-load of people out taking photos of the canola fields, but most people just take a photo from the car,” Cr Ingram said.

He said it was the responsibility of farmers and the police – not the council – to remind people about trespassing and driving safely. 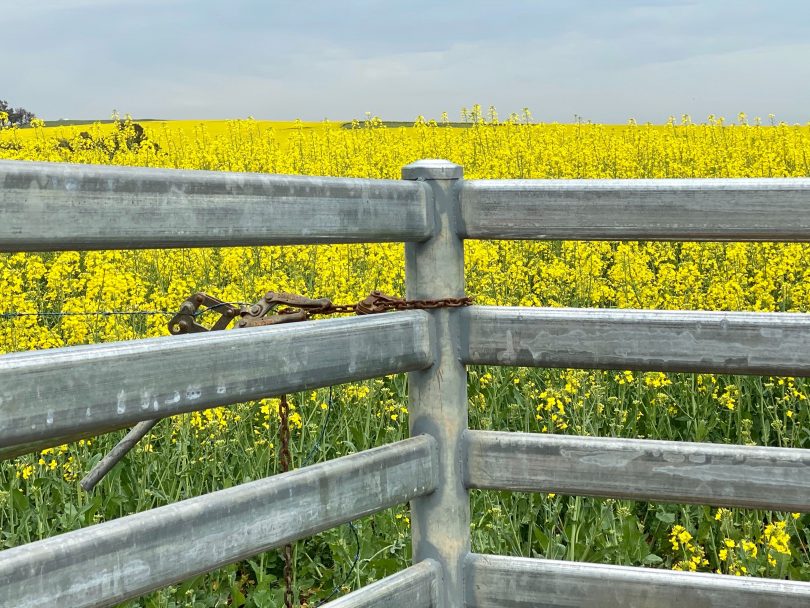 Councils are encouraging “people not to jump fences – that’s not what the Canola Trail is about”, according to Coolamon Shire’s Laura Munro. Photo: Region Media.

However, Cr Ingram said the council was eager to involve the canola fields in its tourism strategy.

The interest in Hilltops’ canola fields has been growing over the past few years as more people become aware of them, Cr Ingram said. 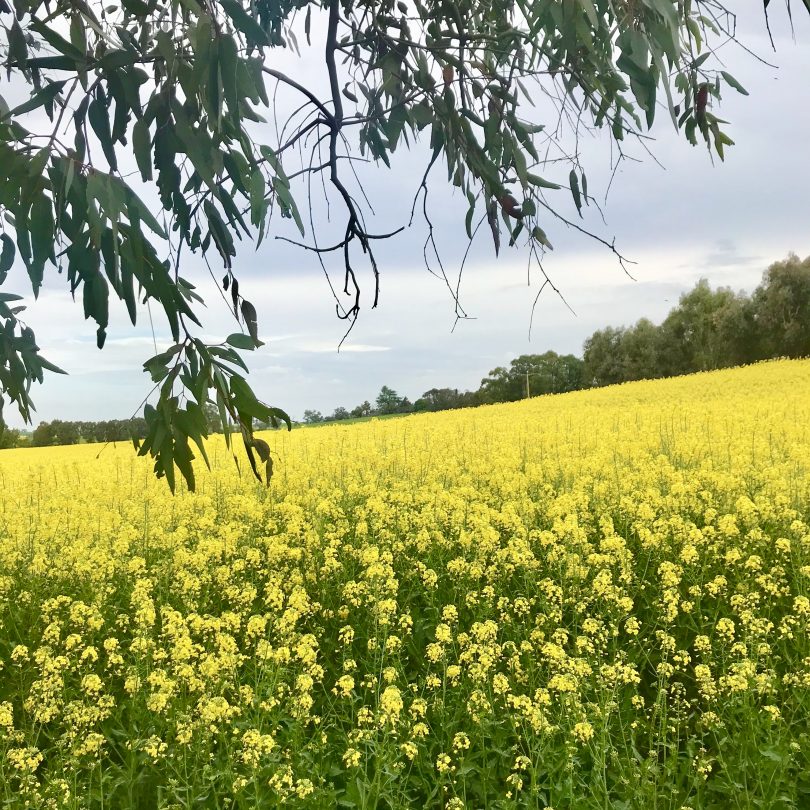 Canola crops are in bloom across the region. Photo: Genevieve Jacobs.

A canola trail could be tied into Hilltops’ existing food and wine trail or heritage and antique trail, Cr Ingram said.

“Hilltops Council is overhauling its tourism department and looking at new opportunities. Because of COVID-19, all the festivals had to be cancelled, so we need to be smart and see what we can do in the future – make sure we can attract the tourist dollar,” he said.

The Canola Trail in Coolamon, Junee and Temora has also been busier than ever thanks to a bumper season, restricted travel and a three-year marketing campaign, Coolamon Shire’s tourism and business development officer Laura Munro said.

“We’ve had a really good season, so the canola is looking really good and the fact that people can’t travel outside of the state has promoted regional travel,” she said.

Laura said that while she hadn’t received any first-hand reports of trespassing in local canola fields, her team regularly promoted safety messages on the Canola Trail’s social media.

“We encourage people not to jump fences – that’s not what the Canola Trail is about – it’s about connecting our towns via roads and people seeing the canola along the way,” she said.

“We tell people they can get an Insta-worthy photo without jumping the fence.” 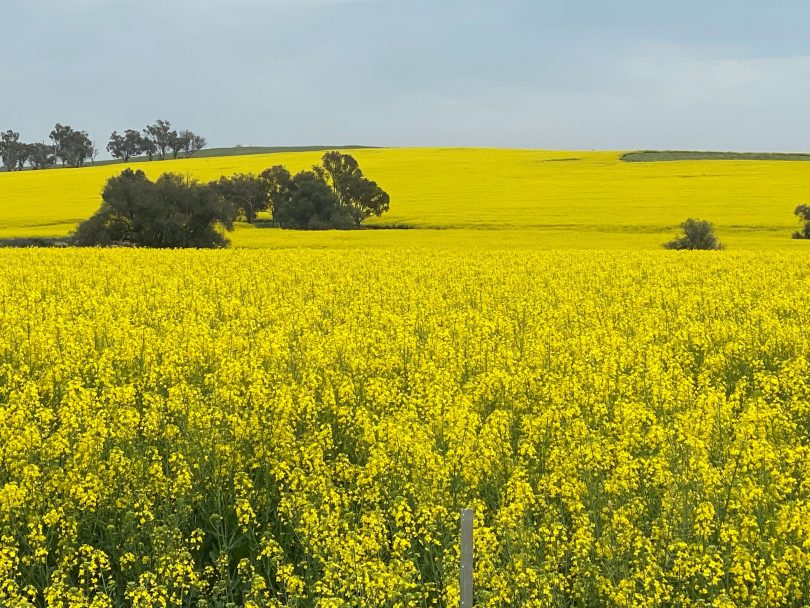 The Canola Trail committee – which has representatives from Coolamon, Junee and Temora councils – is also in the early stages of creating a map to highlight safe places to see the canola fields from.

“It’s difficult because where the canola is growing changes each year, but we have an interactive map on our website currently that shows people where they can go and that’s just from us driving around and identifying where there is a great crop and a safe spot to park.”

She said Canola Trails tried to partner with local farmers this year to educate tourists on the growing and harvesting process and why jumping fences can damage crops and risk biosecurity.

“We had no luck [finding farmers] this year but we’ll try again next year. Being such a good year, they were busy with that. It’s a good opportunity to highlight what our farmers do.”

To find out more, visit the Canola Trail.

A bit nuts. I spent years in the UK where these fields are all over the place - never made any sort of news. Also there were flax and linseed field which are vivid blue and purple. Maybe best if local farmers avoid those crops.

Martin McMaster so what do you want local farmers to grow??

Considering farmers are local no matter where they are, are they not

HOW ABOUT PEOPLE START TO RESPECT THE PROPERTY OF OTHERS N DONT TRESSPASS!!!!!

Ness Paterson yep the amount of crap drivers and people jumping the fences and walking in the fields on Saturday near Cowra was ridiculous.

jorie1 - 8 hours ago
Are you sure that it is current renters buying properties? The research I have read shows that many people who rent will do s... View
jorie1 - 8 hours ago
Hi Assiduous, I do agree that $500 per week is a lot of money - but the majority of that money goes to the ACT government in... View
assiduous - 8 hours ago
$500 per week is not low - it is enough to build a modest detached family home every 10 years. It is a reflection of Australi... View
show more show less
*Results are based on activity within last 7 days