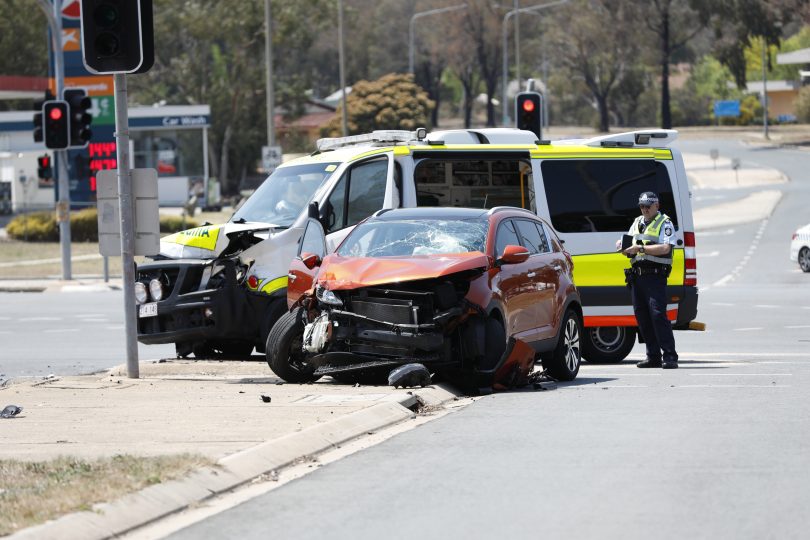 A police officer surveys the aftermath of an accident on Drakeford Drive at Kambah. Photo: Images Instantly.

Canberra Avenue has taken the dubious title of having the most motor vehicle accidents in the ACT, according to new data from insurer AAMI, which also indicated that the most common type of car accidents in the Territory were nose-to-tail collisions, accounting for 67 per cent of crashes.

Mondays were also the worst day on the road for accidents, especially during the afternoon period.

The AAMI Crash Index, which analysed 350,000 accident insurance claims across the country from 1 July 2019 to 30 June 2020, shines a light on the territory’s most dangerous roads to encourage drivers to remain safe and vigilant while behind the wheel.

There were six new entries in Canberra’s top ten, including Drakeford Drive at Kambah, which is the fourth most likely location for a crash. Other new hotspots include Haydon Drive at Bruce, the Federal Highway at Watson and the Barton Highway at Hall. 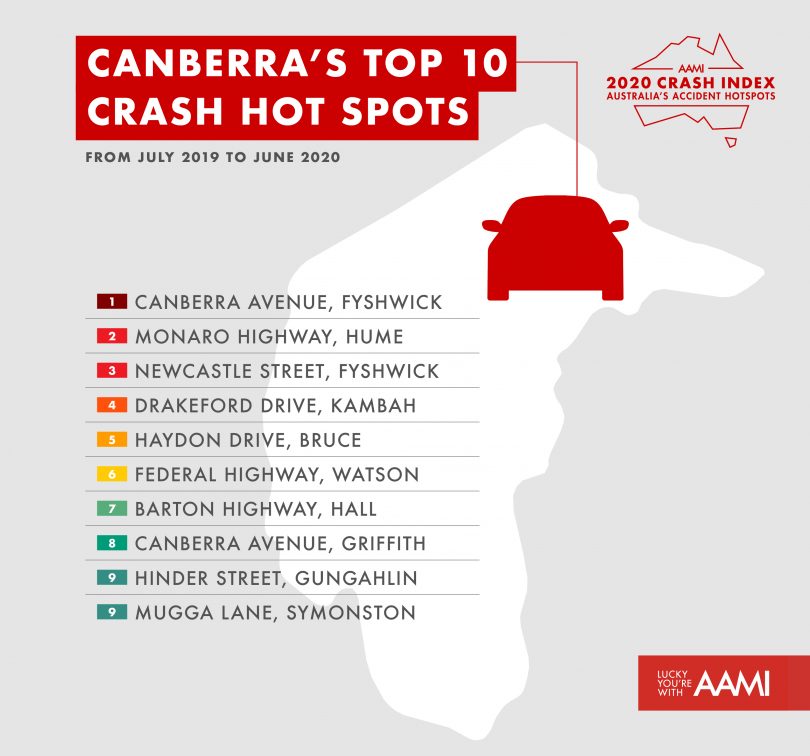 While there had been a decrease in the number of crashes during the COVID-19 lockdown, numbers returned to normal very quickly.

AAMI spokesperson Paul Sofronoff said the top two locations in Canberra have a long history fighting over the top spot.

“The top two locations have been battling it out for the number one spot for some time. Canberra Avenue at Fyshwick previously held the dishonourable crown as Canberra’s worst crash hotspot for three years from 2015 to 2017 with Hume’s Monaro Highway at number two, before swapping rankings for 2018 and 2019,” he said.

“In 2020, Canberra Avenue, Fyshwick has taken back the crown, but it isn’t really something for locals to celebrate.”

The AAMI Crash Index also found the afternoon hours between 1:30 pm and 4:30 pm were the worst times for crashes.

Stephen Saunders - 2 hours ago
For me, the right kind of war memorial is the sober VC plaques, all along the highway to Sydney. Close down the Afghan exhibi... View
Opinion 51

Valerie Foster - 2 hours ago
Too many speed changes in too many areas. It is revenue raising. View
HiddenDragon - 14 hours ago
An overly literal (or, perhaps selectively so) approach to the application of the criteria for different speed zones might ha... View
David Brown - 16 hours ago
Clinton Berry I don’t know of any accidents in the last decade. View
Lifestyle 1

Kathy Schneider - 14 hours ago
One of the highlights of the year! View
Sport 7

Robert Hawes - 17 hours ago
Robert Knight Agreed. It would be hard to make a good bus route though the suburb as it is isolated. Would be better if they... View
Robert Knight - 21 hours ago
You cannot plonk in a greenfield suburb, built all at once, with no dedicated public transport corridors, an inbuilt car depe... View
News 17

Jenny McInnes - 18 hours ago
Angelo Turcin Dr Encrico Taglietti designed the cinema and he won the Australian Arctetects Gold medal in 2007. Clearly you a... View
Trish Roberts - 18 hours ago
Thanks, Andrew! You would certainly know. View
Andrew Pike - 19 hours ago
ANDREI RUBLEV looked great on the giant screen but wasn't the last film. The very last film shown was a reprise of the very f... View
Lifestyle 1

Lynn Stape - 19 hours ago
so great. I was not aware they had a shop. Some really nice things for sale. I love the postcard for Gungahlin with the light... View
Community 41

John Hamilton - 19 hours ago
They have been paid for by rates and other taxes. So they have paid. View
Lynn Stape - 23 hours ago
John Hamilton sigh if you say so..look mate if you want the precious cyclists to be hated more then by all means make all the... View
show more show less
*Results are based on activity within last 7 days

As summer approaches, ACT police are warning us that more Canberrans than ever have been caught speeding. They say, rightly,...
News 61

Senator Zed Seselja has brushed off a challenge for the Liberals' No 1 spot on the Senate ballot for the...
Best of Canberra 42

@The_RiotACT @The_RiotACT
The ACT Government is looking to Build to Rent to grow the supply of affordable rental stock in the ACT https://t.co/vl2vySn8O6 (21 minutes ago)

@The_RiotACT @The_RiotACT
The response to allegations of war crimes raises questions about the politics of Anzac and our deference to the military, says Ian Bushnell https://t.co/UznTrp9FGP (3 hours ago)

@The_RiotACT @The_RiotACT
In this week’s newsletter we’re talking COVID, car crashes, Canberra’s newest suburb + one of the finest properties you ever will see https://t.co/utq8zjI7Mq (13 hours ago)