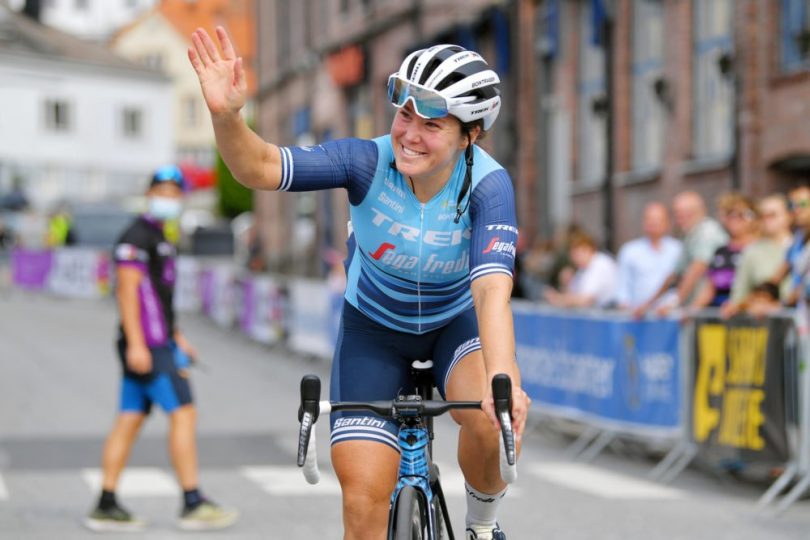 Chloe Hosking overcame COVID-19, crashes and heart problems to win stage four of the Ladies Tour of Norway on 15 August.

As she crossed the finish line she broke down in tears and struggled to speak.

It was a reflection of the emotional and physical roller-coaster that has taken over her life in the past six months.

Chloe crashed in a race in late March, before being diagnosed with COVID-19 a couple of days later.

“I felt like I had been hit by a bus,” she said. “I was mainly tired, just super tired.”

Having shaken off the immediate impact of COVID-19, Chloe set her sights on returning to international cycling in May. But there was then another hurdle to overcome as she was diagnosed with pericarditis, an inflammation of the heart sac.

The training required for her to get back to the elite level of cycling had to be significantly scaled back.

To make it to the start line in Norway was a feat in itself, and the six months after Chloe’s COVID-19 diagnosis carried emotional baggage few of us would comprehend.

As she fronted the media for the post-race debrief, that emotion came pouring out for all to see.

“I am just really proud of myself and also thankful to the team,” said Chloe. “To finish with a win in a World Tour stage race, wow, it was all worth it I guess.”

One of the reasons for her emotional response after the stage win was due to her isolation as she battled illness in Europe while her family was back in Canberra.

“It was more mentally tough,” said Chloe. “Australia is so far away and it is even further when we can’t get in and my family can’t come here.

There was also such a strong sense of relief for Chloe. But it’s not the first series of hurdles she has had to overcome in her cycling career.

In 2018, she won the Commonwealth Games road race after recovering from a crash in the Tour of Flanders in Belgium just one day before flying to the Gold Coast.

After the crash, Chloe was cleared of a broken shin, released from hospital, and was on the plane to Australia. She won gold a week later.

This was the same year in which she successfully appealed against her non-selection for the 2018 UCI Road World Championships in Norway.

Chloe is clearly a tough individual who is not to be underestimated.