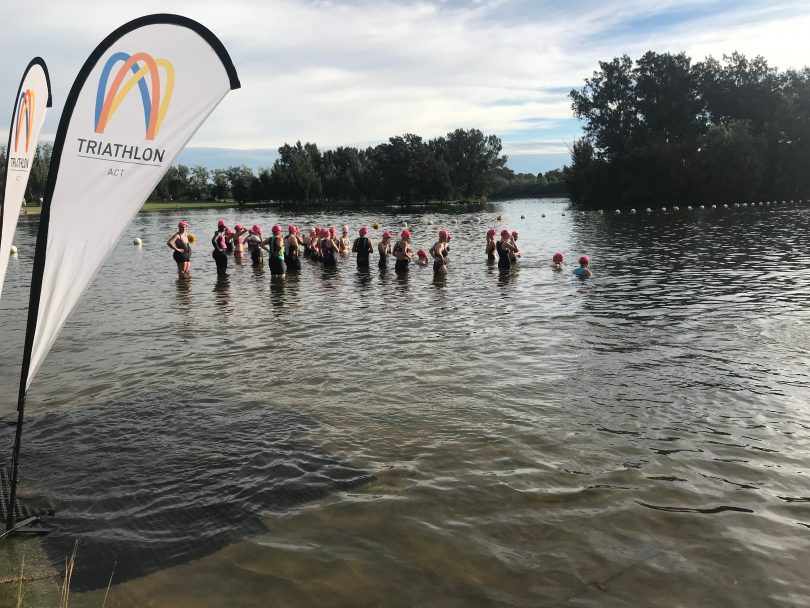 Triathlon ACT has been running events and training at Tarcoola Reach for many years. Photo: Supplied.

I am all for more activity on Lake Burley Griffin if environmental impacts have been considered and if it does not impact on existing users.

Currently, the most active sports on the Lake are the sailing clubs, rowing, dragon boating, canoe and kayak paddling, and triathlon.

But Triathlon ACT believes its activities could now be under threat if the proposed Canberra Aqua Park goes ahead on the planned site on Tarcoola Reach on the Black Mountain Peninsula. The proposed site is south of the Radford College rowing shed.

The Aqua Park involves an inflatable obstacle course anchored to the lakebed on Tarcoola Reach. This is the same piece of land used by Triathlon ACT for events and training for the past 30 years.

The reason why this piece of lake real estate is so valuable to water-based activities is simple; the water quality is better here than many other locations on Lake Burley Griffin with the impact of blue-green algae minimal.

So it has become one of two areas on the Lake used for triathlons. The other site is Rond Terrace. And the sport of triathlon in the ACT is experiencing significant growth with participation up by 66 per cent for the period between 2014 and 2018.

The time frame proposed for use by the Canberra Aqua Park group is November through to April, which also happens to be the time when the area is used by triathletes.

I have also spoken to Rowing ACT about this proposal. They are concerned about the proposed location of the water park with their main worry being overcrowding on the site. Car parking is already at a premium during regattas on weekends in the summer months with three rowing clubs having bases at the Peninsula.

The whole issue again raises questions about suitable locations for sport around the Lake because of the differing quality of water. Triathlon ACT has suggested the Canberra Aqua Park group have another look at Weston Park, West Basin or Yarralumla, areas already considered but rejected by the Aqua Park proponents.

Triathlon ACT is concerned that if the Aqua Park goes ahead from November this year it will cut the number of triathlons in Canberra by 50 per cent, which would effectively threaten the viability of the sport in the ACT. It would also prevent triathlon training, especially for novices, in the summer months at the Black Mountain Peninsula.

Also under threat according to Triathlon ACT would be the ability to stage major events such as the Australian National Triathlon Championship races and the National Youth and Junior Series events.

It will now be up to the National Capital Authority to adjudicate with Triathlon ACT prepared to fight to keep their sport at this location. The NCA is seeking public feedback with public consultation submissions closing on 3 June. Click here for more information and to provide feedback.

I can fully understand the NCA’s push to activate the Lake but all users need to be considered.

2 Responses to Is the triathlon under threat from a proposed Canberra Aqua Park?
Filter
Show all comments
Showing only Website comments
Show only Facebook comments

The area should be protected for earless dragon boating.

Can’t we do both ? except the swim section of the triathalon would become a kind of water-based obstacle course…

rationalobserver - 4 hours ago
The Government (PM&C - statistical value of a life) has a number for that. Once the combined costs (economic, social and envi... View
rationalobserver - 4 hours ago
Actually, the data shows that the only domestic violence related increase we have seen was the noise from DV advocacy groups... View
Brianna - 17 hours ago
Oh so true. The selfish actions of a few are greatly impacting the many. I am compromised, my husband is under going chemo. T... View
Food & Wine 12

Jude Lou - 5 hours ago
Are there at least 10 layers? Wowww View
Public Sector 15

Angela Hunter - 5 hours ago
Could someone please tell the dept of Home Affairs that it's almost almost 2022. Next they'll be bringing back tea ladies and... View
Ally Ryan - 6 hours ago
Dresses are not allowed wtf View
Mark Johanson - 14 hours ago
WOW, home affairs obviously have a lot on their plate! Talk about the big issues! View
News 3

Blake Anthony Cross - 6 hours ago
If you counted every government job as a tax taker instead of ... a job, there really isn't very many jobs here at all. View
News 21

MERC600 - 6 hours ago
Tickle there was a Minder episode where Arthur was out at Hounslow, and every time a plane came in over him he'd duck down. H... View
Aaron Perryman - 13 hours ago
Dont worry you won’t be able to hear the planes over the whinging. View
jetabe - 14 hours ago
These concerns are not reflective of the current state of Jerrabomberra nor the pace of growth in Canberra and this region. C... View
show more show less
*Results are based on activity within last 7 days

A good friend of mine is moving to New York. She's spent the last six years in Tokyo and is...
News 110

Motorists are being asked to avoid roads near the National Arboretum from 12:00 noon today (22 July) as police continue...
Community 13

The building of light rail Stage 2A is about to make itself felt with two ACT Government car parks in...
*Results are based on activity within last 7 days

No train without the pain. The north had its share; now it's the south's turn. That's what Canberra drivers and...
News 110

It's hard to imagine anyone wanting to live in Australia's most haunted house, but Monte Cristo Homestead in Junee hasn't...
Food & Wine 36

@The_RiotACT @The_RiotACT
Women's AFL in the capital has received a major boost with the announcement of a new partnership between the @CanberraSCC and @AFLCanberra https://t.co/WDvJUpRvTa (2 hours ago)

@The_RiotACT @The_RiotACT
Tampons and pads are already available at schools across Canberra, now Yerrabi MLA @SuzanneOrrMLA wants to make it easier for all women to access period products in the ACT https://t.co/O1VjFyzyyH (3 hours ago)