It must be a trap… The front yard gnome 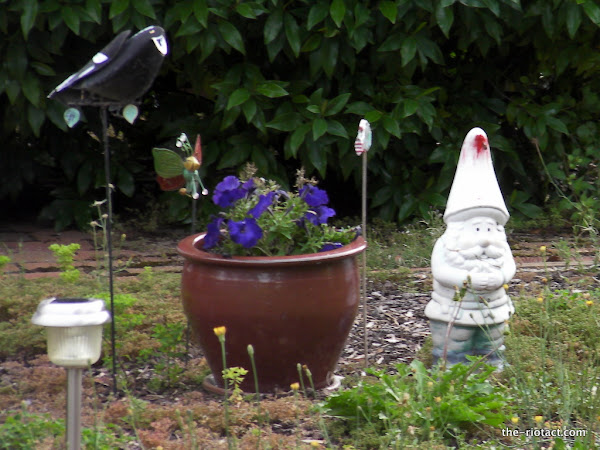 Deep in student country in Canberra’s Inner North I met this little fellow sitting in a front yard.

The house is set up so they don’t even have any windows looking over their gnome.

So rioters with nasty minds, what would you have done to the gnome to punish the light fingered?

Isn’t that Gerald, the gnome in a home not free to roam, in a yard across the road from the block behind Peter’s, you know, the house with the wooden windows painted over some years ago by that painting chap who wouldn’t lock his ute and consequently had Jimbo and Steve running down the street with fags stolen from his dashboard, you know, the one under the pair of dice hanging from his rear view mirror that he used in his lunch break to check out the teenage daughter of the academic who lived down in Foveaux Street but who liked taking her shorts and tiny tank top up the mountain for her exercise so that the guy in the bakery at the shops would notice her as she cruised past on the footpath with her oh so immature girlfriends all dressed up in their Merici uniforms proving beyond doubt they they were not povos from down near Davenport Street as some unkind Grammar girls were want to attest? Or have I got the wrong place in my mind’s eye?

Oh please, a little hint maybe. or maybe you could just tweet it into the clouds ?

A point to you, Mr Antagonist, Sir.

How do we find this garden? My gnome Mr Gnome is already packing his suitcase.

Let us go in the other direction. I challenge Rioters to add their gnomes to this garden.