It’s a leap year, so it must be time for the Rat-lympics! 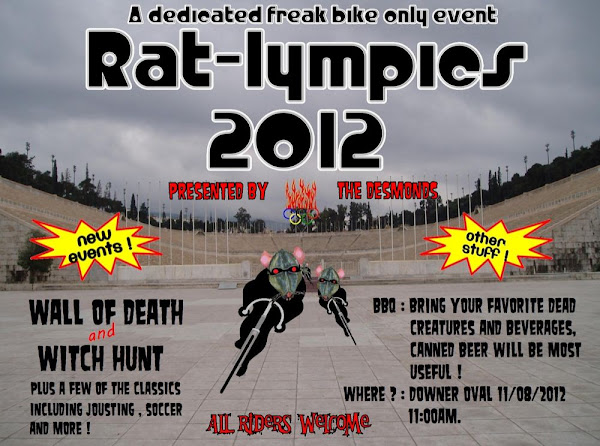 2humpZ has sent word that the Rat-lympics will be taking place on 11 August at Downer Oval.

If you’re interested in Canberra’s only truly worthwhile cycling subculture, or just like seeing people trying to do things on funny bikes, or just like beer, it will be well and truly worth checking out.

6 Responses to It’s a leap year, so it must be time for the Rat-lympics!
Filter
Showing only Website comments

I will no doubt be wearing my weight-lifting lycra for this event.

Isn’t that, like, one of Borat’s favourite outfit? Is it even legal??

I liked the other (classical-stylee) 2012 poster much better. This is how we did Rat ‘Lympics in 2008: http://www.rat-patrol.org/RPOz/rides/ratLympics2008.html

I hardly think many Rat Patrollians in Oz think of themselves as being in a worthwhile cycling sub-culture… afterall, we are a drinking club with a bike problem rather than the other way around.

I will no doubt be wearing my weight-lifting lycra for this event.

Nevermind the sports crap, will Rat Patrol Oz be appearing at Corinbank Take Two in November…???

Obviously designing ‘crazzzzzy’ bikes uses a different part of the brain to designing a decet poster.

dolphin - 36 minutes ago
whatever happened to encouraging flexible working? I don't know many people who want to return to working 5 days a week in th... View
ACT Election 1

dolphin - 46 minutes ago
bit late to be submitting policies to treasury for costing... heaps of people have already voted... View
ACT Election 5

dolphin - 48 minutes ago
and Scott Morrison can't tell the difference https://reneweconomy.com.au/on-first-day-as-pm-morrison-learns-difference-betwee... View
dolphin - 51 minutes ago
Just remember that the Belco party are just a front for the Liberals trying to siphon off enough votes to get the libs over t... View
Opinion 9

dolphin - 56 minutes ago
You missed the point on this one - nothing wrong with bringing a bit of life and vibrancy into the city. it seems like you're... View
HiddenDragon - 5 hours ago
"...once again, we’re being told that the way to enhance Canberra’s vibrancy is to mimic other, bigger cities across the... View
Brisal - 10 hours ago
If it helps to revitalise another of those dingy laneways then I'm all for it. Scoff if you like but if it ultimately turned... View
Food & Wine 34

Brisal - 10 hours ago
“I drive past the avenues of corflutes thinking how, aside from the currently elected, I don’t know a single thing about... View
News 1

Capital Retro - 11 hours ago
Anyone been watching Ozark on Netflix? View
News 5

bj_ACT - 14 hours ago
It was always a bit funny when Turner residents were complaining about extra buses when whole swathes of suburbs lost their b... View
chewy14 - 14 hours ago
Honestly, is there anything more NIMBY than worrying about the "city coming for their neighbourhood" in an area less than 1km... View
HSewell - 15 hours ago
Good result View
News 18