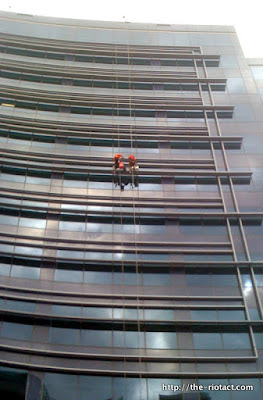 The new DEEWR building on the corner of Rudd St and Marcus Clarke St is getting the finishing touches and they’ve even given the footpaths back to the public as Civic West’s latest black glass behemoth nears completion.

On Sunday these blokes seemed to be quite enjoying rappelling around the building getting the glass just right.

The site has come a long way since 27 October 2008 when the foundations collapsed. 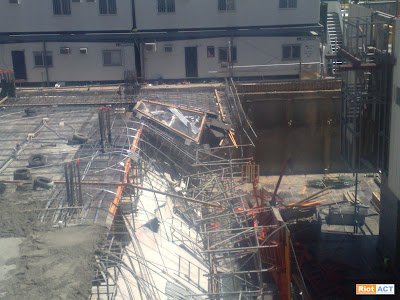 I live in hope that one day Canberra will have an interesting office building. Given the number of new buildings in the last few years I thought it might happen, but have been pretty disappointed.

Do we have the most boring CBD in the world (architectually)? (excluding the Melb and Syd buildings, which at least have the potential for being interesting, if only they werent surrounded by large boring roads and boring buildings)

Still, at least the DEWR building is better than the one built where the workers club used to be. I mean, putting orange stripes on your curtain wall does not make a building attractive – and that is the highpoint of the design. Looks like someone copied the DIAC building in Belconnnen, which rumour has it (from DIAC staff) was built as cheaply as possible.

It’s a hideous looking building. I like to call it a big box, though it’s more of a rectangle..

From what I have heard, the DEEWRnites won’t be moving into it for another month or so because of the lack of office electronics and computers. I hope the department aren’t using our money to fund the security guards that have been sitting in the foyer of the building 24/7 for the past 3 weeks to stand guard over an empty building, except for some office fittings. I also hope that we are not funding the washing of said empty building’s windows, which has occurred almost 10 times over the past month.

to follow up my own comment – walked past during the ‘daylight’ (such as it is today) and realised the installation is a map of the world; more specifically a globe cut out in some unusual (but no doubt highly mathematical) shape.

There is a cool (as in ‘interesting’) light display art piece in the foyer – walk past at night. Not sure what its meant to be /represent (if anything). Still, catches your attention more than 99% of corporate foyer art.

Well that’s true laddie but DEEWR have plans to fill another building not yet built over near the Lakeside Hotel, which no doubt will coincide with end of lease of the remaining older accommodation. Just in time for another COG and a breakup into separate functions again no doubt.

Let’s not forget that this was intended to be the single home of all of DEST staff, when Senator Nick Minchin signed the contract mere days before the last caretaker period, irrespective of the possibility that MOG changes could render it unsuitable to serve as that purpose.

And what happened? DEST merged with DEWR and no hope the building could accommodate everyone. So the department will continue to lease multiple buildings around Civic.

But one good point: all the staff currently out at the airport will be moved in, leaving Snow Co with a bunch of empties, and a little less traffic out that way for everyone else.

Emjay Barker - 4 minutes ago
Daniel Duncan that’s a great idea 🤣 View
Daniel Duncan - 37 minutes ago
Stuff the test let them back with out any restrictions. View
Tracy Hancock - 9 hours ago
Nurse and midwife here. Have looked after patients who were Covid positive and didn’t know it when they saw me. I haven’t... View
News 33

Hot in the City: Kickstart your New Year’s health resolutions at this salad bar – it’s The Goods!