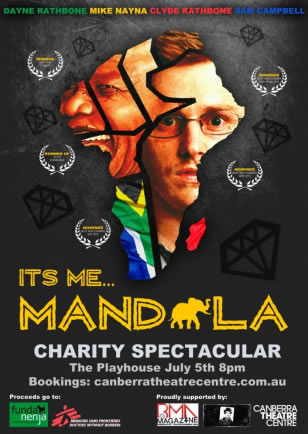 Since starting his comedy career in Canberra in 2010, hilariously-awkward South African emigrant Dayne has gone on to national and international success.

In 2012 he supported Anthony Jeselnik (USA) on his sold out Australian Tour, and 2013 saw him nominated for the Best Comedy award at the Melbourne International Comedy Festival, and Best Newcomer at the Sydney Comedy Festival.

Making his hotly anticipated acting debut is ACT Brumby (and former Wallaby) rugby player, Clyde Rathbone. The brothers spent the first 20 years of their lives in South Africa where they experienced the country’s revolution from an oppressive apartheid government to a democracy under the leadership of Nelson Mandela. ‘It’s Me Mandela’ brings their story, and South Africa’s, to the world.

Michelle Preston - 12 minutes ago
Property prices in Yass are over priced. View
Elyse Crawford - 39 minutes ago
Amanda Adams still the same cycle, those tenants would then be homeless. View
Ricky Gill - 4 hours ago
Beth Stevenson is that U? View
News 7

What Tristan K’Nell learnt from chatting to Canberra sporting champions

@The_RiotACT @The_RiotACT
Hot in the City: Al Manoosh is serving up a Lebanese breakfast spread in Mawson https://t.co/NbUW7gTjh2 (1 hour ago)