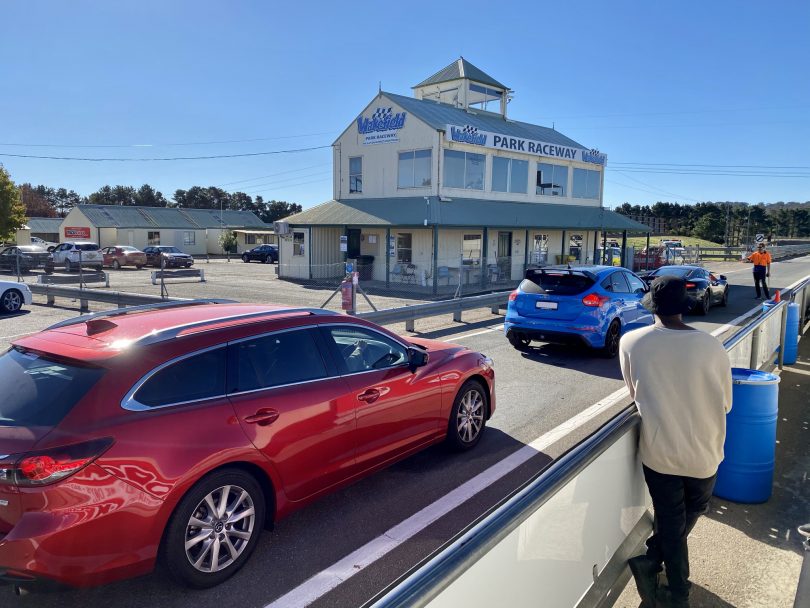 The people of Canberra have spoken.

According to a recent Region Media poll, nearly 70 per cent of Canberrans agree that local motorsport should receive a dedicated venue.

And now I can confirm two things: it’s in the works, and it will be hilariously good fun.

About 10 minutes from the centre of Goulburn is Wakefield Park Raceway, a 2.2km loop of tarmac where you can safely push your daily drive to the max.

The venue’s operations manager, Dean Chapman, says the owners of Wakefield Park Raceway, Benalla Auto Club (BAC), as well as Winton Motor Raceway, Australian Auto Sport Alliance (AASA) and Australian Motor Racing Series (AMRS) are “interested in investigating the option to assist and be a part of a motorsport facility in the Canberra region”.

“We, as a not-for-profit car club, have a vast amount of resources and experience in designing development consent for motorsport facilities,” he says. “We understand what it takes to make this viable.” 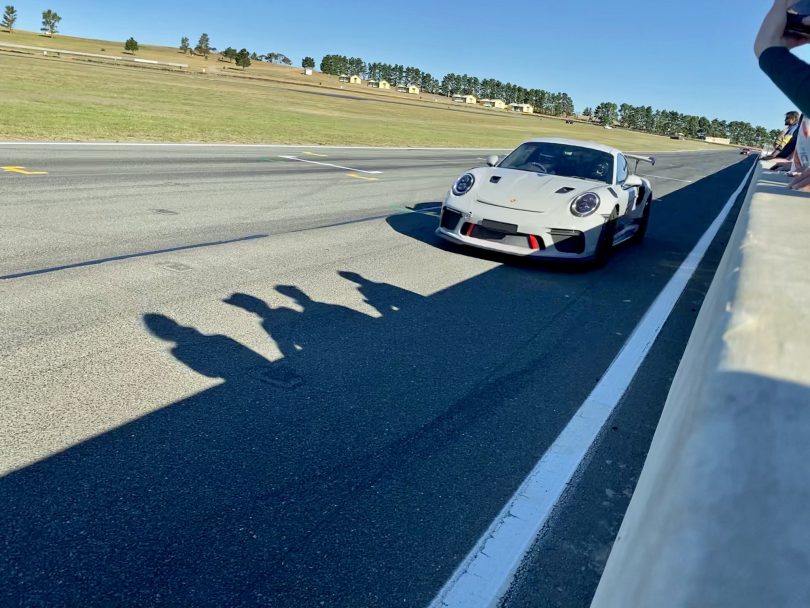 The ACT is currently home to a go-kart track, speedway, hill-climb circuit and driver-training circuit. The only thing we’re missing is a purpose-built race track, and Dean says the demand is definitely here.

“The revenue would be larger, and we would expect a lot of higher-level events at a Canberra-based motorsport facility,” he says.

On 26 April, I attended one of the regular track days overseen by Fifth Gear Motoring.

The track as it stands was opened in 1994 and is described as a “mixture of technical corners and relatively short straights” that make it ideal for testing “driving ability and car setup, rather than necessarily rewarding those with the most horsepower”.

This is excellent news for me in my bog-standard 2013 Mazda 6 wagon. But despite the fact I’m outgunned on all sides by Porsches, Lotuses, Nissan Skylines, BMWs, Audis, Fords and even a McLaren, everyone is extremely polite and enthusiastic.

We’re all here to talk engines, do laps and just have a grand old time. 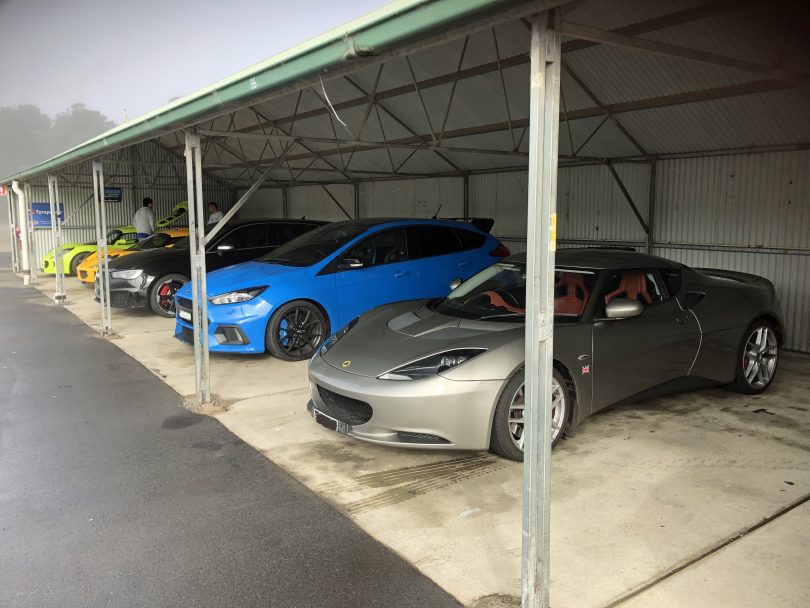 Some of the competition at Wakefield Park Raceway (not that it’s a competition). Photo: James Coleman.

OK, there’s a little more to it than that.

For starters, you’ll need a helmet, although Fifth Gear Motoring can provide you with one for the day. Long-sleeve clothing and closed footwear is also required.

A race track obviously isn’t a normal public road, and it comes with a few caveats. A standard driver’s licence carries no weight here, instead you must be issued with a race licence by Motorsport Australia. This can be purchased for the day onsite for $35.

No matter how comprehensive, your insurance policy won’t include motorsport activities so any mishap will be all on you. If your car is still covered by warranty, it’s also best to conceal the number plates as manufacturers have been known to void the warranty if it’s discovered your car has done track time.

The upside is that you are statistically safer on the track than you are on the road – and it’s a statistic you can feel. 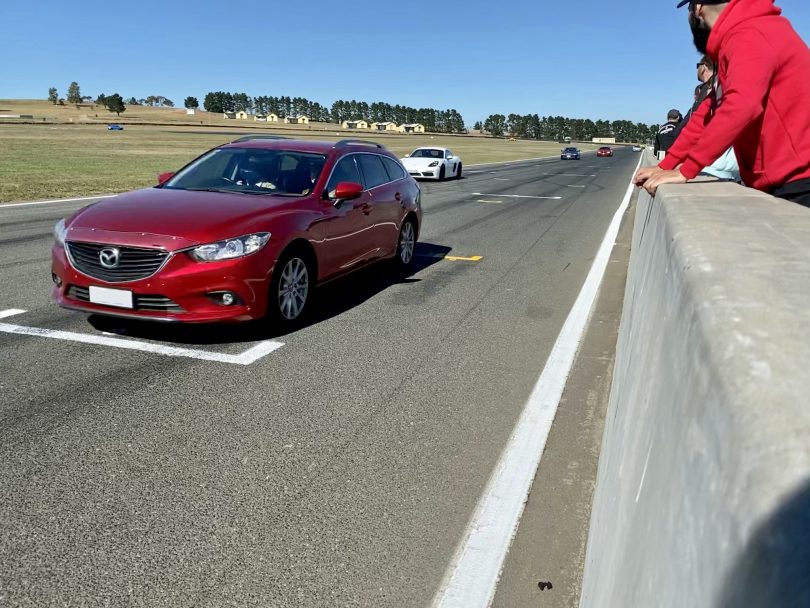 We’ll just gloss over the cars that are ahead of James (out of shot). Photo: James Coleman.

Yes, you might be clocking more than 140 km/h at times, and the tyres might be screaming in protest around every corner, but not only is the tarmac wide and the surrounding area completely devoid of street furniture, you’re also surrounded by people of the same mind as you.

No-one is wasting precious neurons on what was just said on the radio, or how the sausages ought to be cooked for dinner. Everyone is only thinking of how to drive the best they can.

Kim, a driver trainer with Fifth Gear Motoring, hops in with me for one of the sessions and directs me in perfecting my car control, racing lines and braking points. By the end of the day, this family wagon was flying.

A major criticism of having a motorsport venue such as Wakefield Park Raceway here in Canberra is that rather than getting hoons off suburban streets, it could only encourage them.

You leave the track with shocking helmet hair, glowing brakes and a lightly fizzing engine, but with a better understanding of your car and how to drive it.

You see normal roads with new eyes, ones that pick up on the narrowness and busyness and how quickly things can go wrong.

If Canberra gets a new track, we’ll all be happy and everybody wins.

Alternatively remove the speed limits on the Tuggeranong Parkway, all the roads around Russell on a Friday afternoon at 4 pm, and you’ll get the same thrills and spills

Under this lefty government people will soon be pushing it to maintain ownership and use of private ICE motor vehicles for day to day living.
The only way to get them interested in a motor racing venue in the ACT is for it to be an offset for all private cars being de-registered in the ACT.

Diane Clare - 2 hours ago
Lizzie Rose - we used to stop there for dinner on the way down to Broulee. Do you remember getting a lolly from the dolphin c... View
Community 3

MERC600 - 3 hours ago
Tis a sad thing. Have wandered in at various times over the last 30 odd years, and will miss the tav and Jenny and Gumby. Sti... View
John Coleman - 4 hours ago
Alicia Conley as long as your protest doesn’t delay my McNuggets order thanks View
Opinion 106

Dan Adams - 4 hours ago
Sign and share the petition to return the limits back to 60km. https://chng.it/chvTLkD8bc View
News 198

Dan Adams - 4 hours ago
Sign and share the petition to return the limits back to 60km. https://chng.it/chvTLkD8bc View
Community 23

bj_ACT - 4 hours ago
The Xpresso buses used to get people from Tuggeranong suburbs like Kambah and Wanniassa or Calwell and Richardson into Civic... View
News 24

There have been plenty of promises and a lot of money thrown around, but electric vehicle (EV) charging stations in...
Opinion 78

When I was growing up in an Indian-Muslim household, marriage was a foregone conclusion for my future. Of course I...
Best of Canberra 155

We all love our dogs, right? And we want them to look their best. But with a busy schedule, sometimes...
Opinion 25

@The_RiotACT @The_RiotACT
When it comes to collecting, we reckon there are few wiser than Canberra's Angela Plant. After all, she collects owls - a group of which is called a Parliament - such is their perceived cleverness (or the name's ironic) https://t.co/Bv0XLJgpNL (59 minutes ago)

@The_RiotACT @The_RiotACT
The winners have been announced for a Father's Day scarecrow competition, with more than 600 votes cast on 51 colourful and creative entries. Take a browse through some of the entries https://t.co/BSQd7MWk8A (2 hours ago)