It’s the gym, Jim, but not as we know it 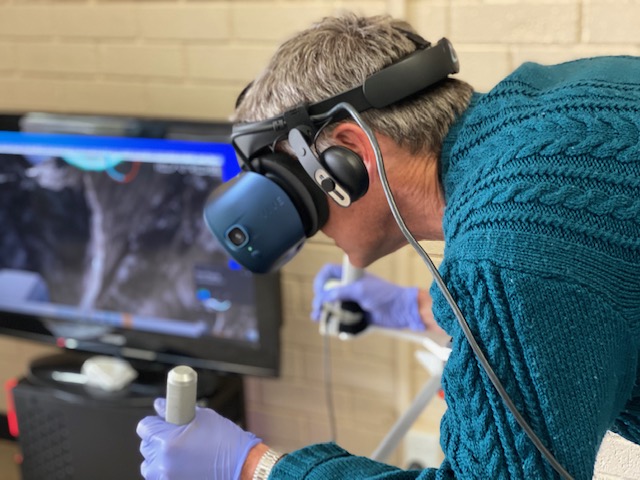 Trevor Vickers is talking me through the latest piece of high-tech gear to arrive at the headquarters of his Jet Flight Simulator Canberra adventure experience.

“It’s made in Germany, and it looks like it … so elegant and well put together,” he says as we inspect what looks to me less European design exemplar than medieval torture device recalibrated for the 21st century.

With its thin white frame featuring arm and leg rests supported by a semi-circular base and stark black stand, ICAROS is a most unusual contraption.

But what else would you expect of a flying virtual reality machine?

Billed by its European inventors as “fusing health-science and gaming technology to enhance body and mind performance”, Trevor says his ICAROS is the only one in Australia available for public use (well the only one of two, if you count its identical twin sitting right beside it in this compact Lyneham studio). 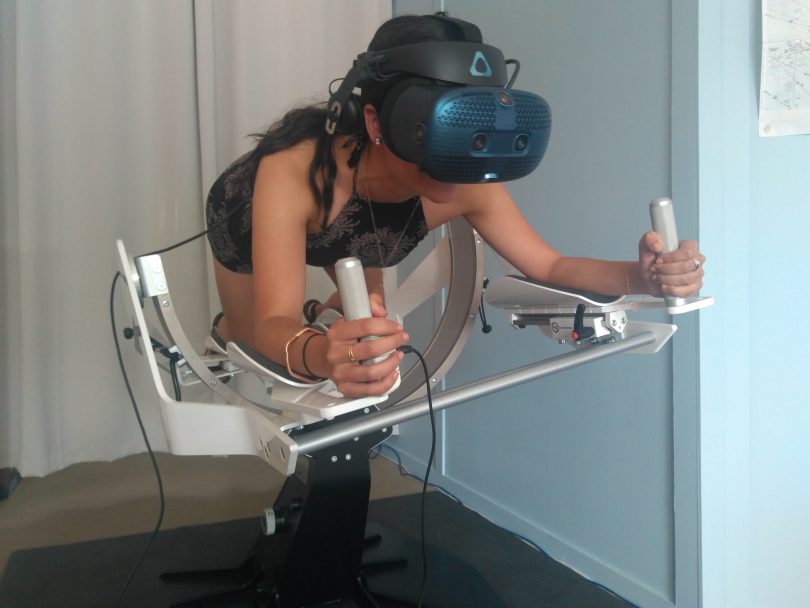 Originally designed to make fitness more fun by combining exercise with virtual reality, the system is now used in gyms, rehab facilities, hotels and entertainment venues across the globe.

It was the flying aspect that piqued Trevor’s interest. With increasing numbers of group bookings for his jet flight simulator experience, he was keen to add something new to the repertoire to keep people entertained while their friends were in the ‘cockpit’.

ICAROS more than met the brief. By climbing on to the frame, donning a VR headset and using their bodyweight to tilt backwards and forwards and side to side, users feel as if they’re soaring sky high through various otherworldly scenarios.

As one of perhaps few people who has managed to fall off a Pilates machine due to a combination of inattention and ineptitude, it’s with trepidation that I slide my right foot on to the ICAROS, then my left, before leaning forward into the armrests and grabbing a pair of handlebars.

With Trevor’s calm encouragement I tilt the frame to the left then to the right, before impressing myself with an energetic plunge forward rendering me almost upside down.

Trevor bursts my bubble by informing me I’m only just horizontal. And we haven’t got the goggles on yet.

Once the VR headset is on, things take on a whole new dimension. I’m flying high above the snowy peaks of an unknown land as a series of rings come at me from all angles. The aim, Trevor says, is to use my hips to move the frame and guide myself through the rings, scoring points in the process.

What with trying to keep myself from falling off (Trevor assures me this has never happened), steering towards the rings and checking out the scenery, I don’t even know where my hips are any more.

The more I try to target the rings, the more they elude me. It’s a Eurovision-style ‘nil-pwa’ for me and I give up the challenge in preference for a quick scenic flight around the mountain tops before my session ends.

“People do find it a bit of a workout at the beginning,” Trevor says, and it’s no surprise.

During my short practice run it’s become clear why ICAROS has been so successful in gyms and rehab centres – you’re essentially planking while using muscles you didn’t know you had to glide through an alternate universe.

“A full-length game lasts three minutes, which sounds terribly short but feels terribly long,” Trevor adds. “It works best if you come in a group or a pair when you can sit down for a time between games. You can get exhausted if it’s your first time. There can be a bit of nervous tension as it’s so exciting.”

My Fledgling Flight including instructed warm-up and two full-length games, is $30. Those with more stamina (and perhaps a mate to share the load) can book a 30-minute Falcon Flight which involves a range of agility, battle and exploration games ($60). Other timeslots and combinations, including bookending ICAROS with the Jet Flight Simulator experience, are also available.

In addition to the ICAROS hoop challenge, you can race through tunnels and paths, dive deep underwater or take part in live races with other ICAROS pilots around the world (if you’re well beyond novice stage). There’s also a full-on alien attack if that’s your cup of tea.

“Your job is to save the world by shooting down the drones and the alien scout ship,” says Trevor of the latter. “That one’s the most fun but also the most difficult – it needs a lot of precision.”

No words need to be exchanged between me and Trevor to know that I’ll not be conquering any aliens today. But I’m intrigued, and the sensation of flight is certainly exhilarating. With a little more practice (and perhaps another decade in the gym) I could become quite addicted to this.

To use ICAROS you must be a minimum of 150 cm tall and weigh no more than 110 kg. For information and pricing, visit Jet Flight Simulator Canberra.

Bob Fraser - 30 minutes ago
Good on you Debbie, some sound advice at last amongst a lot of cringe-worthy comments. View
Geeta Datta - 1 hour ago
Kieran Angus Maybe, it's an EEG I'm thinking of. It's amazing how little they tell you about yourself lol. View
Julie Macklin - 2 hours ago
Nora PrestonPlease give the source of that graph. Without a source it’s worthless. View
News 40

Carly Maree - 40 minutes ago
I wonder if the people doing this use computers or phones? SMH. 🤦🏼‍♀️ View
Matthew Davies - 58 minutes ago
Yvon Nemchinov sounds like you should talk to someone who has to watch people die of COVID who could have been saved. Freedom... View
Yvon Nemchinov - 1 hour ago
You should move to North Korea. Sound like you would love it there. I grew up in a place where people were prosecuted for tho... View
Opinion 1

Nick Swain - 1 hour ago
As well as potentially great public art the major attraction of this area to be maximised is its heritage. The ACT Heritage C... View
Opinion 5

John Moulis - 1 hour ago
The Australian basketball team in the 1972 Munich Olympics. I vaguely remember that game. Australia was playing the US dream... View
Jennifer Andrew - 2 hours ago
A lovely person always and a great contributor to sport in Canberra. View
Fiona McLean - 2 hours ago
Wait? Phil's hair was dark? Well I never… View
Opinion 220

Commuters have been warned to prepare for years of disruption on the southern gateway to the city as work ramps...
Opinion 220

Health Minister Rachel Stephen-Smith has told people travelling to the ACT for parliament to "keep yourself to yourself as much...
News 40

Stickers with QR codes that link users to non-COVID-related websites have been placed over some legitimate QR code check-ins in...
Community 39

School’s back but not as we know it

Can we fix it? Yes we can! Why a right to repair matters

@The_RiotACT @The_RiotACT
The historic St John's Orphanage in #Goulburn has been ordered to be torn down within 90 days https://t.co/2MpopcNQHt (59 minutes ago)

@The_RiotACT @The_RiotACT
The old Capitol Theatre in Manuka will soon be coming down to make way for a new hotel and cinema complex after the project's second stage was approved https://t.co/hIOHgAvfi1 (2 hours ago)

@The_RiotACT @The_RiotACT
The Kingston Arts Precinct project needs a kick start to re-engage a community being kept in the dark, says Ian Bushnell https://t.co/2ltMgI3NWV (5 hours ago)