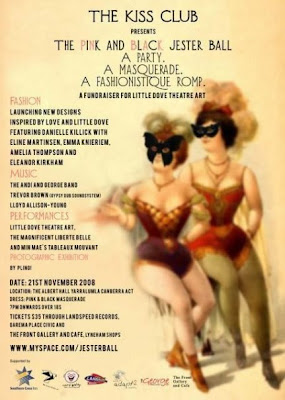 Last May’s Jester Ball put on by Tom Woodward was a raging success with a good time had by all.

A new mob have now taken up the torch and are trying to move the concept on.

So if dressing up and freaking out at the Albert Hall appeals to you then get down to Landspeed Records in Garema Place for a ticket.

More details on their Myspace page which lists the ball as an 101 year old woman and says of the event:

“Send in the clowns, drown in the wine, sway with the glamour, and dance with me til the end of love. The Kiss Club invites you to its 2008 Masquerade Ball. To be held at the Albert Hall on the 21st of November the Pink & Black Jester Ball is set to be the biggest night of 2008. We begin with the haunting murmur of Llyod Allison-Young’s keys of fire and brimstone, then funk it up to the sounds of Sydney DJ Trevor Brown of Gypsy Dub Soundsystem. Splashes of burlesque from the Magnificent Liberte Belle will delight, as will the bodies that move among you from Min Mae’s Tableaux Mouvant. But the real kicker is this: 5 local designers have created all new lines inspired by Love and Little Dove Theatre Art in Pink & Black. This is a parade not to be missed! Then swirl your bosom as you dance the night away to the always soulful and funkadelique Andi & George Band.”

UPDATED: We’re pleased to announce we have a double pass to give away to a lucky premium subscriber. Send in your desire to be in the draw by 5pm 14 November.

If you’re not already a premium subscriber there’s nothing to stop you signing up and then going in this draw.

ANOTHER UPDATE: Congratulations to bloodnut, who’s number has come up. More exciting give-aways coming up for premium subscribers so don’t be left behind next time, sign up now!

Yes, congratulations bloodnut! Get well soon and have a wonderful time!!

Hooray for me. now to shake this flu before friday.

But then she’d be a skanky whore who spread her legs to have sex with a man!

If only one of them was pregnant;o

I like the poster cos the ladies are curvaceous and rounded. Bring it on, I say! More of the same.

Not sure if I should own up to this Granny but, I liked it for the same reason.

I like the poster cos the ladies are curvaceous and rounded. Bring it on, I say! More of the same.

I’d ask them for you, but I’d have to join Myspace.

Mirjam Herzog - 6 hours ago
Chris Cross' pro argument citing the rates income from diplomatic missions is a highly contentious issue as the concept seems... View
Julia Ross - 15 hours ago
If it gets developed by the usual developers in Canberra, it will be a soul-less concrete wasteland like Gungahlin which will... View
Mark Valerius - 15 hours ago
A great idea for space that’s used for sweet FA. View
News 7

Conrado Pengilley - 14 hours ago
The Chi-Na virus will be contained. View
News 61

Ekaterina Smirnova - 20 hours ago
What could possibly go wrong? View
Christopher Miles Y Lopez - 20 hours ago
The ACT is under the throes of a neo liberal pseudo scientific dictatorship right now. I'm sure that the space that will be m... View
Peter Marshall - 24 hours ago
If the magistrates and judges stop sending new people into prison, or expecting remandees to turn up to court, and if no-one... View
News 3

dcollins - 24 hours ago
I don't see a problem. I don't think maintaining paddocks for the private use of a few horse owners is a priority. Different... View
Julia Ross - 1 day ago
How many flippin' embassies does Canberra need? Why do they all have to be on prime land? What about using the land to build... View
jof50 - 1 day ago
The myopic and shouty Guardians of the Lake are stuck in a time warp. They want to put a glass bowl over central Canberra and... View
News 236

@The_RiotACT @The_RiotACT
Can't find a park at Cooleman Court? A proposed temporary car park opposite the centre in Weston has been almost halved in size and new traffic arrangements devised after community feedback about the project. https://t.co/g1vXahJaHD (1 hour ago)

@The_RiotACT @The_RiotACT
The coronavirus public health emergency has forced the ACT Government to call off Canberra's premier tourism event, Floriade, despite it being not being held for another six months https://t.co/0PJI2cDakg (2 hours ago)

@The_RiotACT @The_RiotACT
It's time to learn to love Bruce Stadium because it will be here for a while, writes @TimGavel https://t.co/WFGqPdDsZX (4 hours ago)