Jets and Vapour streams over Canberra

So, has it just been me noticing all the Jets flying over Canberra today?? (Sunday) I have watched more planes flying over head all very close together today then I think have ever flown over Canberra before (ok slight over statement…but you get the idea…), Anyone know if there was any military ops going on as im sure there cant be that many people flying to and from Sydney and melb!!

[Ed] I took some photos of what was left:
Only possibilities I came up with was RMC or ADFA graduation but RMC is probably not until Tuesday. 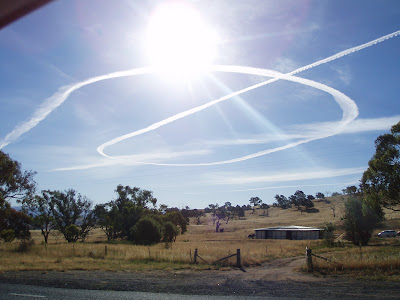 I’ve been enjoying the contrails too. I love how they start out so sharp. Thanks for the info.

Norway has something beter then we do in the skys…. take a look. It might be Rudds new plane, Canberra to Norway in 2 seconds

If anyone gets photos, feel free to send them in

and since when does ADFA have graduation on a Thursday?

An F-111 flypast will occur tomorrow for the ADFA Graduation –

WHAT: Flypast by an F-111 strike aircraft during the Australian Defence Force Academy (ADFA) Graduation Parade.

Background:
An F-111 strike aircraft from Number 6 Squadron, will fly over the Australian Defence Force Academy on Thursday, 10 December 2009, as young graduating officers from Navy, Army and Air Force participate in their final Academy parade before continuing on the next stage of their military careers.

The aircraft will approach ADFA from the east at a height of 500 feet, and will pass over the Graduation Parade at 10:20am, local time.

F-111s will be retired from the Royal Australian Air Force in December 2010 when their replacement – the F/A-18F Super Hornet – becomes operational.”

Watch out for the chemtrails!

On sunday evening I counted 9 vapour trails overhead, 3 in the process of being made.

The planes are actually spraying Mortein.

…oh, I forgot to mention – one photo shows 6 aircraft – with an additional one out of the frame to the left… that was about 630pm, Sunday… the “holding pattern” is breaking up in the right of the frame… (from a driveway in Kambah). The sunset ones were taken closer to 8pm in Dunlop on the way home…

Sunday’s significant amount of air traffic, particularly heading to Melbourne… I suspect that most were returning to Melbourne with the hundreds (thousands?) of people who went up to Sydney for the V8 Supercar event… I suspect additional flights to what is usual… that – and an interesting/unusual atmospheric weather…

Another thing that occurred to me today is that these trails might be from Airbus A330 aircraft, as they seem to have a very bad habit of going off and doing their own thing when the pitot tubes and flight control computers malfunction.

The Reptilian reinforcements are coming!

Pilots getting ready for Summernats…

The only time I’ve ever been served a hot drink in scum-class on a jet between Sydney and Canberra was during a triangular holding pattern over Lake Burragorang due to fog in Sydney, which persisted until we were forced to return to Canberra (fuel).

why would a plane do two u turns?

Ummm… strategies to delay arrival time for public transport coming into a busy terminus such as pulling off onto the verge and leaving it idling for 15 minutes don’t tend to work so well with aircraft!?!?

The vapour steams were also noticable over southern Canberra this morning about 9am. Could be a coincidence but ADFA’s graduation is today.

Any planes they fly for the graduation (don’t think they will) won’t be high enough to leave contrails. Contrails don’t normally appear until a plane is pretty high up, and by that stage the contrails are usually the only sign that a plane is infact there.

No, no, no. It’s a sign for the invading alien fleet. Land here, where you see the paperclip symbol.

I bet if you checked globally, these trails will be near every major city. Coincidence?? I think not!

The vapour steams were also noticable over southern Canberra this morning about 9am. Could be a coincidence but ADFA’s graduation is today.

I wish – the lake would be a perfect setting for red bull in Canberra!

Hmm, the science (or lack of it??) is over my head, this bit is the only bit I know is correct:

“Not yet, they would still be talking with Melbourne centre. Infact I do believe Sydney approach doesn’t take over until the plane is virtually landing, also with exception to the tower at Canberra airport itself, all of Canberra’s airspace (including Canberra approach) is controlled out of Melbourne centre.”

Holding patterns should be loop-the-loops. That would be awesome.

Hmm, the Liberal Party is taken over by climate change deniers, ETS is defeated in the Senate, global leaders are about to start talks on climate change and all of a sudden there is a massive increase in chemtrails linked to global dimming – co-incidence? Probably.

explan this if these are normal flights?
why are there no trails being left today?

Julie Macklin - 2 hours ago
Fortunately the long grass looks prettily scenic, until they do get to mow it. View
Tom McDonald - 2 hours ago
Correct. Same complaints year after year. View
Nathan Horton - 3 hours ago
Julie Macklin they have known for 3 months it is going to be a wet spring and summer. Yet chose not to be proactive and prepa... View
Community 4

ssek - 11 hours ago
Give it time and the greens will have all kinds of legislation around halloween to prevent children having fun. View
News 1

ssek - 11 hours ago
These marine parks are ridiculous. Stopping a few people with a rod and fishing line from catching a couple of fish does not... View
Opinion 5

Capital Retro - 12 hours ago
I don't agree with a few of your claims. I am a senior person and at no time in my life have I ever heard of house ownership... View
Motoring 10

oh_ - 12 hours ago
As much as the noise, disruption and burnout smoke is trying for nearby residents, it does bring money and something differen... View
Rob Thomas - 22 hours ago
Floriade? View
Tim White - 23 hours ago
David Perkins you do know that it created jobs and brought millions into our local economy and in some cases kept many small... View
News 7

Chris Hobbs - 14 hours ago
Will ACT residents benefit from 30% canopy cover by 2045 from a massive tree investment, yes! Will we need to remove some old... View
Alice Paris - 14 hours ago
I dont think you understand what is happening here Chris. The Greens and Labor are responsible for the removal of so many mat... View
Bill Gemmell - 15 hours ago
Alice Paris I think people need to talk to their MLAs and let them know how the feel about various issues. I certainly will b... View
Food & Wine 32

@The_RiotACT @The_RiotACT
The election's over and it's time for some fun. Our poll this week asks if we should celebrate Halloween or if it's commercialised nonsense https://t.co/JvbB9hOhZp (2 hours ago)

@The_RiotACT @The_RiotACT
There's plenty happening in Canberra over the coming week. Here are ten great things to do in the next seven days https://t.co/u9dwGfwghO (3 hours ago)