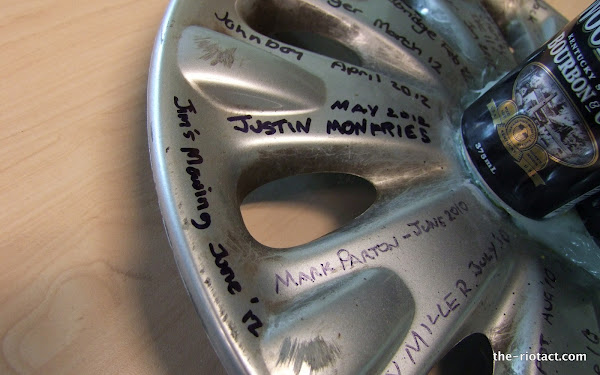 Coming into last week we thought Danny Subasic had the Mully Cup in a lock despite stiff competition from Kaon Bell (you see what I did there?).

And then Jim’s Mowing burst onto the scene and national news headlines. It had the classic cars v. cyclist elements BUT with breathtaking video.

It proved an irresistible combination despite a late charge from the Klansmen of Gungahlin.

So congratulations to Jim’s Mowing taken out a hard fought Mully Cup for June by a comfortable margin.

For those who’ve forgotten here’s Canberra’s most prestigious trophy, taken from a rear view to highlight the rat’s tail.

(The Mully Cup is awarded monthly to the entity stimulating the most comment on this website It is named in memory (if not in honour) of Justin Mully Williams who both improved our world, and set the record for comments, in his departure) 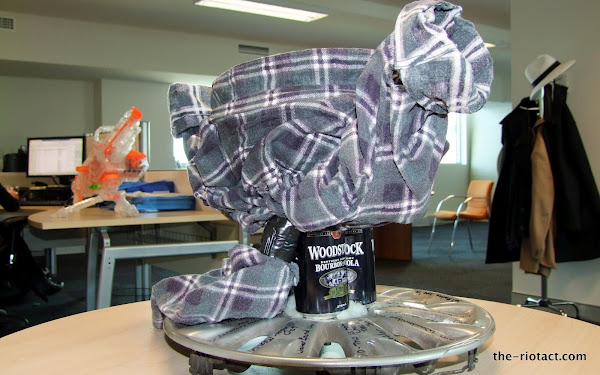 I heard that one too. I think the custom is to add/build up the existing base of trophy, particularly those of a perpetual nature. How about you glue that sucker to the table?

Why is the current cup now held together by a huge wad of what appears to be snot, or sperm?

My first reaction to this post was a huge WTF? However, closer examination of the pic in the OP does indeed reveal a rather over exuberant application of either Selleys Aquadhere, or semen, in affixing the Woody can to the base.

I sincerely hope it’s the former.

Why is the current cup now held together by a huge wad of what appears to be snot, or sperm?

Chuck a giant owl on it!

Should there not be a Mully Cup handicap for mentioning cyclists?

I think dpm was referring to the part of the article that says “…Mully Cup for *July* by a comfortable margin.” (emphasis mine)

Is that some sort of Nerf Heavy Weapon in the background?

squad weapons are where it’s at.

That’s a quality looking nerf gun in the background JB…:)

Well done everyone. A classy performance by all, if only somehow we could have got climate change and religion into the same story we’d get some sort of Mully Armageddon.

cue monthly comment from someone complaining about honouring the cups namesake… how many posts will it take?

Jack Reid - 3 minutes ago
Rob Chalmers sure, that's a different conversation which I'm happy to have but old Georgie boy here was getting very angry ov... View
Michael Cruckshank - 34 minutes ago
Radiation causes cancer. Wireless devices cause radiation. View
Matt Gard - 2 hours ago
Send them a note. "It's wired to the node." View
Opinion 17

Natalie Grey - 16 minutes ago
Jill Lyall "what's wrong with socialism?" Try asking the citizens of Venezuela! View
Jill Lyall - 4 hours ago
Henry Kivimaki what’s wrong with socialism? It’s a better use of our taxes than building war machines and subsidising min... View
Marie Ryan - 10 hours ago
Bob Cheney Why would we want to get rid of the current govt when they've achieved a city that runs on renewable power and has... View
News 27

Gerry Satrapa - 2 hours ago
Peter Robinson “starting to pop up around the place”... like; where, exactly? View
Andrew Nelson - 12 hours ago
I see Julia bullship is working her magic View
News 177

JC - 11 hours ago
Opportunity cost works both ways. Think of the enormous costs that have otherwise been saved by not having to add extra road... View
John Kerry Tozer - 12 hours ago
Daniel Bryan - Be REALLY good if they told us how they are going to get across the lake! View
Sharvi Tinnlonga - 15 hours ago
I agree that the rail should go to Kingston, and then on to the airport if a suitable route could be found. I think the airpo... View
News 3

Robyn Holder - 11 hours ago
Bill Pappas if they were funded properly by govt they wouldn't have to rely on fees to run the uni. View
Lifestyle 6

Jose Vega - 15 hours ago
Waste of money the federal government has already written the conclusions and recommendations and is now spending my tax paye... View
Eric Anthony Lucas - 21 hours ago
Susie Edmonds on the contrary, it makes sense not to spend a fortune on enquiring into something the IPCC has already covered... View
News 6

Jeff Smith - 19 hours ago
I don't know whether the gang laws will work or not. But to claim this work 'as an Independent report' is far fetched. The au... View
show more show less
*Results are based on activity within last 7 days

One of the biggest events on the Canberra calendar arrives this weekend. The National Multicultural Festival will turn the CBD...
News 84

The 1.7 kilometre extension of light rail from Alinga Street to Commonwealth Park via London Circuit will be wire-free, in...
News 84

Opposition leader Alistair Coe has asked Canberrans to have higher expectations ahead of this year’s election following the Government’s budget...
Opinion 68

The first stage of the proposed new cemetery in Canberra's south will have 2500 burial plots in a lawn and...
Opinion 17