Once a truck stop on the Hume Highway, Jugiong is now a popular tourist destination best known for its striking poplars, which are being removed. Photo: Supplied.

Future visitors to Jugiong, 61km west of Yass, will no longer receive a tall, chartreuse standing ovation but instead be lured into the town by the bright red fingers of leaves of autumnally visual lipstick maple trees.

The town is currently trying to cover its winter nakedness, with work beginning last month to denude its main street, Riverside Drive, of the characteristic avenue of poplars which were deemed dangerous by Hilltops Council.

It’s a familiar refrain and a warning for any country town with majestic sentinel guarding entranceways – as reverberated lately in Braidwood where it also faces the loss of poplar trees.

“The existing poplars have been assessed to be at the end of their life and are at risk of falling in storms and causing safety issues,” says Hilltops Council. “These trees are also not compatible with being close to the existing power lines.”

Locals place the age of the Jugiong poplars at around 70.

For many people who have passed through the area, they are as synonymous with the former Hume Highway truck-stop town as the famed The Sir George hotel and, in pre-bypass days, as a hiding spot for police waiting to catch speeding motorists. 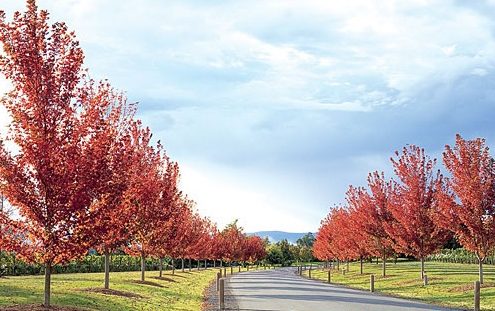 For the population of 222 who reside in Jugiong, some of who either embrace or grapple with the town’s escalating popularity, the removal of the trees offers immense benefits.

A masterplan for the town was developed following a public meeting in March 2018 where local stakeholders voiced concerns about the problems with pedestrians and parking in the area as businesses flourished.

Consultation between Hilltops Council and the community resulted in the masterplan finally being adopted by council in March 2019.

It is in the very capable hands of one of the South West Slopes’ foremost landscape architectural firms, Somewhere Landscape Architects – led by Alex Dalglish of Young – who designed the Gift of Life Garden at the National Arboretum Canberra.

According to Hilltops Council, the lipstick maple tree has been selected to enhance existing lipstick maples already planted in Jugiong, and it is consistent with the planting guide in the Jugiong Masterplan.

Council will remove the remaining poplars between now and September 2020.

Each tree will be assessed by a tree removal crew, but according to council it is likely the teams will use standard arborist techniques, including the use of chainsaws and may include elevated work platforms or climbing to safely remove the trees.

Where the trees are close to infrastructure – such as power lines or roads – the removal technique will take this into account to ensure they are removed safely.

In line with the removal of the poplars comes the next phase of Jugiong’s street beautification works. This will include upgrading drainage near the intersection of Jugiong Road and Riverside Drive; upgrading of speed traffic signs and garden entrance treatments at the entrances to Jugiong Village; formalising car parking with line marking in the village; and sealing the shoulders on Riverside Drive.

Roadworks around the drainage improvements near the intersection of Jugiong Road and Riverside Drive will be completed by the middle of June.

In a move to honour the heritage of the village, a new street will be named Parry Street. Sargeant Edmund Parry was a colonial policeman murdered by Ben Hall’s gang of bushrangers in 1864. The street naming is a nod to the town’s heroes of the past and celebrates the rich history of the village.

Ho hum, what else is new? More trees given the chop. If council is so worried about the trees falling, then they should be reviewing the thousands of trees which grow close to our roadsides, before they fall onto passing cars or before they get "too old". Hopefully someone who is a landscape artist will capture the beauty of these majestic trees in a painting, to be hung in a public place.

The Poplars are fell'd, farewell to the shade

And the whispering sound of the cool colonnade.

The winds play no longer, nor sing in the leaves,

Nor Ouse on his bosom their image receives.

Twelve years have elapsed since I last took a view

Of my favourite field and the bank where they grew.

And now in the grass behold they are laid,

And the tree is my seat that once lent me a shade.

The blackbird has fled to another retreat

Where the hazels afford him a screen from the heat.

And the scene where his melody charmed me before

Resounds with his sweet-flowing ditty no more.

'Tis a sight to engage me, if anything can, to muse on the perishing pleasures of man;

Though our life be a dream, our enjoyments, I see, have a being less durable even than me."

Angela Moore thank you for this beautiful poem.

Donna Venables - 24 minutes ago
Let them use Zoom. They can find out for themselves how bad the Aussie internet really is. Maybe then, there will be somethin... View
Avril Pounds - 3 hours ago
Keep all Victorian MP's out of the ACT. Not worth the risk. Parliament can operate via zoom.... View
Community 23

O L - 2 hours ago
Went through Cooma last week and thought I’d get a covid test, no way as the covid testing was closed an hour for lunch???? View
Sport 15

Canberrans with valid travel permits have been stranded at the Victorian border after NSW authorities changed their access requirements at...
News 9

From paddocks to Poplars, the Jerrabomberra vision is being realised

Platypus and poplars make this the perfect rural retreat

@The_RiotACT @The_RiotACT
The peafowl have been a feature of Narrabundah for 30 years, and now they have their own street sign to help keep them safe https://t.co/y4cynU4Vbs (1 hour ago)

@The_RiotACT @The_RiotACT
The Bushfire Royal Commission has heard that Australia's ability to fight bushfires could be hampered due to dependence on one US supplier of fire retardant, a situation recently highlighted by COVID-19 manufacturing shutdowns and delays https://t.co/0l2YEOtvoU (3 hours ago)