Julia trapped by an angry mob at the Tent Embassy?

We’re hearing there have been ugly scenes at the tent embassy with the Prime Minister needing to be rescued by police.

If you were there please tell us all about it in the comments or mail pictures through to images@the-riotact.com .

Here’s Nine’s take on it: 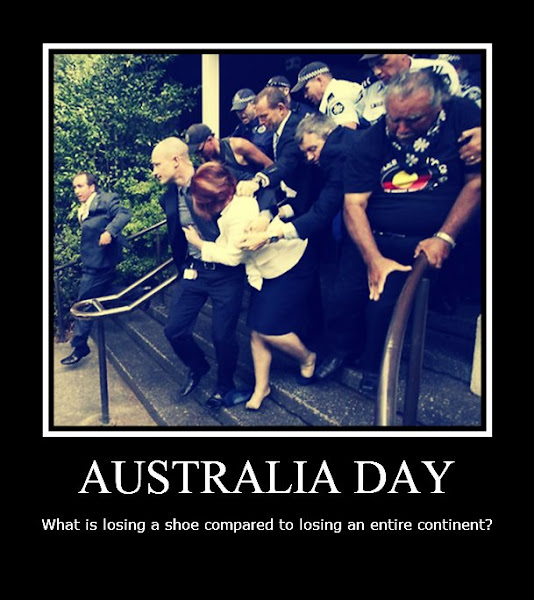 341 Responses to Julia trapped by an angry mob at the Tent Embassy?
Filter
Showing only Website comments

Taken it to the gunman. Good show.

That pathetic example of pandering called “The Tent Embassy” must go. This is the final straw. what a disgrace.

Any chance we could put the details up for the non-twitterers?

Well, I have stood up for the Tent Embassy for a long time, but if this is true and if its members did indeed launch an attack on our Prime Minister and Opposition Leader, I have little to say other than it’s time is clearly up.

The Tent Embassy was meant to be a way for our indigenous citizens to promote their people and their place in Australia. When they fail to achieve this because they choose to promote violence against our political leaders, they can longer stand by their original mission.

Jethro …are you sure you have stood up for the Tent Embassy. You seem to have a deluded opinion of what they are about.

That pathetic example of pandering called “The Tent Embassy” must go. This is the final straw. what a disgrace.

+1 What an absolute disgrace! There is no excuse for violence – just a further example of why it’s time to shut them down. Demanding the Oz Govt sign a treat of Sovereignty granting ownership of Australian land to the Aboriginal people – what a joke… I hope no one was injured; and hats off to the Police that had to deal with this scum.

A bloody disgrace. I had some sympathy for the tent embassy, but no more. Bulldoze it.

The video footage shows the Prime ministers cars driving back through the protest. Smart move……….

This is a tragedy.

How could anybody involved have possibly thought it would be a good idea. “I know…lets have a bit of a riot and attack both the PM and the opposition leader, thus garnering sympathy from both sides of poitics!”. If a bunch of white supremacists had tried to come up with a way to generate hostility towards indigenous people, this would be at the top of the list.

All Australians have a right to peaceful protest, but what happened here was well out of order. The PM was obviously frightened and humiliated. Nobody in public life (or any life really) should feel threatened as they go about their business.

I never thought I’d say this, but Ms Gillard and Mr Abbott both have my sympathy.

Disgraceful and unacceptable.
They have set their cause back 20 years.
Why have no arrests been made?

when you read Abbott’s comments in context, there is nothing in there at all to trigger this kind of thing. What a disgrace to the protestors.

Having such a meeting within a few metres of the tent embassy at the best of times is a dumb move. Dad’s Army obviously over-reacted and at least one suited CPP person from the army was more intent on not spoiling his suit. But he’s well known for not being much good for anything but telling lame jokes. Good onya BD.

Re #1 simsim – I heard Tony Abbott speaking and I do not recall hearing him say – “…statements that the Tent Embassy needs to be moved…”.
I thought I heard him use the expression “time to move on” – a different thing.

Any chance we could put the details up for the non-twitterers?

If you follow the link you can see it, you don’t need an account, but there are more and better pics at the SMH here http://www.smh.com.au/national/pm—dragged-away-after-being-trapped-by–protesters-20120126-1qj1c.html

How to make friends and influence people.

But that’s okay, idiot hangers-on will continue to set back any real reconcilliation by years.

Jethro …are you sure you have stood up for the Tent Embassy. You seem to have a deluded opinion of what they are about.

What they are “about” is rent-seeking and black exceptionalism, particularly from the rule of law.

The government’s policy towards issues of race should be one of benign neglect. Indigenous Australians should be subject to the same rules and laws as the rest of us and should receive neither preferential nor prejudicial treatment on racial grounds.

Heather Stroud - 34 minutes ago
I wonder when the birds will figure out the drone has food!!! View
Wendy Young - 4 hours ago
Birds are much more important than delivery drones. So. Much. More View
Brittany Pryor - 5 hours ago
Michaela Gillard this is the drone delivery I was telling you about! View
Opinion 16

Tramcar Trev - 35 minutes ago
Would not get too excited about this. If you look at the draft plan the area is all high-rise from 2025 with not a railway in... View
Ted Hennicke - 2 hours ago
I know there are state border issues at play, but I've never understood why Canberra isn't the terminus for the Southern High... View
Property 6

Jonno Bazza - 1 hour ago
And getting rid of those feral Myna birds would help a lot too. View
Property 23

Angus Pharker - 1 hour ago
These NIMBY groups are ridiculous. They’re so predictable and hysteric that every single one is an hilarious parody of them... View
News 158

Paul Mathews - 2 hours ago
and I thought all this time they deterred BARKING DOGS, eh Chris? View
News 9

jwinston - 4 hours ago
To kickstart the economy again, create more jobs and clear the roads of most of the trucks the federal government should get... View
show more show less
*Results are based on activity within last 7 days

@The_RiotACT @The_RiotACT
ACT public schools' approach to students with disabilities is again under scrutiny with a new Government-commissioned review underway https://t.co/TQRPEbJwvK (53 minutes ago)

@The_RiotACT @The_RiotACT
Shopping centres all across Canberra, including Cooleman Court, Belconnen, Wanniassa, Kambah, Conder and the Canberra Centre have been listed as COVID-19 exposure locations by ACT Health https://t.co/pEyEmdLMwr (1 hour ago)

@The_RiotACT @The_RiotACT
Sole traders who jumped on to the ACT Government's COVID-19 Disaster Payment at the start of lockdown may now be better off receiving the Business Support Grant https://t.co/1x2jlhxS0o (2 hours ago)