Just what are the Ukranians angry about? 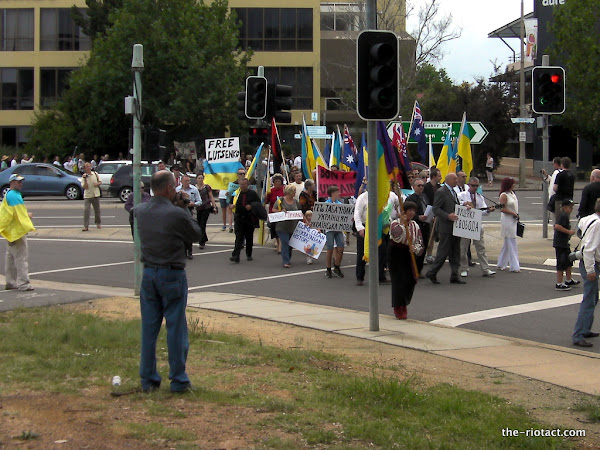 Well done to our Ukranian friends, you can stop traffic in Canberra.

9 Responses to Just what are the Ukranians angry about?
Filter
Showing only Website comments

Hello – for those who were wondering what the Ukrainians have been protesting about lately (as of Feb 28 2011), the following tweets I have provided give some insight:

There is a protest in Kiev #Ukraine today against draft law No. 7468-1 “On education” http://bit.ly/gncWLV #ua #ukraine2 #kat_ua

All twitter tweets shown above are copied or partially copied from tweets that I posted today, Feb 28 2011 – my twitter ID is pcvcolin
A footnote: Much organizing seems to have built naturally from tax code protests in the Ukraine which were very strong and active near the end of 2010 and which are still a matter of discussion on hashtag #kat_ua and on Russian and Ukrainian language blogs.

this coould help people. This official media alert as to why WE demonstrated on the weekend.
May i point out, it was not towards the people of Russia, rather the government and regime in the country.

* Rally to protest President of Ukraine Victor Yanukovych’s Regime defying the Constitution of Ukraine which is impacting on rights and freedoms
* Respond to call from Ukrainians in Ukraine seeking support to highlight their plight
* To protest the Russian Federation’s Medvedev -Putin Regime violating rights of Ukrainians in Russia
* Closing down of Ukrainian NGO’s , Cultural centre and Library
* Kangaroo courts being applied

Members of Ukrainian community from throughout Australia, Clergy ,Members of Parliament

If ever there was a pointless exercise, this would have to be it.

Just what the Belorussians would say!!

Ukrainians are dirty that they have spent the last however many years fighting for their Independence from Russia and now, the new President is keen to kiss Ruski arse and put the country back where it was. I imagine the protest was in Canberra since this is where their Embassy is ( and the Russian Embassy, which is where they ended up).
I know this because they were all out in Civic on Saturday night, proving that they could drink Vodka and sing at the top of their lungs with the best of them.
Seemed like a decent bunch ( well they shouted me a Vodka).

Might have something to do with this, I guess:

And protesting in Canberra is going to do what?

From the signs, perhaps seeking to get this guy out of gaol – http://en.wikipedia.org/wiki/Yuriy_Lutsenko

I think the Ukrainians are protesting against discrimination & lack of women in the gov. I’m sure are is a whole list of other things on the agenda too

Jayson Carey-Brenton - 38 seconds ago
I agree Shayne.... View
Michael White - 6 minutes ago
Shayne Borger it was a green who responded. Not labor 🤷🏼‍♂️ View
David Ward - 10 minutes ago
She should have publicly apologised after the first speeding offence and not done it again. Most people can accept a single i... View
News 16

Mark Dando - 26 minutes ago
I don't get the level of coverage here of the views of these self-appointed 'guardians'. If the comments on this and the prev... View
Liam Matthew - 50 minutes ago
There is not significant community disquiet about the proposed development. Calling yourself the Guardians of something doesn... View
HSewell - 3 hours ago
Genuine question: why should we pay attention to a self-appointed self-named group like the "Lake Burley Griffin Guardians"?... View
News 1

jamied - 2 hours ago
The chickens finally came home to roost, I suppose. The audacity of uni management to ask for government bailouts in order to... View
News 2

Acton - 4 hours ago
Will resisting arrest constitute assault against a police officer? What if you resist arrest while at a peaceful demonstratio... View
Gregg Heldon - 6 hours ago
It's the ultimate disrespect, isn't it? And should be treated as such. The real question is, will the court protect those who... View
News 1

Arety Kr - 4 hours ago
why only the hospitality sector? All sectors have been hit hard, especially mine in beauty.... View
Business 7

Warwick Alsop - 4 hours ago
I don't disagree necessarily, although we do still have a guaranteed full week of work that isn't just cancelled on a whim by... View
Archie Mac - 8 hours ago
The amount of young people in Canberra who are given an unpaid ‘trial’ needs to be investigated too View
Opinion 2

Adam Briscoe - 7 hours ago
Must be some sort of election on the cards. View
News 17

John Elliott - 16 hours ago
I live within 100 metres of the Establishment and I don't see a problem. So many people are whinging and complaining. The bui... View
News 3

Property behemoth Geocon has been accused of putting profit before children's lives by refusing to compromise with the YMCA Early...
Business 7

A groundbreaking decision by the Full Bench of the Federal Court is likely to have significant implications for any employers...
*Results are based on activity within last 7 days

@The_RiotACT @The_RiotACT
The ACT Government has called on Opposition police and emergency services spokesperson Guilia Jones to quit the portfolio after it was revealed that she lost her driver's licence earlier this year for speeding https://t.co/c4M9OznyBX (46 minutes ago)