This morning we were very surprised to see a media release on community consultation from the acting Chief Minister Katy Gallagher quoting not the ACM, but a spokesperson Simon Kinsmore.

Here’s a screenshot from the emailed release:

Later today it appears there’s been a hurried effort to change the voice to that of Ms Gallagher, but whomever did the global replace had a poor understanding of whitespace:

In addition Skidbladnir has handily highlighted the massive repetition in the release, something the professional or moderately competent avoid like the plague: 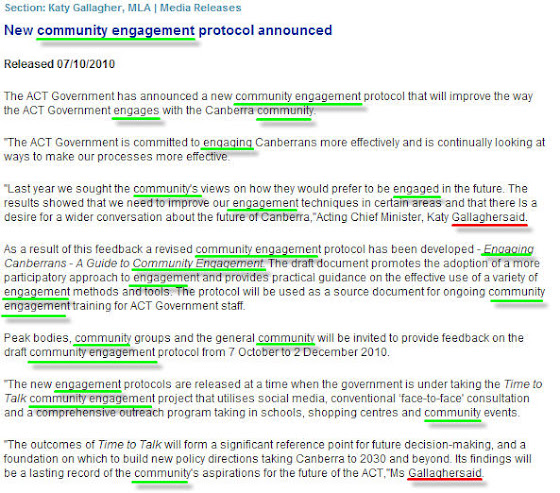 It could just be they’re having a bad day. But when in the process of making some pretty significant changes to the way the ACT functions it would be nice to see some signs that adults are in charge.

On the bright side the draft community engagement guide has turned up and is open for comment until 2 December.

That tactic only works on battlers and working families.

Repetition can be good, over time.

But the primary purpose of a media release is to be so pleasing to other media (the audience) that they run it with minimal changes as a news story. (ideally without asking anyone else what they think about it)

This fails miserably at that.

Wouldn’t that make for more tossers and tossing?

Maybe, but at least it’d be both honest and enjoyable.

engaging piece of press release that.

I thought the word ‘sustainability’ had to be incorporated at least twenty times in any ACT Government media release.

Wouldn’t that make for more tossers and tossing?

Must be the same people who wrote that press release a few months ago saying the ACT Shopfronts would all be “consolidated” in a new building in Civic. After 2CC (and correspondents here) highlighted the massive inconvenience that would cause Stanhope said the following day that no shopfronts would be closed and that the press release had been drafted wrong. The Canberra Times and the ABC as usual were missing in action.

Lucy Baker - 25 minutes ago
Michelle Langsam please share to church? View
Robyn Jones - 4 hours ago
Where is it located View
Monica Tiffen - 4 hours ago
I find it hard to put a light-bulb in!!!!! View
News 16

Chris Hobbs - 3 hours ago
Unless I'm missing something, James cook landed in botany bay on 29th April 1770. The first gun shot was fired on this day. I... View
Linda Stapleton - 9 hours ago
Changing the date will just be like reconcilliation day.. it becomes a nothing action. remember when they said we had to have... View
Spiral - 9 hours ago
The 26th of January is the date that is fundamental to this country. If the First Fleet (or some other colonizing enterprise)... View
News 5

Peter Major - 5 hours ago
Hugo Young Ride in single file and comply with ALL road rules, do not impede the flow of traffic and there are minimal proble... View
Kirby Haines - 5 hours ago
lol sure, costs 10x in admin what it would recover in revenue. Where do you draw the line? Are you going to insist some gorml... View
Hugo Young - 6 hours ago
Adam Jovanovic I'll be sure to suggest to my cycling club that we start running groups rides on paths. A group of 15 people t... View
Opinion 53

Adam Jovanovic - 6 hours ago
Daniel Burden Government owning up to its own mistake buahahha View
HiddenDragon - 7 hours ago
Unless there's a nice little quid pro quo coming up for the ACT in the next federal Budget (dream on....), this outbreak of "... View
Opinion 21

A Belconnen GP surgery was forced into lockdown yesterday (21 January) over concerns that a patient had recently been to...
News 0

@The_RiotACT @The_RiotACT
Sweet Piper had a litter of puppies when she was only a baby herself, and is now at @rspcaact waiting to find her forever home https://t.co/VHBQOCXP4f (7 hours ago)