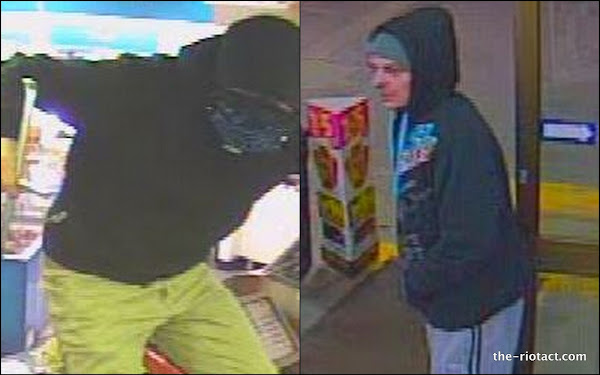 ACT Policing is seeking witnesses after an aggravated robbery took place at the Caltex service station in Kaleen on Friday night (August 24).

Around 11pm a young man entered the Caltex service station and bought a packet of Tally Ho’s from the shop attendant.

The offender jumped the counter threatening and demanding that the staff member open the cash register.

The staff member complied with the request and the offender removed a sum of cash and assaulted the staff member before being confronted by a member of the public.

Criminal Investigation’s Detective Superintendent Brett McCann said that the actions of the member of the public should be praised, however cautioned people to think about their own safety.

The second offender was wearing a black ‘hoodie’, light coloured pants, white shoes and his face was concealed by a dark colour bandana.

“The assault of the staff member was cowardly. The staff member had complied with the demands and there was no reason for this unprovoked assault to take place.” Detective Superintendent McCann said.

Anyone who may have been in the vicinity of the Caltex service station in Kaleen on Friday night and witnessed the aggravated robbery, or knows someone matching the above description is urged to contact Crime Stoppers on 1800 333 000 or via www.act.crimestoppers.com.au. Information can be provided anonymously.

Is there a part of this article missing? What happened when they were confronted by a member of the public?

The answer is in this thread…. Seek, and thou shall find.

Your lucky number is 7.

Is there a part of this article missing? What happened when they were confronted by a member of the public?

Pendant hat on. Pedant, versus pendant.

hahahaah wow that is gold. The light is on but nobody is home…..

hopefully those shitheads who rolled the servo will be rolled shortly themselves.

Hope the police give them a good working over when they are caught.

Correct- Also, whatever happened to the humble machete for servo robberies? Is that too passe’ for today’s brand of scumbag?

Pendant hat on. Pedant, versus pendant.

Here you go, the most awesome thing you’ll see today:

Here you go, the most awesome thing you’ll see today:

I cant for the life of me understand why they don’t place at least one security CCTV at eye level at the counter. Least that way the ID of the perpetrator would be clearer. Mind you the one on the OP to the right is one of the better ones I’ve seen lately.

That is a brain teaser, but recalling some of the shots released from the eye level cameras in ATMs, I wouldn’t say it would make a great difference.

Give it a minute guys, we’ve got killer vid coming up.

I cant for the life of me understand why they don’t place at least one security CCTV at eye level at the counter. Least that way the ID of the perpetrator would be clearer. Mind you the one on the OP to the right is one of the better ones I’ve seen lately.

Seems to get robbed often!!

In both cases they were juveniles and were arrested in a few days.
Let’s hope this one is in the bag as well.

Shouldn’t be too hard to identify them with a clear shot like that, but I’m sure a police mug shot would do them more justice.

To attack the “staff member” after they had already complied with the demands seems to indicate someone with serious issues. To rob someone is bad, to bash them afterwards is just f$&%ed.

Hope they go down hard (but don’t really expect it).

Jose Vega - 30 minutes ago
Because they think they can get more votes as per Trump and his extreme right wing mates in the USA. Just that no other reaso... View
Lifestyle 6

Tom Dale - 3 hours ago
As the APS "permanent staffing" model is still essentially based on the Northcote-Trevelyan Report of 1854 which re-organised... View
Vladimir Svoboda - 3 hours ago
CPSU has been advocating for greater homogenisation across pay bands for a decade and it was Labor policy at the last electio... View
Laurel Haskell - 3 hours ago
People leave the PS and start up their own industry because they KNOW the System..Consultants, Employment Industries, Care In... View
News 150

Raymond Evans - 3 hours ago
Canberra was so much better off when we were part of the federal government , since our local government started everything h... View
Anthony Fernance - 3 hours ago
If it’s only 2 weeks behind then they need to improve the mowing schedule a lot because grass don’t grow 4ft high in 2 we... View
Garry Dodds - 4 hours ago
When the Federal Government were in charge before self Government the lawns were great now it's touch and go..Only in the Sub... View
News 6

JC - 3 hours ago
No it so sure about your statement that longer travel times don’t bring more passengers. In the act we already have an exam... View
Capital Retro - 4 hours ago
Well, the future generations will be paying for it so it's the ACT Labor/Green government's legacy to them. And it's very muc... View
thatsnotmyname - 5 hours ago
Great to see this project finally underway. Very much needed and will be great for future generations.... View
Community 3

Tom Worthington - 6 hours ago
If grassroots community issues are important, then some of the current sitting time could be devoted to them. But having one... View
show more show less
*Results are based on activity within last 7 days

@the_riotact @The_RiotACT
New details shed light on what police allege happened during a dramatic #prisonbreak in July when a car was rammed in broad daylight as jail staff were transporting a #detainee to hospital https://t.co/c8KUV2DWZN (1 hour ago)