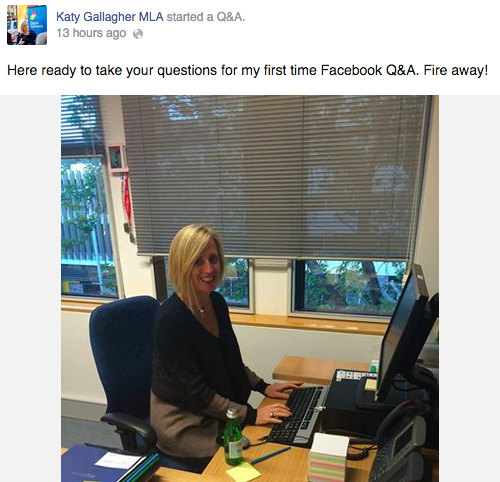 The first 5 minutes or so of the session was a bit like a High School disco – lots of smiling and winking but not much action… Then things got a bit more heated. Questions ranged across a number of topics but the main themes were the legalisation of cannabis, transport (ACTION and Light Rail), urban planning and the Government response to Mr Fluffy.

None of the answers brought about anything particularly new (to my knowledge), although there was some suspicion and sarcasm over the timing of Ms Gallagher’s announcement of ACT Government support for an Australia wide investigation into medicinal cannabis use and request to be part of the upcoming NSW trial. Answers to a range of (increasingly) heated questions pointed back to this statement, which wasn’t satisfying those asking.

The session was interesting to follow, although easy to miss questions that were answered and continuing conversations with the Facebook ordering of information and hidden ‘further replies’.

My vote would be for further sessions yes, but I wonder if the twitter version was better…

There were plenty of questions unanswered (I would guess that she got through less than half of them) which is a bit of a surprise as I would have assumed she would have had some staff helping her out to answer those requiring a ‘canned’ or straightforward response. The promotion for the Q&A said that she would go back to people at a later date with answers to questions that weren’t addressed. I hope this is done via Facebook so that the audience can see her replies the same as those dealt with in real time.

Did you participate? What did you think?

Byron Carn - 9 minutes ago
Another Zoya Patel special View
Janet Ilchef - 20 minutes ago
Matthew Soall Sydney is very like that in terms of the location - oh heavens! Not the eastern suburbs! Etc and I would imagin... View
Stephen Matthews - 22 minutes ago
Fiona Pfeil small towns have their royalty View
Food & Wine 9

Zakzook Chico - 15 hours ago
Patrick J Pentony couldn’t agree more View
William Coats - 15 hours ago
So after 20 years this Labor Greens Government is ready to promise action. I guess we will have to wait and see. View
Patrick J Pentony - 16 hours ago
Rheyce Spears we are at the start of the twentieth year of labor greens gov in the ACT. Not sure you can really blame anyone... View
Opinion 3

Some plots of land are best used by harnessing the powers of an architect to maximise the best views and...
Food & Wine 9

Thai is one of my favourite cuisines to cook and eat. Fresh humble ingredients perfectly balanced to achieve harmony between...

Region Media Group Editor Genevieve Jacobs has been recognised in the Australia Day Honours for her service to broadcast media...
Opinion 49