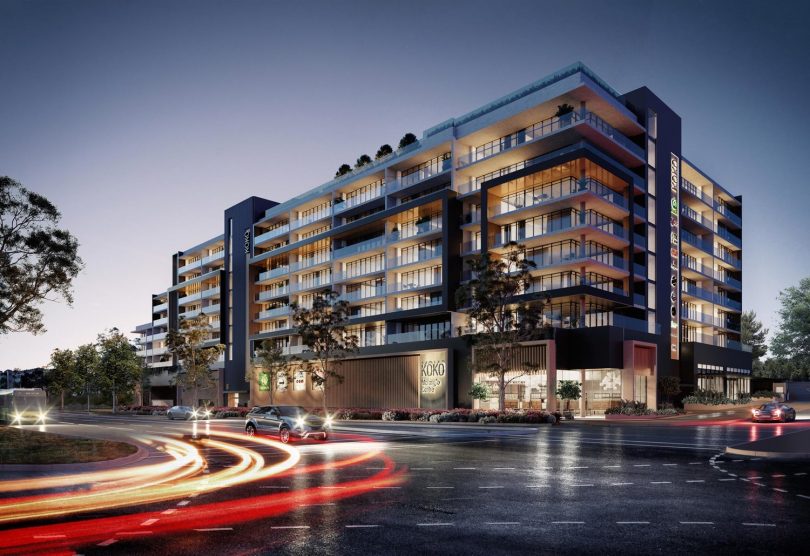 An image of the proposed Koko Molonglo mixed-use development from the website. Photos: Supplied.

John Krnc Group has dumped a proposed KFC takeaway store from its revised plans for the Koko Molonglo development in Wright, as well as reducing the number of apartments and increasing parking.

The company has lodged the revised plans for reconsideration after its original application for a staged mixed-use development across seven leases on the corner of Steve Irwin Way and John Gorton Drive was knocked back in August.

The apartment complex and hotel remain at eight storeys but now include 132 units and 91 rooms, and the company believes it has addressed concerns from the planning authority about traffic, a lack of pedestrian and cycling access, design, poor frontages and inadequate landscaping.

KFC has fallen foul of a public outcry about its suitability for the site.

ACTPLA also required the company to provide a Master Plan to clarify the extent and scale of the development.

It shows the first stage, the apartment complex with ground-floor retail and commercial space including the supermarket and a liquor store; and future stages – the hotel, a smaller four-storey mixed-use complex, including 17 apartments and a further nine townhouses.

The revised plans also show an internal pedestrian and cycle network with connections to public pathways and the public park to the west. A public plaza with grass and shade trees has been added, with a pedestrian bridge connecting it to the residential units in the main apartment block. 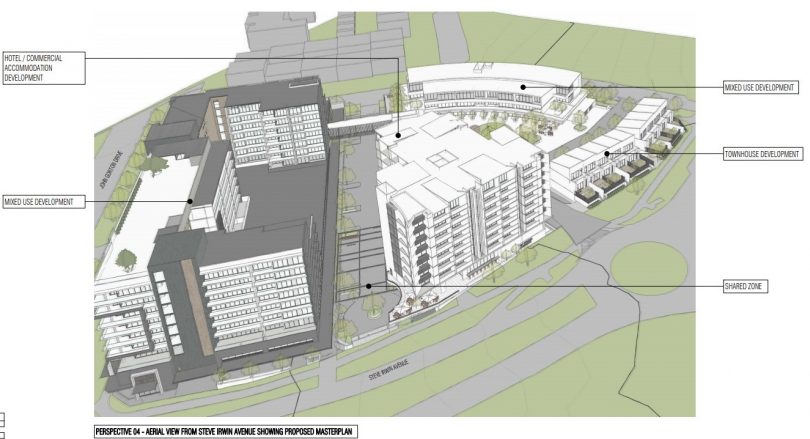 The reconsideration document says the lower level shared zone has been enhanced with greater variety of pavement, landscape and street furniture to create a ”high quality, safe and integrated space with good connectivity to other proposed leases and the plaza area”.

It says the revised plans include more active frontages and increased setbacks.

While the apartment block remains at eight storeys, it has been stepped back on one side and the building height lowered at the interface with existing residential development on Gornall Street, to reduce the scale and maintain solar access.

The Traffic Report says an extra 61 carparks have been provided for the residential apartments, bringing the total to 294, and 14 have been added to the commercial area for a new total of 173.

It says the site has an expected traffic generation of up to 377 vehicles in the AM peak hour and 470 vehicles in the PM peak hour, and this will have minor impacts to the future performance of the intersections, and negligible queues at the basement entries and exits.

The Koko Molonglo website says the mix of one, two and three-bedroom units will sell from $375,950 to $525,950. Commercial tenants include Woolworths Metro and BWS Liquor. KFC remains on the website but the revised plans make it clear it has been dropped.

With no progress in services being established in nearby Coombs, Molonglo residents may be more open to a revised Koko.

Good move. No one ever needs fatty fried chicken.

I remember when James Court(?) was built in the city and it was marketed as having an international restaurant downstairs. It was McDonalds 😂😂😂

Urk. Imagine putting KFC in any proposal, other than one related to a demolition job.

Hurry up and say yes so we can receive a Woolworths!

OMG could you imagine the smell, if you were living above the outlet! 😵🤢🤮

Hotel?? Who would stay In molongolo?

Can't imagine there would be an enormous demand though

A lot more needs to be done for development of this building most turn out bad or eye sores and also limit night life around the area. A lot more planning is needed as they are just after profit that’s all

Steven Lloyd stop trying to destroy our ability to get a super market!

Alexandra oh dam could have had an apartment with a KFC 😆

Julie Macklin - 4 hours ago
I volunteer, although as I also go travelling now at times, these days it is only in between that. I thought of volunteering... View
Sharee Schultz - 7 hours ago
Lynn Nerdal thanks Lynn. That is exactly what I meant 😉... View
Lynn Nerdal - 7 hours ago
Suzanne Milne Sharee certainly did not say that! The reason people volunteer is different for each one of us. We might have s... View
News 47

Tania Shaw - 8 hours ago
Jesse Ward yes I am fully aware of that View
Lance Hallström - 17 hours ago
Lyndon Ogrady did your house evaporate when you settled? If an investor bought it then it's still for rent. If a renter bough... View
John Hynes - 18 hours ago
Gee, the Labor Party getting commercial policy wrong? Never!... View
Opinion 102

Peter Mackay - 13 hours ago
Sean Kinmonth Think about it. Self-driving vehicles are on Australian roads right now, and every year there are more of them... View
Sean Kinmonth - 17 hours ago
Peter Mackay do tell were your information for self driving cars being implemented before the trams are paid off comes from?... View
Maddison Farrawell - 18 hours ago
https://youtu.be/17cxH9p-xps View
Community 20

Chanelle Fyve - 15 hours ago
Can they lend them out to backyard - I know the Canberra bee society puts them into people yards so they can have different v... View
Bente Hart - 24 hours ago
Susan Nicholls 1kg sugar to 2L water heat gently until sugar is dissolved. Cool down. Poor into shallow tray with straw or th... View
Capital Retro - 1 day ago
There are definitely more bees than flowers in my garden this season. I think the urban situation will improve but it's prett... View
Business 7

Susan Guelman - 15 hours ago
I have lived in Canberra for 63 years (emigrated from UK) and wouldn’t live any where else. I get so angry and frustrated w... View
Malcolmo Oz - 1 day ago
Trudy Jane Even worse Jane (and Betty) - many have never even come here!! View
Opinion 24

Amy Jones - 23 hours ago
Britt Shephard shall we attend for a few ciders?? 👍🤷‍♀️ View
Community 39

UPDATE 8:50 pm: The fire remains at advice level. The Pialligo Redwood Forest fire is being controlled and is 147 hectares...
0

https://www.facebook.com/riotactnews/videos/607594253389683 UPDATE 2:20 pm: The Kallaroo fire and the Pialligo Redwood Forest fire have merged, and the fire is now called...
Police Wrap 0

Last year's legislation to make life easier for renters is having unintended consequences, including higher rents and an even tighter rental...
*Results are based on activity within last 7 days