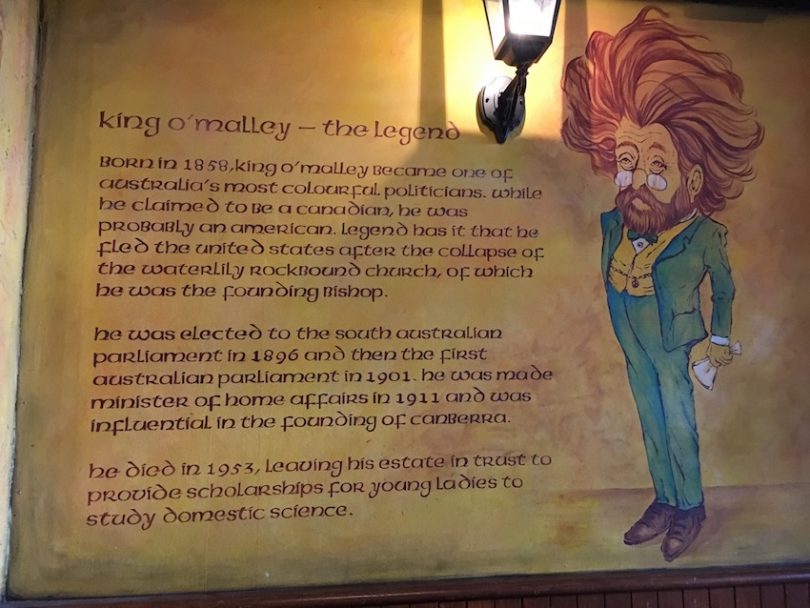 The popular Irish pub in Canberra’s city centre, King O’Malley’s, is a cheeky reference to its namesake, who was, in fact, a teetotaller.

So how does a teetotaller get a pub named after him?

King O’Malley was a flamboyant character with big auburn hair and beard. He wore smart clothes and had a great gift of self-promotion.

He was elected into the first Federal Parliament and became Minister for Home Affairs. He said he was born in Canada (but is believed to have been born in the US) so he could be elected to Parliament, the pre-requisite being that elected members had to be British citizens. He deflected suspicions about his eligibility and also allegations of fleeing the US after embezzling funds. He had a varied career that included selling insurance, mining speculation, journalism and he was even a ‘bishop’.

O’Malley started the Waterlily Rockbound Church – the Redskin Church of the Cayuse Nation, Texas in the US, where he was its first and only (self-elected) bishop. It was at that time he converted to following the temperance movement. He disliked alcohol, calling it ‘stagger juice’.

O’Malley was interested in social issues and the rights of women. Even with his temperance views, he lobbied for the law to ensure that barmaids be treated with respect because “innocent girls are back slapped and monkeyed with”.

As Home Affairs Minister, O’Malley played an important role in the selection of the site for Canberra. He was also a keen advocate for the selection of Walter Burley Griffin’s design from the competition that had attracted 137 entries worldwide.

In 1911, just a few short years after this area was chosen as the site for the new capital, and before the city was even named, O’Malley instigated that new liquor licences be banned.

He claimed alcohol had a depressing influence and said, “stagger-juice and efficient public business are absolutely incompatible”. So, O’Malley triggered a type of prohibition that was to continue until 1928. This was the very first ordinance passed in the new Federal Capital Territory.

Unlike the US-style prohibition, the laws only prevented the granting of liquor licences. Locals could still bring alcohol into the Territory and drink it here.

One anomaly was the Cricketers’ Arms Hotel (running from the 1860s until 1918). It was the Territory’s only pub and was already operating, so it got around the rules.

An irony, too, was that alcohol flowed freely at the naming of the city in 1913, and King O’Malley was a key participant in the formal proceedings. O’Malley’s efforts “that the Territory shall be dry” did not quite succeed as he had hoped. 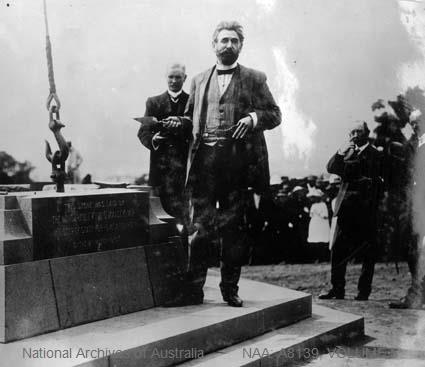 Queanbeyan benefited from the alcohol licence prohibition in Canberra. It became a town of five busy pubs. Canberrans would head over the border for a night on the town, particularly on Friday and Saturday nights. Reference has been made about the Queanbeyan policeman who didn’t want to make too many arrests of drunk and disorderly patrons because if he locked people up, his wife would have to cook them meals and she hated doing so.

The National Archives holds a fascinating glimpse into this time with digitised letters from organisations and individuals supporting prohibition.

Prime Minister Bruce did not attend a Returned Services dinner on Armistice Day in 1927 where alcohol was served, resulting in many letters supporting his “courageous attitude”.

Children were involved as well, writing letters to their local MPs. Young Albert Glassborow of Big Pats Creek, Victoria, asked that the “spread of strong drink be stopped in the National Capital … Once men taste it they spend all their money on it and many little children suffer through not having enough food and clothing”.

Yet a guidebook, ‘A Descriptive Guide to Canberra’, published for workers moving to Canberra in 1927, included a chapter specifically dealing with ‘The Liquor Question’. It advocated driving to Queanbeyan to bring grog back by the cartload, with the advice that “the majority of workmen thus inclined save their thirst till the week-end, then swoop down to Queanbeyan”.

And so it was that Canberra was dry for almost 18 years until a resolution was passed in 1926 by the Joint House Committee making way for a bar in the Provisional Parliament House.

A plebiscite was held in 1928, and King O’Malley’s 1911 ban on alcohol licences was overturned in the Federal Capital. 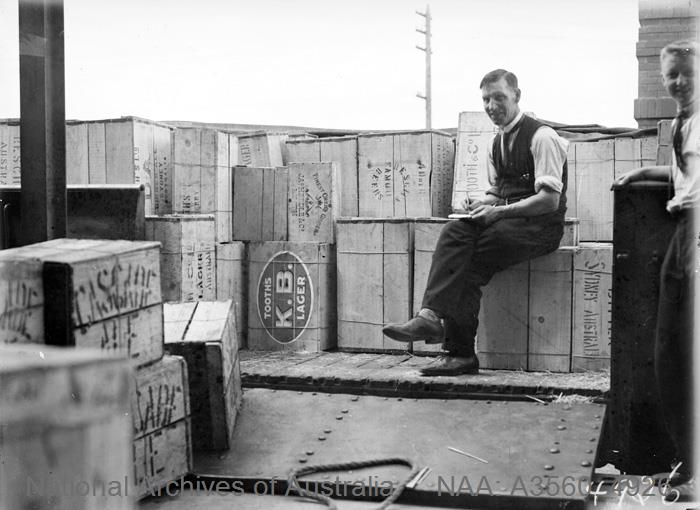 Prohibition ended in 1928. The first consignment of liquor following the lifting of prohibition in the Federal Capital Territory. Railway truckload of beer cases with a tally clerk. Photo: National Archives of Australia (A3560, 4926).

So when lockdown finishes, and we are free to go to the pub again, perhaps you can reflect on this part of Canberra’s history and why Canberra doesn’t have a pub on every corner. You can go to King O’Malley’s and check out the murals on the walls that also tell this story and the teetotaller that started it all, the flamboyant King O’Malley.

Reading reports from back then, he was even dodgier than our current politicians!

“It might be noted, incidentally, that O’Malley’s egotism led him to anticipate the work of the Governor-General and Prime Minister Fisher at the foundation stone ceremony by arranging, three weeks earlier, an impressive function at Canberra, at which he drove in the ﬁrst peg of the city survey, on Capital Hill. To temper this arrogance somewhat, he brought along also the Speaker of the House of Representatives, Mr Charles McDonald, to drive a second peg – arcades ambo (blackguards both).”

“As Home Affairs minister in 1910, O’Malley was in charge of planning Australia’s national capital when he also revealed he belonged to the Water Lily Rock Bound Church of the Redskin Temple of the Cayuse Nation. He said he founded the church in Mexico and was archbishop for three years, leading 3000 worshippers. Later he said it was founded to benefit from land grants for churches, and he worked “miracles” by getting signs from heaven as coloured lights, set off by an accomplice on a nearby hilltop. Emulating Moses, O’Malley ascended the hill and returned, with stone tablets engraved with tenets of his religion.

O’Malley was forced to flee when his accomplice revealed their scam.”

There certainly is an excellent musical “The Legend of King O’Malley”, written by Bob Ellis and Michael Boddy and first produced at the Jane Street Theatre in Sydney in 1970.

Directed by John Bell, it was one of the Australian-written theatre that kicked off other groups like the original Nimrod Theatre. It’s been revived several times – seeing at the New Theatre, Sydney’s Newtown gave it a particular poignancy.

So the pollies had a bar in Parliament House for two years before the rest of the ACT. How unusual for politicians to get benefits the ‘regular’ citizens don’t.

The joke was that there was no prohibition on the consumption of alcohol so vast quantities found its way into the FCT. There were many cartoons about the ‘pilgrimage’ to QBN after work and at weekends. Despite the plebiscite vote being over 50% in favour of licencing arrangements similar to other states, the FCT had trouble implelenting that and ran its own bars including the disastrous liquor cafes at Manuka, Civic and Kingston. The licences for the latter two were bought by Tooheys on condition they build pubs – the Hotels Kingston and Civic.

Memories. I saw “The Legend of King O’Malley” in the 1970s at the now demolished SGIO Theatre Brisbane. A piece of musical theatre, it was written by the late Bob Ellis and the late Michael Boddy, a well known playwright and writer.

There’s an absolutely terrible musical about him too…

He was a conman and one of the biggest advocates of the white Australia policy. He shouldn’t be celebrated

King O’Malley was much, much more than ” also a keen advocate for the selection of Walter Burley Griffin’s design” – he decided it.

The senior administrators of the time had made up their own mixture of the entries and prepared a conglomerate plan. O’Malley over-ruled this as the Minister for Home Affairs, which was a very different portfolio then. He said that Griffin’s plan had been chosen and that he would be brought to Canberra to implement it.

Where Griffin was continually frustrated by them, to the extent of a Royal Commission in 1917. Canberra is so much the better for O’Malley’s decisiveness.

Christopher Matt this guy and George were besties!! T

Adrian Giampietro haha! they helped each other build their pubs a couple hundred years ago 😂😂😂

hahahaha back in the mid 19th Centaury

Good. Naming your child a title is a “tragedeigh”

John Moulis Except that he was born in the US where such things are still allowed, so the irony is possibly non-existent 🤷‍♂️

Adding insult to injury is about as Australian as it gets 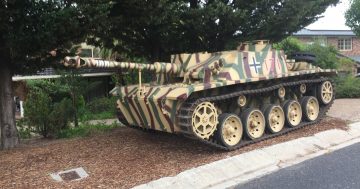 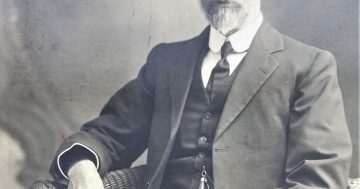