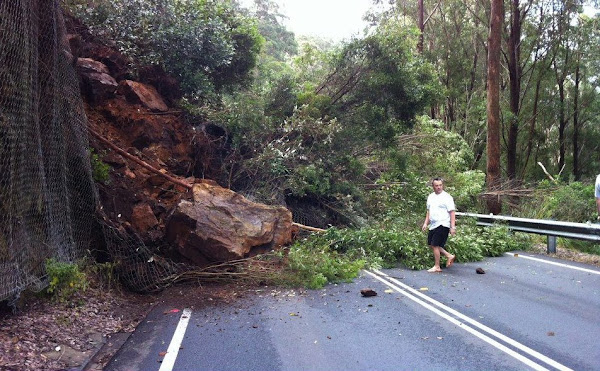 The NSW RTA is showing the Kings Highway closed at Pooh Corner in both directions due to a landslide.

They advise taking the Illawarra or Snowy Mountains Highways as alternative if you’re heading to the coast this weekend. 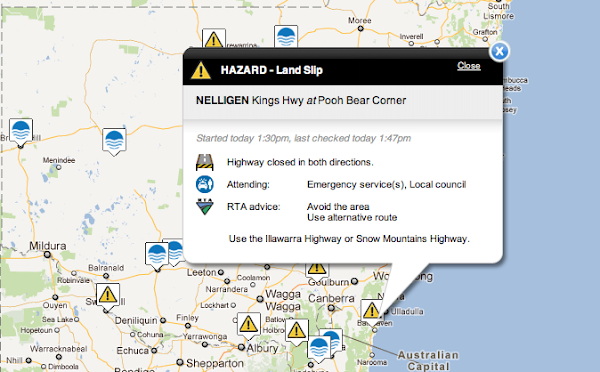 Both lanes of the Kings Highway are completely blocked with rubble and trees after a huge landslide on the Clyde Mountain.
Police are advising only Nelligen residents should use the Kings Highway as it is expected the highway will be closed for some time.

It is believed the cliff landslide occurred at about 1.30pm this afternoon, about 400m west of Pooh Bear corner.

It is not known at this stage if anyone is injured or any vehicles are trapped amongst the rubble, but police have inspected the site and say there are no obvious signs anyone is trapped.

Going through Nerriga only adds 30km to a trip to Ulladulla (considerably more to the Bay though….

The Very Serious Issue™ that you haven’t addressed though JB, is – Did Pooh Bears Cave survive the landslip??!!

Queensland had a landslide recently too, but they didn’t shut it down…

I always thought that was just a nickname used by holidaying public servants from Canberra.

i have a photo of the landslide but not sure how to post it?

Is Brown Mountain still closed? RTA thing seems to suggest it isn’t. The crazed Canberra drivers will NOT like the Nerriga Route, I think part of it still has (gasp) DIRT! And everyone knows, these days you can’t drive on DIRT unless you have a 4WD.

brown mountain is open again, but not sure you’d trust it until things dry out a bit.

With the Brown Mountain pass also closed isn’t it about time the NSW grubbymint think about at least ONE reliable highway down the mountain?

Connect the dots – this WAS the earthquake. You all thought you got off scott-free, but now your beach weekend is tantalisingly out of reach. It’s God’s way of punishing us all for turning out in such huge numbers to see that pagan Richard Dawkins.

This should be good. Might be worth grabbing a deck chair and esky and heading off to watch the fun!

I was overtaken by a local in an Excel on the dirt bit many years ago, he was absolutely caning along. I was impressed.

Connect the dots – this WAS the earthquake. You all thought you got off scott-free, but now your beach weekend is tantalisingly out of reach. It’s God’s way of punishing us all for turning out in such huge numbers to see that pagan Richard Dawkins.

There’s two things you need to remember when you drive on difficult roads:
1) Go slowly – slow enough that you can comfortably stop well within sight.
2) If traffic builds up behind you, pull over and let them go.

Obviously use gentle control inputs to reduce the risk of sliding.

It saddens me that many of the drivers on out roads might be sufficiently poor at operating a motor vehicle that they cannot, will not, or should not consider attempting 18km of unsealed road.

Having said that, I am happier the less other people are on a road with me, so would like to suggest a few other roads that could be converted to dirt.

I drove past on Thursday and noticed a minor slip. Didn’t think there had been enough rain to cause a major slip, but maybe it has all accumulated over the past few months and made the ground unstable.

Does anyone know what the Murrays service to/from the coast will be doing? Running/not running, and if running, what route?

Can always go via Moss Vale/Kangaroo Valley if you are not heading somewhere on the far south coast.

Any news about Pooh Bear himself. Is he OK?
Is he injured & trapped inside his cave, dare I say it, entombed?

Good thing that wire mesh was there to stop it.

Araluen Road is able to be driven in a rear wheel drive car. Rough, wet and scary, and Mr Poetix nearly soiled himself, but it can be done. Do not try it at night though.

It takes forever, too.

Ursula Wilde - 17 minutes ago
I would of thought the lift section section maybe used as a icon entrance to the bay or dumped of shore for a diving tourist... View
Jessica Thatcher - 44 minutes ago
That’s a bit sad 😢 that’s when you knew as a kid you were finally there!! View
Jay Irvin - 1 hour ago
Grace Irvin boycotting Batemans bay now View
Opinion 51

Capital Retro - 2 hours ago
She sold me a pair of shoes from her Fyshwick shoe store in 1983. I still wear them but I think she outlast me. View
Frank Koch - 3 hours ago
Margaret Freemantle no I don’t but I know of her and she has done well so we shouldn’t begrudge her in any way. Most peop... View
News 57

Trevor Senton - 2 hours ago
Scrap it ,the sooner the better , and put a decent bus service around town presently it is under utilised with the improper t... View
Joe McDowell - 3 hours ago
Just scrap it View
Tom Worthington - 3 hours ago
A trackless tram would be a better, cheaper option from Civic to Woden, and could be built sooner. It would not need track to... View
Community 3

Pat Gagel - 2 hours ago
I have telecommuted on the trains since graduating in 1992 on and off. I used to get strange looks when I worked away on my V... View
JS9 - 2 hours ago
NSW is already procuring bi-mode trains as part of its fleet that will include replacement of those running in to Canberra: h... View
Tom Worthington - 3 hours ago
We need a new railway station, but it would not be cost effective to put it in the city centre. It could be instead located a... View
Courts & Crime 1

Leonard - 2 hours ago
No mention in this article of where she stands on the Holden/Ford debate. View
Lifestyle 41

Linda Stapleton - 5 hours ago
mmmm war with a magpie...so who is meant to be the superior species here? No offence meant but surely making friends with the... View
Guy Noble - 5 hours ago
Jim Vizovitis yup play nice and they do,,,, we have had the same parents coming to us to feed there kids for years now View
News 248

Leonard Kelton Smith - 5 hours ago
Very good but I hope you will go back and replace any that die. MY local council in NSW boasts about the number of trees they... View
show more show less
*Results are based on activity within last 7 days

A Canberra man has died after being struck by a car from behind while walking in East Queanbeyan on Wednesday...
News 15

Health Minister Rachel Stephen-Smith said vaccine mandates for industries like construction were not necessary at the moment due to the...
*Results are based on activity within last 7 days

Residents of Canberra, the South Coast, Geelong and Melbourne have had their mornings shaken up by a magnitude 5.8 earthquake...
News 57

@The_RiotACT @The_RiotACT
Families staying at @RMHCanberra had a sweet surprise when @KokoBlackAust Canberra and My Sweet Lady donated hampers of chocolate and cupcakes https://t.co/Wq9JvHQ4vV (37 minutes ago)

@The_RiotACT @The_RiotACT
Popular Canberra Raiders player Sia Soliola has today announced his retirement from the NRL. As he hangs up his boots, he will be remembered as the greatest clubman to ever play for the Green Machine, writes Tim Gavel https://t.co/VnHyhE6yHP (2 hours ago)

@The_RiotACT @The_RiotACT
Chief Minister Andrew Barr has moved to quell concerns over the level of support that will be available for businesses that will be unable to open or operate fully under the proposed roadmap out of lockdown https://t.co/Gx9KjBB0Cx (3 hours ago)