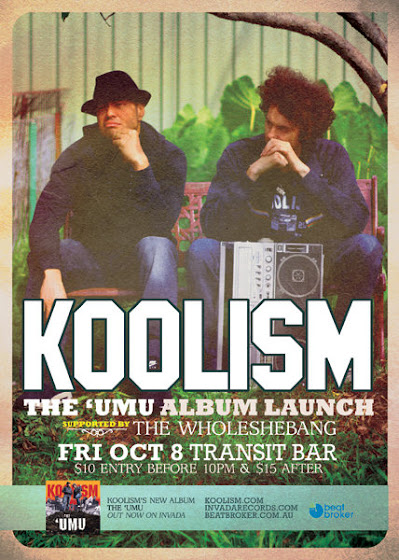 KOOLISM are back, this time with the launch of their new album THE ‘UMU. This new record has already received momentous amounts of praise and we are lucky enough at TRANSIT BAR, to be able to witness a grand performance of new and old work by DJ DANIELSAN and MC HAU.

Front man and lyricist Hau (Langomi-e-Hau Latukefu) uses his Tongan heritage to bring strong positive energy to the mix and has a reputation as one of the finest wordsmiths and freestyle MCs Australia has to offer.

Renowned DJ and producer Danielsan (Daniel J Elleson) is one of Australia’s top DJs and his production skills have seen him remixing tunes for Motown and Ministry. Respected for his own accomplishments, he is also found regularly filling the judges seat at notable DJ competitions (DMC).

Koolism’s 1998 release “Lift Ya Game” is tagged as one of the classics of Australian Hip Hop. Each new Koolism release follows in its footsteps and the movement of Hip Hop culture, and music to which they are dedicated and which supports them, continues to grow stronger.

Locally, Koolism are the definitive when it comes to any hip hop program, appearing on multiple home-grown compilations and performing at live events like the Big Day Out, Vibes On A Summer’s Day and Freaky Loops. Their genuine approach to music has also been recognised on a global scale, with invitations to perform with some massive international artists, namely De La Soul, Grandmaster Flash, Jurassic 5, The Roots, Jazzy Jeff, DJ Shadow, Massive Attack, Kool Keith, X-Zibit, Black Eyed Peas, Jungle Brothers, Rock Steady Crew and Blackalicious to name a few.

The duo feature in Australian street press on a weekly basis and have received rave reviews in publications abroad such as Blast in Japan, the UK’s Muzik Mag and Hip Hop Connection, even the New York Times.

Transit bar welcomes the boys with open arms, as they come to offer us new music that we have been waiting 3 years to hear.

One Response to Koolism Album Launch! The ‘Umu
Filter
Showing only Website comments

Koolism are the truth. Get behind them Canberra..

chewy14 - 20 minutes ago
Even though I don't agree with the proposal, your example it not close to being a good comparison. You eating yourself to dea... View
chewy14 - 21 minutes ago
No point now, our Vax rates are too high to make it worth the effort. View
Fred Colon - 1 hour ago
Absolutely and it's a great thing. But it is ne in a hundred - over 12. View
News 42

Renea Hazel - 23 minutes ago
Judith Devitt he is an excellent school principal, this is disappointing :( View
Kieran Angus - 1 hour ago
Rade Kosa yeah and? We get boosters of a bunch of vaccinations? Tetanus is a good example. View
Rade Kosa - 1 hour ago
Kieran Angus one word boosters. 😉 View
Sport 132

Alan Vogt - 40 minutes ago
I have travelled and raced at a good number of mountain bike destinations in British Columbia (including Squamish, Whistler,... View
Jim Reid - 2 hours ago
ACT Govt doesn’t need any more $$ they’re literally the worst financial managers and they wouldn’t be transparent as to... View
Graham Smith - 2 hours ago
Michael good suggestions. Another consideration is certainty that the revenue from pay parking is well and truly sufficient t... View
Community 24

Lindi Loo - 2 hours ago
Are these two 'paid actors'? If not, they should be! Brilliant 😂👏... View
Emily O'Shea - 2 hours ago
Jen O'Shea watch the video in this View
Shannen McCann-Geiger - 4 hours ago
The wife looks super happy to be there View
Lifestyle 10

Acton - 3 hours ago
Zed is only one of 4 ACT senators so why don't one of the others sponsor a bill? It can't just be the fault of the Morrison L... View
TheSilver - 4 hours ago
How about the government stop restricting freedom of association, freedom of movement, the right to privacy and freedom of sp... View
Samuel Gordon-Stewart - 8 hours ago
I find it bizarre that the majority of society seems to think suicide is tragic and has to have ample resources thrown at pre... View
Business 7

On the back of a historic deal between Australia, the UK and the US for a new fleet of nuclear-powered...
Best of Canberra 200

For many, the thought of visiting the dentist can come with a wave of anxiety. But even when you do...
Best of Canberra 53

@the_riotact @The_RiotACT
The ACT Property Council and @MBA_Canberra are concerned that the Territory's #construction sector - which they say could lead the economic recovery after lockdown - is suffering from a loss of skilled #workers to Melbourne and Sydney https://t.co/VM8wwQwYsS (13 minutes ago)

@the_riotact @The_RiotACT
Former #gambling addict Markus Fischer used to win big, but then he began chasing his #losses and his life spiralled out of control. Now reformed, he's encouraging others to seek #help during Gambling Harm Awareness Week https://t.co/fzdCR1Zec7 (1 hour ago)