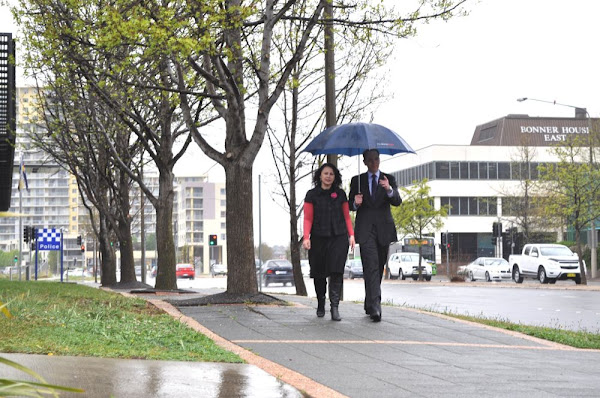 Team Katy have announced an expanded traffic team in ACT Policing if they are returned to government:

if re-elected in 2012, ACT Labor will invest $6.8 million for a road safety operations team, 8 more police and four dedicated vehicles to help prevent fatalities and serious crashes on our roads.

This investment will also see the ACT’s first alcohol ignition interlock program to make it harder for high-risk drink driving offenders to re-offend.

Building better roads?? Like the roads in Gungahlin? You have got to be kidding…yeah

If we can’t do it right the first time then we will try harder the second time. lol

What an insult! how about a policy to stop stupid people (like Jim) from driving in the first place.

That’s gonna do sweet F-A if they don’t actually do a better job of enforcing and policing responsible service of alcohol, though.

There are many crimes in Canberra that don’t get properly investigated or don’t get investigated at all. Presumably because for some reason giving people fines for not wearing seat belts or going over a speed limit is more important than solving rape cases, assaults or break-ins.

Well maybe if they invested revenue collected from speed cameras into road safety programs they wouldn’t need to make this commitment in the first place. Then they may be taken seriously.

Forget traffic patrols, how about general patrols to catch some of the armed robbers that seem to be multiplying like cane toads.
PS. Not all armed robberies are being reported in media….Is this a policing matter or a political matter?

lol
4 new cars and 8 new officers??? Times that by five and we may have a start?

8 more police? That’s not even 1 new officer for every crappy year of labor government. Tokenism at its best.

Wentworth Av is getting to the point where I’ll have to swap the road bike for a motocrosser just so I can negotiate the trip to work…
Worst major road in Canberra and has been for a while.

I’d be laughing except that I know there are voters stupid enough to believe her.

Courtney Matthew - 2 hours ago
Jason Matthew! These are those ladies I always see that wear red and purple and I always wonder what group they belong to! Av... View
News 26

Fortress Epiphany - 2 hours ago
Trevor Wilkins vets affairs were in there till about 3 years ago. View
Robert Knight - 4 hours ago
Jenny Gordon Avery it’s a great view up there! View
Archie Mac - 5 hours ago
It will always be MLC Tower to me. My family had the cleaning contract. We kids had great fun going up and down in the elevat... View
Community 8

Katy Did - 3 hours ago
I remember View
Property 30

Paul Murray - 4 hours ago
Charles Godworth it’s coming from the Canberra Racing Club. They see the light rail as a great opportunity for them to make... View
David Rudland - 7 hours ago
Wow....really more units. I want to say so much but the words are expletives. View
Opinion 5

russianafroman - 5 hours ago
Great article. It's time the government starts addressing the basics and serving the people. View
salvatge - 8 hours ago
Excellent commentary, from a local expert with skin in the game! View
Mello - 9 hours ago
It is time to stop this self government experiment. We simply don't have the numbers to collect the revenue.... View
Community 39

Although Summernats was cancelled this year due to COVID-19, streetcars continued to make the news. ACT Policing worked closely with...
News 45

Canberra Racing Club is finalising initial redevelopment plans for Thoroughbred Park in Lyneham that could include three to six-storey apartment...
News 26

@The_RiotACT @The_RiotACT
Hot in the City: Love gaming? Enjoy it with your food & your friends by your side at Reload Bar & Games https://t.co/i24LIWpdje (45 minutes ago)

@The_RiotACT @The_RiotACT
Been looking for a large, quality family home in one of Gungahlin's most exclusive areas? This stunning residence could be all you’ve ever wanted + so much more https://t.co/lh17g6PgsK (2 hours ago)