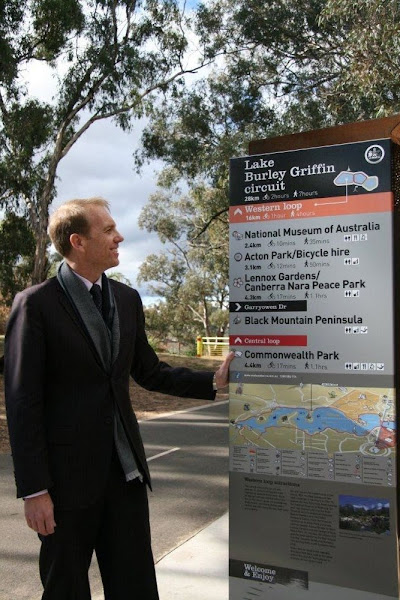 Simon Corbell has donned a very spiffy scarf to get down to the Lake and launch new signage for the west-basin loop:

Mr Corbell said the new signage was part of a $1.1million initiative to encourage Canberrans and tourists to walk or cycle around our waterways.

“A total of 37 signs have been installed around the 16km west-basin loop as well as four bubblers and 14 seats,” said Mr Corbell.

“Signage includes distances and times to walk and cycle to popular destinations, maps, and details of nearby attractions and heritage sites.

“The lake recreational direction signage project has been in development for approximately 18 months and will see the installation of over 100 signs across the ACT.

“The ACT Government has identified the need for safe walking and cycling access to a number of destinations around Lake Burley Griffin including the National Zoo and Aquarium and the National Arboretum Canberra. Paths to these destinations have been completed as part of these works.

Lakes Tuggeranong and Ginninderra, and Yerrabi Pond are all going to get similar works.

Taking my ‘negative reply to everything’ hat off from a minute, I personally give these the thumbs up from both a tourist and public health point of view! The signs have good info and the bubblers are great too.
Anything that gets more people out and about is a good thing IMO, but maybe moreso in summer! 🙂

I think they’re a good idea. I know my way around there, but lots of tourists or even the occasional recreational cyclist or walker may not.

Now if they would only make a separate footpath, I’d be totally happy.

..mmm a waste of money, if you are on one of those paths don’t you know where you are already (having planned and looked at a paper or online map) ?
Aren’t they a potential cycling hazard as they are nicely placed at shared path intersections ?

Nada Krstin - 4 hours ago
Redmond Herrington OK, since covid has been a GLOBAL pandemic and vaccines have been available and approved for at least 18 m... View
Opinion 48

nadine - 6 hours ago
"Mr Barr said the ability to travel interstate ... would be entirely subject to border decisions made by other states" Given... View
kenbehrens - 7 hours ago
Vaccines offer protection against severe infection and in most cases, death. It doesn't prevent people contracting Covid, get... View
kenbehrens - 8 hours ago
Sam, With respect, you appear to be poorly informed. Flu typically kills the elderly or those with health conditions. It is a... View
Sport 19

Dave Horsley - 6 hours ago
How would a club like Penrith convince quality players to travel 6+ hours every week plus training when they could just join... View
Sione Nonehh Taufui - 6 hours ago
Sione Taufui ouaaa 😂😂😂 party party... View
Opinion 3

James-T-Kirk - 7 hours ago
Nah... it's Canberra Avenue. It needs a grand covered entrance. A couple of traffic lights and some turning lanes. Who cares... View
Dilkera - 9 hours ago
Absolutely ludicrous to have a grand drive in entrance on Canberra Avenue, which is long past being a grand avenue. It is a c... View
News 19

@The_RiotACT @The_RiotACT
Get your votes in for the people's choice award in the inaugural National Capital #Art Prize, an annual award for #Australian artists that aims to showcase Canberra as a cultural hub https://t.co/aT9nII8kTX (6 hours ago)

@The_RiotACT @The_RiotACT
It's war at Murrumbateman, where a particularly assertive #magpie has it in for #winemaker Bryan Martin - and he has the video footage to prove it https://t.co/wuXWsjvgdt (7 hours ago)

@The_RiotACT @The_RiotACT
The iconic #BatemansBay Bridge is almost completely gone, all that remains is a few piers rising from the water https://t.co/1k3VBOuBMt (8 hours ago)