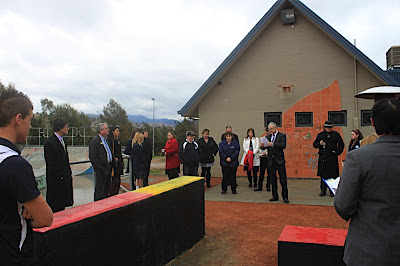 Minister for Children and Young People, Joy Burch, has launched a new skate park at the YWCA Mura Lanyon Youth and Community Centre:

“Discussions with the young people identified the enhancement of the area around the skate park as an area of need,” Ms Burch said.

“The young people consulted with the local community and developed plans and drawings for the area to make it more engaging and user friendly, including a barbecue and seating area.”

“The young people had a chance to play an active role in the revamp and get a taste of what it is like to work in bricklaying or associated industries and were awarded with three units of competency from the Building and Construction training package.”

The students also undertook training in Occupational Health and Safety and received the national occupational health and safety induction card (the White Card) prior to commencing the program. Three of the young people involved were offered apprenticeships in bricklaying by the ABBTF.

whats worse – the bogans in tuggers, or the junkies in the inner north?

How can you be so sure that is not the parents?

I am sure it is the parents as well.

I thought that was a picture of a funeral.

Yeah nothing shows empathy with youth issues or sk8r culture more than a bunch of pollies and hangers-on at a photo op in cheap suits. Gnarly, dude!

I think the youth of Lanyon would prefer a burnout pad or dragway, judging from what I regularly see and hear.

How can you be so sure that is not the parents?

I thought that was a picture of a funeral.

I think the youth of Lanyon would prefer a burnout pad or dragway, judging from what I regularly see and hear.

Gavin van der Hout - 15 minutes ago
I hope that stats are kept showing that these religious headwear doesn't provide protection, and then we can use those stats... View
Gavin van der Hout - 16 minutes ago
Really... Well, as long as your belief protects you when you crash... Everyone knows your headwear won't save you, but hey, y... View
Peter Athey - 19 minutes ago
3 words; flying spaghetti monster serious - look it up. buy yourself a colander... View
News 104

Julie Macklin - 39 minutes ago
James Dof And no one has ever expected trades people to cycle from job to job with their tools. That is just a straw man argu... View
Heather Grant - 3 hours ago
Suggest they hire extras from Deane's and Keir's (and anywhere else close by that have spare buses for hire). Instead of look... View
Ashley Wright - 7 hours ago
Cary Elliot Johnson do you have an example of such a city but when defining decent? define it from a daily users point of vie... View
Opinion 47

Amanda Evans - 4 hours ago
Good idea, but what about all the other businesses that suffered because no one was around because of the smoke? View
Adele Craven - 15 hours ago
More effective for workers and patrons would be doing more to reduce vehicle emissions View
Lisa Logue - 19 hours ago
I feel sorry for the staff expected to work outdoors in hazardous air quality. View
News 63