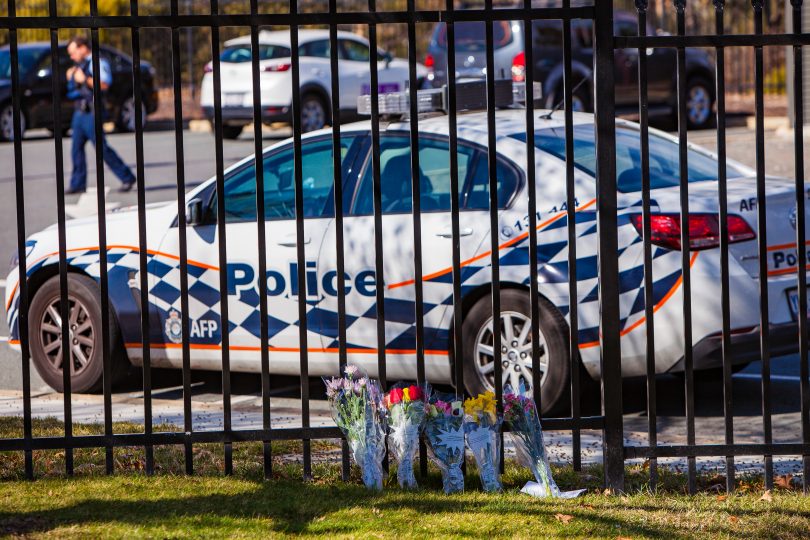 Flowers left at St Clare of Assisi Primary School pay tribute to the father who died in the explosion. File photo.

WorkSafe ACT has confirmed that a leaking gas bottle was the cause of the explosion that killed a Conder father at his child’s school last Thursday.

The work safety regulator has also confirmed that the 51-year-old man was standing next to his vehicle when it exploded in the St Clare of Assisi Primary School car park just before 5 pm.

The man was there to pick up his child from after-school care. Police have not released his name.

Work Safety Commissioner Greg Jones said preliminary investigations into the incident indicated that an acetylene gas bottle had leaked into a compartment at the back of a work ute, and an ignition source then caused an explosion.

WorkSafe has issued a reminder to industry about the safe storage and transportation of gas cylinders.

“WorkSafe ACT continue to work with ACT Policing investigating this tragic incident and our thoughts remain with the friends, family and colleagues impacted,” Mr Jones said.

“Acetylene is a fuel gas which when combined with oxygen is generally used for welding, cutting, localised heating and flame hardening.

“Acetylene and other flammable gas cylinders including oxygen, propane and butane, are commonly transported in vehicles by tradespersons such as plumbers and construction workers involved in refrigeration, welding and gas fitting and other similar activities.

“In addition, householders commonly transport their LPG gas cylinders when they get their BBQ bottle swapped or refilled.

“If there is a leak of gas then any ignition source – often the vehicle’s electrical system, can cause a significant explosion.”

Mr Jones said gas cylinders must not be carried in the passenger compartment of any vehicle and good ventilation was essential.

“If cylinders must be carried in closed areas of vehicles, a storage cabinet with outlets in the base of the cabinet vented outside the vehicle must be used,” he said.

“Finally, ensure persons using or transporting gas cylinders are appropriately trained and instructed on the proper handling, storage and transport of gas cylinders including emergency procedures,” he concluded.

Lee McDowall - 2 hours ago
Nurses should be paid so much more. Garbos think they have a tough job, swap for a day then ask for 12% over 3 years. Nurses... View
Roberta Lynne Anning - 3 hours ago
Give them the same pay that the garbos get, and give the garbos the same pay that the nurses get. They just might shut the he... View
Rodney Thompson - 13 hours ago
Someone who actually deserves a payrise. View
Community 22

Clare Jones - 10 hours ago
Why say these are open when the two we've been to still have temporary fencing and one even still had a tractor inside the fe... View
Business 5

Ashley Wright - 13 hours ago
Chris Olsen actually Clinton was right. William Hovell drive had the limit lowered between Coulter Dr and Bindubi street beca... View
Tolga Altinbas - 16 hours ago
Because one is a roadwork sign. And the other one is always there on the pole View
Wang Chow - 17 hours ago
My guess is that they changed the speed limit in Chisholm/Richardson because its cheaper than putting in more speedbumps that... View
News 21

Darron Marks - 20 hours ago
"But in this world nothing can be said to be certain, except death and taxes" View
News 4

Bill Gemmell - 20 hours ago
Additional well-located transport infrastructure is a plus. However, maybe they should be thinking about covering these with... View
Greg Batten - 23 hours ago
Great idea for both ACT light rail and bus networks. View
Opinion 22

Julie Macklin - 22 hours ago
Many other countries don't have the unpopulated distances that we do. It's a different matter driving an electric car in Euro... View
Lifestyle 1

Chief Minister and Treasurer Andrew Barr has ruled out a specific tax on electric vehicles but that doesn't mean EV...
What's On 0

Here's our top 10 picks for your week, including plenty of music on Friday and Saturday, and a fascinating talk...

It seems too many Canberra motorists are still rushing to meet police, with speeding offences bringing them to highway patrol...
Opinion 27

WorkSafe ACT enquiring into cause of Skyfire explosion

@The_RiotACT @The_RiotACT
Hot in the City: Herbert’s at Evatt is quickly becoming a beloved new local https://t.co/ArFVZO3LZN (21 minutes ago)

@The_RiotACT @The_RiotACT
Buyers are flooding the Canberra housing market, pushing prices to record highs. Find out why and what's hot https://t.co/PqxXutRy0V (2 hours ago)

@The_RiotACT @The_RiotACT
Ten local companies are polishing their pitches for Canberra Innovation Network's annual Innovation Showcase. Here's how you can get involved https://t.co/poNkIicZBH (4 hours ago)