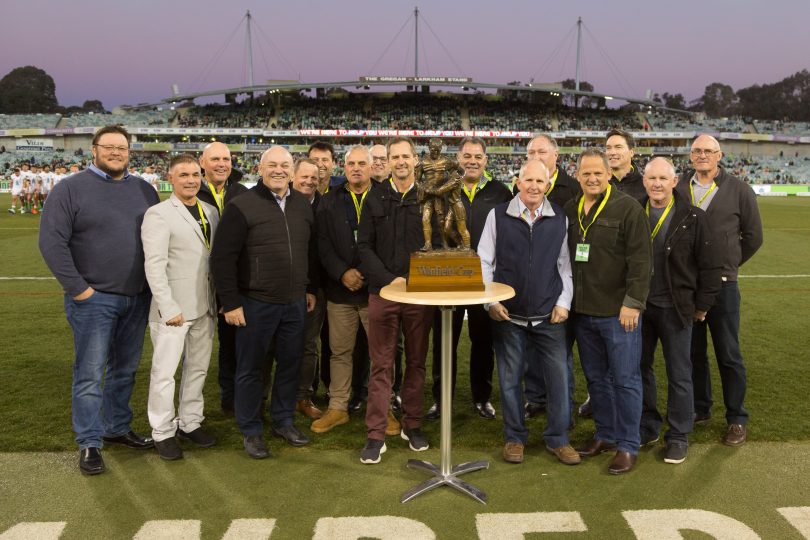 The 1989 team at this year’s reunion. Photo: Ben Southall.

I just watched a replay of the 1989 grand final against the Balmain Tigers.

Who could forget this most amazing game, etched in the minds or all Raiders fans? The self-belief and team spirit was incredible.

Watching the current Raiders players mix with the team from 1989 at the Hall of Fame gala ball was a privilege. The chemistry between the former and current players was palpable. Maybe the current team also sat down and watched the 1989 grand final replay and were inspired.

From the distance of time, the side of ‘89 is often described as invincible because of the standing that has been achieved by numerous Raiders players from that side post 1989. But let’s not forget the Raiders of ‘89 were far from invincible and only just scraped into the finals, which makes their feats even more memorable.

So are there similarities between the 1989 team and the current Raiders team?

Let’s compare the players from both eras at the same time in their careers.

While many in that Raiders team of 1989 went on to become legends in the game, with several remaining as the biggest names in the sport, at the time of winning the club’s first premiership Canberra had eight players in their line-up who had played representative football. By representative football I am talking about Origin for NSW or Queensland and tests for either Australia or New Zealand.

Gary Belcher, Mal Meninga, John Ferguson, Laurie Daley, Bradley Clyde, Gary Coyne and Glenn Lazarus had all played Origin and in some cases test football for Australia, while Brent Todd was a New Zealand test representative. All eight were representative players prior to the 1989 Grand Final victory.

Ricky Stuart and Steve Walters didn’t make their origin or Australian debuts until 1990.

In the current Raiders team there are also eight players who have played either Origin, or test football for Australia, New Zealand and England. Jordan Rapana and Joe Tapine are New Zealand internationals, Nick Cotric and Jack Wighton have played Origin this year, while Josh Papalii has played both tests for Australia and Origin for Queensland.

It is hard to compare teams and players from different eras with every player in that 1989 team etched in folklore, and comparisons become clouded by the status the players went on to achieve. But as they were being interviewed at the Hall of Fame dinner a number of the players from 1989 commented on the similarities between the premiership team and the current side.

Laurie Daley indicated that he hadn’t been this excited by a Raiders team for a number of years.

Ricky Stuart has done an incredible job in reminding the current players of the history created by that team of 1989, with those former players no longer simply legends of the past but mentors to the team of 2019. What he has done is create in the minds of the players that anything is possible, and that this current team has the potential to generate their own piece of history.

Sandra Stevenson - 9 minutes ago
Sylvana Whyte Good idea! View
Jennifer Blood - 2 hours ago
Very interesting explanation of how the buildings were constructed and leased, leading to the lack of uniform upkeep we see t... View
Iaian Ross - 4 hours ago
"To have time out, she would walk to Manuka Pool for a swim and walk back in time to be ready to cook the first breakfasts of... View
Lifestyle 8

Sarah Jane - 30 minutes ago
Shannon a day trip? View
Maya123 - 4 hours ago
Some gorgeous things there, but there are only so many cushions, vases, etc, you can have, before it becomes clutter. View
Rowan Bergin - 4 hours ago
I went back there last Wednesday and bought a ring for my daughter s birthday View
News 24