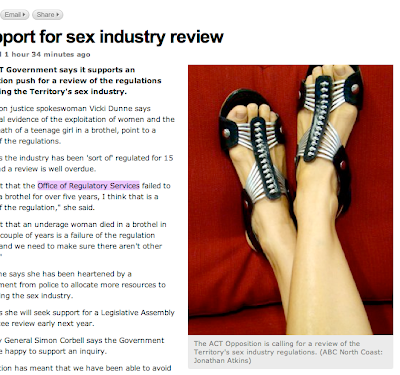 The ABC informs us that both the major parties are supporting a review of the sex industry’s regulatory framework.

Don’t mistake this for action, they’re talking about doing it next year which will give the Office of Regulatory Services plenty of time to do some well-flagged inspections so they can be sure of not finding anything that might upset them, us, or the MLAs.

With no inspections in five years and a dead teenager turning up in a brothel one has to wonder what else the ORS is miserably failing at?

(One is also amused by the ABC’s choice of stock photo for this story, are all women who wear strappy shoes prostitutes?)

I’m mystified as to why the ACT claims to regulate brothels. I suspect it is only so that there is no need to police so called ‘illegal’ brothels. But in reality there is no substance to their ‘regulation’ at all, beyond filling out a form.

What is it now… June 2010? Wasn’t the Office she refers to formed circa November 2006? As they didn’t exist four years ago (let alone for over five years) I would ask Ms Dunne “Political mileage much love?”

The fact that she has quite obviously never read the legislation (see previous comment from CanberraCreative in this post http://the-riotact.com/?p=22123) merely reinforces a lack of interest in her portfolio (unless political mileage can be made) as well as a lack of political credibility.

Please Ms Dunne, if you intend to represent Canberrans at some stage can I suggest you familiarise yourself with some of the legislation we live under?

Do you have something in particular against the Office of Regulatory Services? You seem to bash them at every opportunity. I don’t disagree that Public Servants aren’t the most efficient lot as a general rule (personally I find the ATO wearing) but this looks almost like a vendetta, feel like filling in the general populace?

“Don’t mistake this for action, they’re talking about doing it next year which will give the Office of Regulatory Services plenty of time to do some well-flagged inspections so they can be sure of not finding anything that might upset them, us, or the MLAs.”

Such as finding an MLA using, owning or working a 2nd job at one??

And no painted toenails?

hot fluro pink would set the look off !

Why is there no cute and negotiable option? 😉

I’m disappointed that the lass in the photo is not wearing fishnets or FM boots. Although they seem to be mainstream fashion these days, not only the atire of ladi3es of the night.

hopefully the review will produce a result which is beneficial to the working conditions of the ladies and men in our local brothels and not just produce a report that the Minister can sit on for a year.

And no painted toenails?

Those shoes are fugly.

Doesn’t mean that the person wearing them isn’t cute (or negotiable).

Those shoes are fugly.

Steven Campbell - 43 minutes ago
Reducing posted speed limit is simply government’s way of running away from their responsibilities. Laws are only as effect... View
Opinion 11

Capital Retro - 49 minutes ago
Nailed it. View
thebscaller - 9 hours ago
So what have you achieved other than self promotion? A message from someone saying that the only hope they have is for a libe... View
Mark Parton MLA - 12 hours ago
Thanks for constructively engaging, but I would reject the characterization of my advocacy for Alex as a media stunt. And I w... View
Opinion 71

Capital Retro - 50 minutes ago
Spot on. What goes on behind the scenes is usually at odds with the "clean & green" propaganda we hear. Just like a wind "far... View
George Watling - 9 hours ago
These things also generate vast amounts of e-waste and carbon pollution. Studies show they last about 9 months before they ar... View
Business 21

Neil Thompson - 55 minutes ago
Andrew Turnbull, great bloke to get on the piss with as well. View
Trevor Hicks - 1 hour ago
About time 👍 View
Jess Puddick - 3 hours ago
Kimberley love it, so excited for it to be restored! View
Opinion 11

Shane Westmore - 9 hours ago
Absolutely. There’s people voting now who are completely misinformed about anything going on in this country & waste their... View
Nada Krstin - 11 hours ago
oops, meant to say, cannot have it one way! :)... View
Nada Krstin - 11 hours ago
No. And if you think they are mature enough to vote at 16 or 17, then they should be tried for any crimes as adults as well,... View
Opinion 94

George Watling - 9 hours ago
Marc Edwards Spot on Marc. The best way to deal with congestion is decentralize workplaces. If everyone is travelling to a ce... View
Property 1

George Watling - 10 hours ago
Sadly when and if the governments changes to the residential zoning laws come through this place will be torn down and it blo... View
News 11

ACT resident - 10 hours ago
It is unrealistic for the Canberra community to pay for a company’s poor commercial decisions. The risks for CRS, newly reg... View
HiddenDragon - 14 hours ago
"...Capital Recycling Solutions, is in early talks with the government about its costs. It is hoping for an agreeable settlem... View
Lifestyle 1

Kat Lindbeck - 11 hours ago
Lucy that’s great. Best of luck for the future and an International career View
Community 8

@The_RiotACT @The_RiotACT
Captains Flat Road will get a much-needed $10 million upgrade over the next four years as part of a capital works program in the Queanbeyan-Palerang area https://t.co/2zPIjg1tc5 (29 minutes ago)