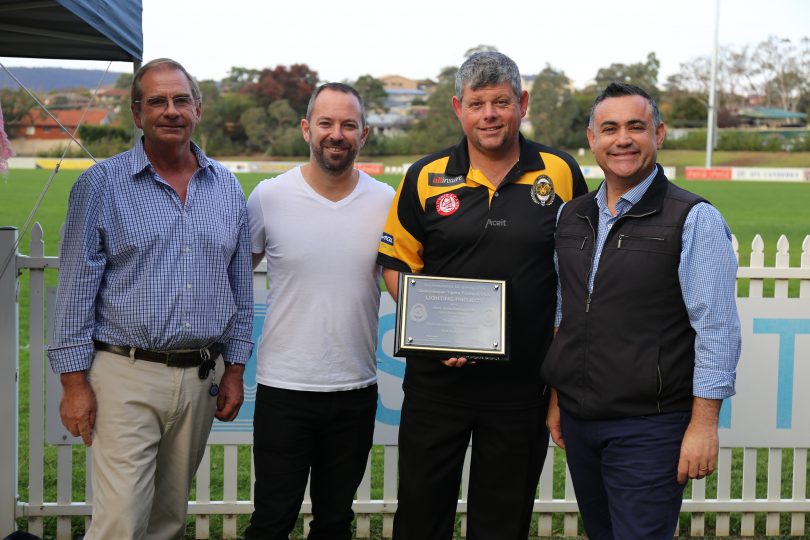 The Queanbeyan Tigers AFL season couldn’t have gotten off to a better start, with a 47-point win made all the better with the official turning on of the brand new lights at the Tigers’ home ground, Allinsure Park.

Allinsure Park was lit up with upgraded lights after a $450,000 investment by the NSW Government. The field had been fitted with old lights that were basic training standard lights since the early 80s.

Former General Manager of Football Operations at Queanbeyan Tigers Michael Goiser said the lights were unsuitable for night matches and the club had been trying to get the lights upgraded for some time.

Mr Goiser oversaw the sourcing of the funding and worked with the Queanbeyan Council to coordinate the construction of the lights.

Mr Gioser said the steady growth in participation rates across junior and senior level required the lights to be upgraded.

“With the growth of football, particularly around women’s football, there is a lot more pressure on oval availability, so simply having lights allows the ground to be used for extended hours,” he said.

“We were able to field another women’s’ team this year so now we have two senior women’s grades and three men’s grades so we have a lot of games happening each week.”

“Nearly every weekend, we will have one of those grades playing at night time for quite a large part of the season.”

NSW Deputy Premier John Barilaro joined the club for the season launch and said it was great to see the investment finalised for the club to enjoy.

“The Tigers are an integral part of our community here in Queanbeyan and they have been around for almost 100 years,” he said.

“This is a huge investment in one of our most-loved local clubs and it is clear that the NSW Government is committed to supporting local sport here in the Monaro.”

The member for Monaro paid tribute to the football club’s executive members who were the driving force behind the new lights.

“The lighting project has been driven by the club’s executive members, who have been dedicated in their work to provide the best facilities for the club and its players,” he said.

“The Queanbeyan Tigers Club rally around whenever something needs to be done or funded, and it was great to be able to help them out with $450,000 for this major project.”

Michael Hansby - 2 minutes ago
I believe the term is 'shake and bake'. View
HiddenDragon - 16 hours ago
"....but we’re not really in a position to think properly about what those suburbs are going to be like 15 to 20 years down... View
Robin Dearlove - 17 hours ago
Yesssss! View
Sport 6

Bri Travalos - 24 minutes ago
Being at OBGA when Trevor Gerling scored the goal in overtime in the 2018 grand final. Best atmosphere at an away game I’ve... View
John Harriott - 3 hours ago
Being on the edge of my seat in melbourne during overtime and finally seeing cbr lift the goodall cup View
Chris Kubara - 4 hours ago
My Hockey involvement started quite a few years ago firstly as an unpaid chauffeur, then Team Manager, Junior Coach and then... View
News 40

Julie Maynard - 3 hours ago
Ursula Gamal we like to think we are developed! View
Sue Harvey - 5 hours ago
It would be nice to have a bus service to the railway station that actually catered to the train timetables. View
Ursula Gamal - 5 hours ago
We are in the 2020s. High speed rail everywhere but Australia...and we are a 'developed' country🤣🤣... View
Property 18

Ian Lindgren - 5 hours ago
Thank you Lucas, we enjoy supporting you. We have a lot of new initiatives coming this year.... View
News 22

Carole Ford - 12 hours ago
About bloody time, there are morons driving and looking at phones everyday in the hundreds. I hope that fining them helps sto... View
Food & Wine 19

Rudy Castillo - 17 hours ago
No flights to New York ? View
show more show less
*Results are based on activity within last 7 days

UPDATED 4:00 pm A lockdown at Canberra Grammar School has been lifted after a threatening email was sent to the school...
News 40

The 1.7 kilometre extension of light rail from Alinga Street to Commonwealth Park via London Circuit will be wire-free, in...
News 40

@The_RiotACT @The_RiotACT
The latest health staff culture survey has sparked a furious war of words between the government and the Opposition, which has been accused of relentless negativity. See the issues staff remain concerned about and what hospital management is doing about it https://t.co/BjyXZ69Era (21 minutes ago)

@The_RiotACT @The_RiotACT
The new Woden CIT campus development could be up to 16 storeys high, and include apartments and an indoor sports facility as part of mixed-use development, according the design contract. Check out the details https://t.co/AIUkPznL8O (2 hours ago)