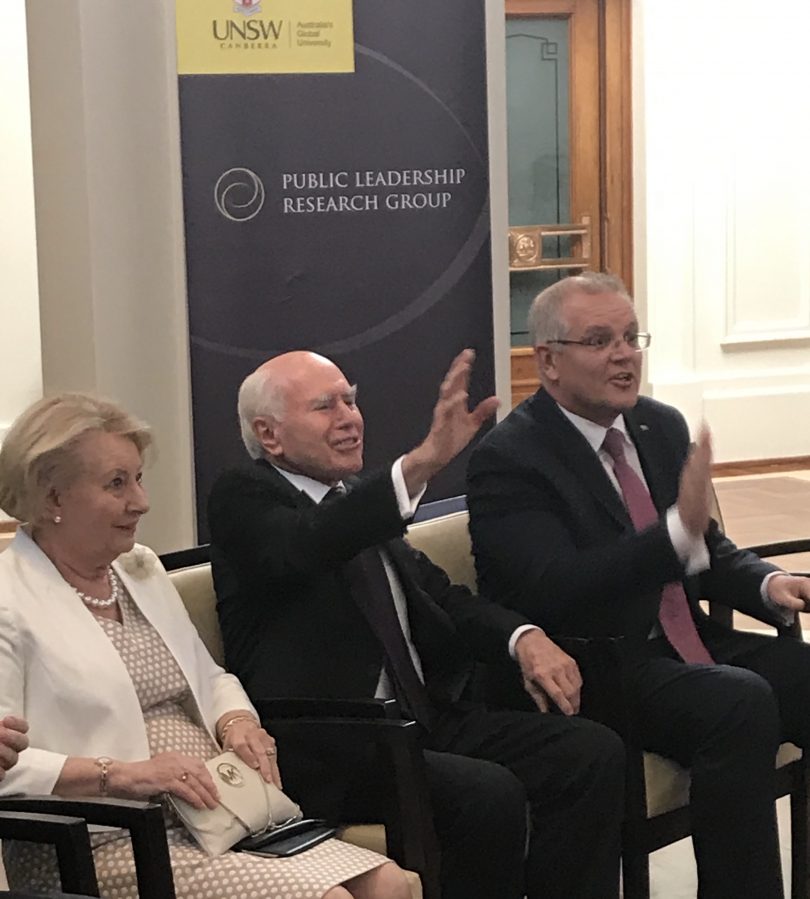 Not only lauded as a hero for modern Liberals, it seems that John Howard is also a true believer, at least to the extent that he and Scott Morrison both think that the government will win the next Federal election. It was very much an event for true believers of all kinds this week as the Howard Library at the Museum of Australian Democracy was opened by the Prime Minister.

In a speech that included Biblical references to the Good Shepherd, to Joseph laying up stores for the future, and even invoked St Peter and the rock upon which a broad church could be built, Mr Morrison thanked the former PM for his ongoing support.

Mr Howard responded with a ringing endorsement of Mr Morrison’s electoral prospects. “Scott, I thank you for your energy and commitment and problem-solving pragmatism. You will have my total undivided support. I believe in you, I believe in the future of the Coalition. I believe that victory can be achieved under your leadership and that you hold the great values of Menzies and the broad church very dear,” he said.

Three generations of the Howard family including the latest addition, six-week-old Winston, were present for the opening attended by many of the Liberal old guard, among them former ministers Philip Ruddock and John Sharp and one of Mr Howard’s closest associates Tony Nutt.

“This is history, this building,” Mr Howard said, “I first came here in 1974 after the Whitlam-Snedden election, the first of those two double dissolutions. People say to me now that politics is a bit active. I say it was pretty active between 1974 and November 1975! History is important to any nation. We should understand and interpret it and contest it where appropriate but we should never shun it.”

The Library becomes one of a handful of institutions devoted to the legacy of significant Australian leaders. It will be directed by Professor Tom Frame and is fittingly a collaboration with the University of NSW at ADFA, Mr Howard said, given the level of overseas conflict during his term and his great respect for Australian serving men and women.

While there are many documents concerning matters of state and memorabilia of major political moments, he also noted deprecatingly that even the Rubbery Figures “have been exhibited in a very bipartisan fashion…. there is material that is mildly critical, to say the least, and that is how it should be”.

In his opening remarks, the Prime Minister dwelt on the significant challenges Mr Howard had faced, from the Port Arthur Massacre and the subsequent fight for “comprehensive gun reforms that are the envy of the world” to the challenges of “keeping us prosperous in a dynamic and changing world.”

“Through the tumult, Lazarus emerged with that triple bypass, cannier, sturdier and even more resilient,” he said. “I’m sure it was exhausting, but warriors see no shame in fighting to the end. You fight for what you stand for until the bell rings.”

The Library’s personal papers and official records total 150 metres of shelf space from Mr Howard’s political career, while the exhibition includes the Prime Minister’s desk, APEC costumes, advertising from both sides of politics and gifts from world leaders.

“What makes this Library unique is its non-partisan and apolitical character. Our objective is to develop the Howard Library as a resource for public leadership studies, how the Howard Government promoted the contest of ideas and publish work that objectively assesses the Coalition’s performance in power,” Professor Frame said.

Daryl Karp, Director of the Museum of Australian Democracy (MoAD), says the Museum is “delighted to share the spiritual home of Australian democracy, Old Parliament House, with the Howard Library.”

“In this iconic heritage building, MoAD tells the story of Australia’s journey to becoming one of the world’s most vibrant and multicultural democratic nations and the collection housed in the library will help convey that narrative to our visitors.”

Ever hear that war cry “solidarity is forever”? I don’t think the Liberals are part of that one.

Typical- focusing on the past and not keeping their eye on the future. Past glories - a bit like England.

Di Green - 25 minutes ago
I so enjoy these gardens View
Vee Bee - 3 hours ago
We miss it so much :( View
Community 28

Sarah Handley - 33 minutes ago
Meredyth Wendel how will the cygnets cope lol View
nobody - 1 hour ago
Who in their right mind thinks all 10,000 plastic ducks will be recovered? View
JS9 - 3 hours ago
Where does it suggest anywhere they are just going to be left to wander down the river after the race is over? View
News 12

JC - 39 minutes ago
Correct death rate has not been the same as the flu. For one reason and one reason only and that is because we have restricti... View
JC - 45 minutes ago
It’s been standard practice through the pandemic. Rightly or wrongly. View
Maya123 - 59 minutes ago
Twas always the way. I have seen an old death certificate where a long term medical condition was mentioned, but the cause of... View
Opinion 45

yolo2014 - 1 hour ago
No offence to Penrith as it is always a great game playing against them but the reason they have been removed from the Sydney... View
Ben Rabaud - 2 hours ago
Scott Neil, the RSL have been our major sponsor for the last few years. View
Ben Rabaud - 2 hours ago
Jay Annabel, as a (recent) old Emu, I can tell you we've always loved the travel. View
News 18