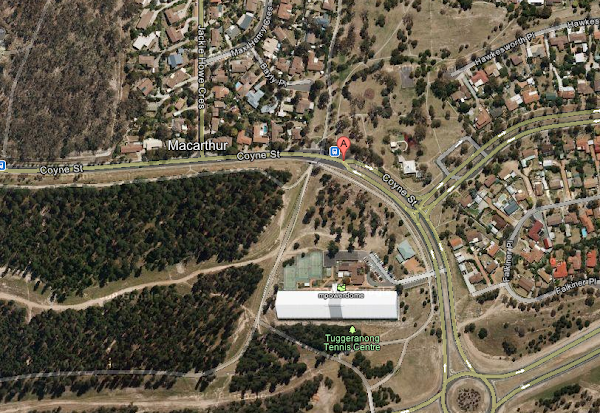 With Liberals hopes of victory in October predicated on winning three seats in Tuggeranong (the seat of Brindabella) it’s no surprise to see Zed Seselja getting excited by rubbish, roads, and rates in parts southern.

In particular Zed would like speed humps on Coyne Street:

The Canberra Liberals will today call on the ACT Labor Government to install traffic calming measures on Coyne Street in Macarthur. ACT Opposition Leader Zed Seselja said today that many residents have serious concerns about the number of accidents on the road and the government’s inaction on the issue.

“I have received many representations from residents in the area and as someone who uses the road, I can personally say that it’s dangerous,” Mr Seselja said.

“It’s an important road for families with children attending local schools, and I understand children have been involved in some of the many accidents.

“That’s why today we’re representing the community and calling on the government to install traffic calming measures, such as speed bumps, by the 7th of June.

I’d ask for statistics on accidents on that road, and the complaints received, but, well…

I would terminate the road shortly after Jackie Howe Crescent. There is a “green corridor” coming down the ridge line parallel to Jackie Howe Crescent which currently ends with a stone retaining wall (the corridor includes that green patch above the label for “Coyne Street” in the first map above) which I would stretch over the portion of road to join with the pine forest on the other side.

With less Gilmore traffic using Coyne street as a connecting route to Woden, there will be far less traffic on Coyne street in the first place. That traffic would had to continue down Bugden Avenue to Kellet Street, use Erindale Drive/Ashley Drive, or use Hindmarsh Drive / Mugga Lane and the Monaro Highway.

Another option could be to resume all the land along Coyne Street, and between Coyne/Bugden intersection over to Bugden/Partridge intersection and build a new major road through Fadden where the footpath is currently running.

Speed bumps are not going to help anyone.

Sounds good to me, although I should think the NIMBYs of Macarthur should be at the very back of the queue for getting anything done for them after having managed to con Zed into sabotaging the gas-fired power plant + data centre next door to the tip on account of their spurious complaints.

This is a 60 road and always has been busy. In the 15 years I have been driving down it it doesn’t seem any more dangerous today.

When chicanes were installed on Vansittart Crescent in Kambah many years ago, it was for similar reasons, a few minor accidents. Within a day or two of these chicanes being installed, an elderly lady was travelling along the road at the speed limit, hit a chicane, flipped her car and died at the scene. What was once a ‘potentially dangerous’ road with some people reporting speeding, within days of being ‘fixed’ was turned from ‘potentially dangerous’ into a ‘fatality causing’ road.

The road has now turned into a stretch where drivers often attempt to see how fast they can go and still make it through the calming devices.

Cooby Pedy - 15 minutes ago
mazzie agree with you 100 percent in the .meantime these bloody climate alarmist keep spreading there false BS about renewabl... View
Peter Kline - 2 hours ago
Tony Armstrong great news. View
Mazzie Woodward - 8 hours ago
We don’t have a working hospital and they are building a giant battery 🔋 does anyone else find this utterly ridiculous? View
News 161