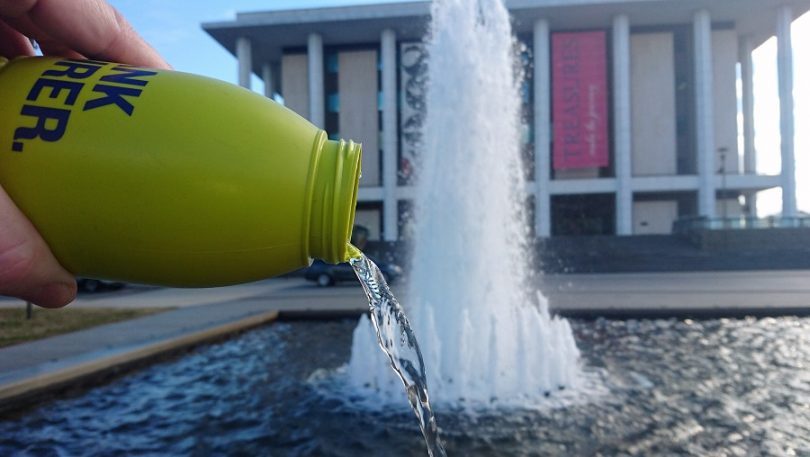 Water confusion – My spirits were slightly dampened when I was told to remove my plastic water bottle from the National Library to protect its priceless collections. Photo: Brad Watts.

I was slightly confused when a security guard asked me to remove my plastic water bottle from the National Library of Australia (NLA) recently.

Sitting quietly at a desk – surrounded by many other people who had similar water bottles – I was doing some work-related research on my laptop in the Main Reading Room when the guard approached me.

“Excuse me sir, but you must remove your water bottle immediately,” said the uniformed man in a stern voice.

Slightly taken aback, I politely inquired about why I had to get rid of my plastic sports bottle, which only contained regular Canberra tap water?

“It’s not see through and it must be removed, that’s our policy,” he said with his arms folded.

Unsure of exactly why I had been singled-out and but not wanting to cause a scene in the serene surroundings, I complied with his request and nonchalantly left the reading area.

However as my spirits were slightly dampened, I decided to investigate further and spoke with another security guard near the main entrance.

I mentioned that I had not received any information from his colleague and was unclear about the NLA’s liquids policy.

“I guess someone should have directed you to the signs,” he said, pointing downstairs to the basement area of the Library.

Sure enough, I discovered some small signs about conditions of entry near public lockers, saying food and drinks must be stored in a locker but “transparent water bottles were permitted”. 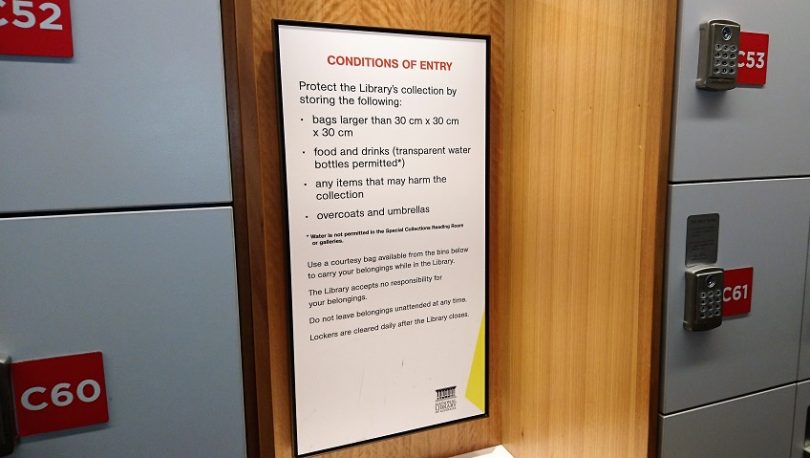 The NLA’s signs about conditions of entry say food and drinks must stored but “transparent water bottles” are okay. Photo: Brad Watts.

This was now making more sense. The basement signs said Library patrons should also use a clear “courtesy bag … to carry your belongings while in the Library.” This rule was designed to protect theft from the historic cultural institution.

On further investigation later that day, I found the Library’s Code of Conduct online, which says: “Pure water in transparent bottles with a tight lid may be brought into the Main Reading Room and the Asian Collections Reading Room only. Water bottles are not to be used or handled in a way that could potentially damage collection material.”

This made me think about how Canberra’s leading national cultural institutions – which are major tourist destinations – communicate their safety and entry policies with locals and visitors, including for bags, food, drinks and personal belongings.

There may be an opportunity to better educate staff and security guards to be more specific and friendlier when enforcing the rules.

As a suggestion, institutions could maybe provide fact sheets to visitors when they arrive or have clearly visible signage in the main entrance areas and foyers. 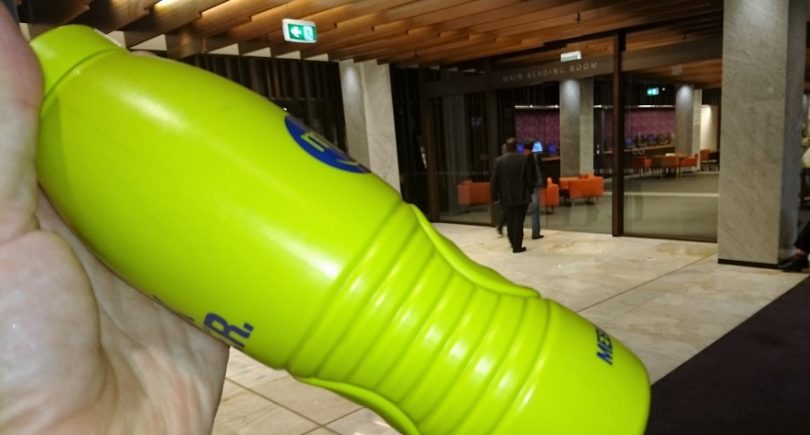 Clearer and more prominent signage could be used to highlight entry policies for institutions, including in the NLA’s Main Reading Room. Photo: Brad Watts.

While I understand the need for the NLA – which is one of Canberra’s grandest landmarks – to have strict rules for liquids not be splashed on its historic collections, there may be an opportunity for greater “transparency” with its policies and better signage. Having larger and more prominent signs throughout the Library would certainly help with this issue, which I am sure would also benefit people who are vision-impaired.

If these changes were made, I will certainly drink to that … with my new transparent water bottle!

Do you think entry and security policies could be better communicated to people by Canberra’s cultural institutions?

My library has clear “no food or drinks allowed “ signage .

Last time I looked there were many highly volatile liquids the look like water, but is feel safer now that is in a clear container.

I think Brad needs to go to the library more often 😂

Some libraries dont allow water bottles at all.There are signs indicating what you can and can't take in. Plus it's here on the website http://www.nla.gov.au/reading-rooms/main

I study in the NLA and saw the signs the first time I went. I have never used anything except a transparent water bottle. I don’t think it is as hard as you seem to think.

I think the rules are pretty clear and I’ve never known anyone else to have a problem with what is quite fair. Sounds like you’re just having a whinge because you were pulled up about it. An ‘information sheet to be handed to patrons’, seriously??

Ironically, there is a fact sheet about water bottles. Personally I think it should have one sentence on it that says 'the national collection is more important then your water bottle'.

Sorry, but I use the NLA reading room and its pretty obvious what the rules are and why. It sounds like you are being obtuse. You can also get in trouble for putting your feet up on the furniture. If you do not like the rules, then studying in the basement is more casual....but no access to books.

Susana Di Donna - 7 hours ago
Monica they are doing this. View
Monica Muschialli - 9 hours ago
John Boland agree John in Victoria they have hard rubbish kerbside pick up about time ACT introduce this service View
Property 4

Josh Fear - 8 hours ago
When was the last time a real estate agent was realistic about the state of the market...? View
News 32

Ben Appleton - 9 hours ago
Shayne Borger simple. Don’t do the wrong thing 🤷🏻‍♂️ View
John Dillon - 12 hours ago
That's what I mean, then our CM will come out with the standard "we will let market forces decide ". Not for rates and taxes,... View
Chrissto Melba - 12 hours ago
The High Court of Australia today decided that (according to them) juries are too stupid to understand what is put in front o... View
News 24

Bill Gemmell - 9 hours ago
It is a nice idea which I fully support. However, it is called a tax-transfer system for a reason. The tax system funds the $... View
Alan Carlyle - 13 hours ago
This is seriously worth considering for the simple reason that the Australia (and the World) is becoming a far more dynamic a... View
News 31

Paul Leins - 9 hours ago
Folks are more than welcome to upgrade if they so choose, but the simple fact of the matter is that a chromebook is excellent... View
Karen Feng - 13 hours ago
Elliot Maroney-O'Brien You're making the assumption I do all my work on 12.3" screen. I dont recommend doing all your work lo... View
Elliot Maroney-O'Brien - 13 hours ago
Karen Feng Too small as a laptop really. 12 (or 12.3 inch if you really want to be pedantic) is too small to work decently wi... View
Property 66

Alex Makedonsky - 9 hours ago
These are very divisive comments.. he's not a leader. A true leader (think Churchill) could have choosen other words to unite... View
News 1

Mark Walton - 12 hours ago
No problems having free press or the idea that hard questions cannot be asked. But surely the most important question, is who... View
Daniel Duncan - 13 hours ago
I will stand up for a free press. Will they stand by us with our free speech... so far nope. View
Community 6

@The_RiotACT @The_RiotACT
A little more than half of you thought the West Basin land swap, quietly engineered by the government and NCA, was not a good idea. But how do you feel about deferring or reducing rent during the COVID-19 crisis? https://t.co/FDjJS5UeLe (8 hours ago)

@The_RiotACT @The_RiotACT
At a time when Canberra's social services are providing critical support, many on the frontline are absorbing significant spikes in demand https://t.co/I8YIV7wufa (10 hours ago)