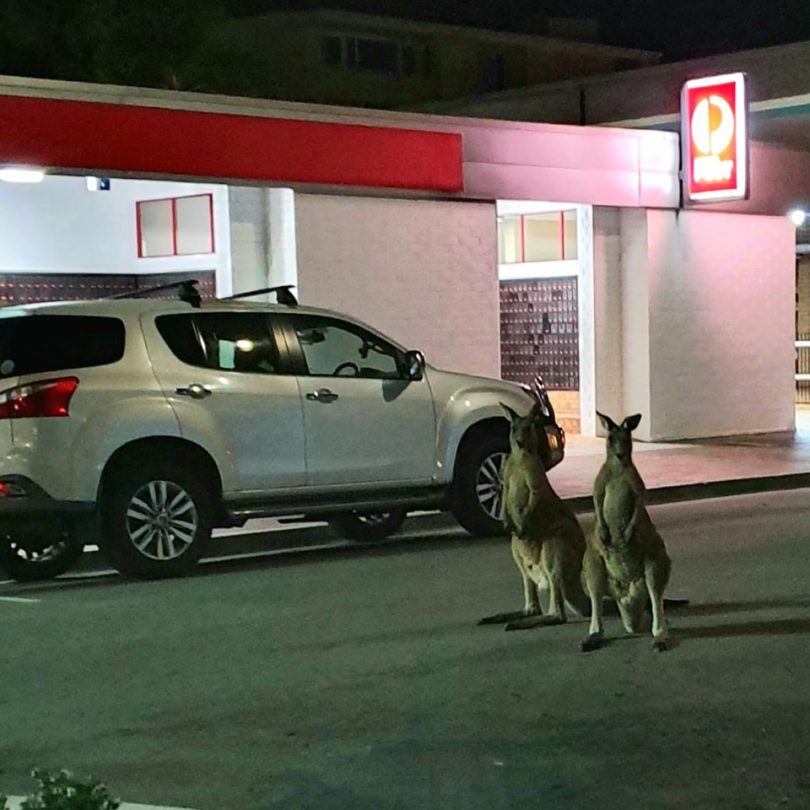 It was, in many ways, the quintessential Canberra experience for everyone concerned. Unfortunately.

One night last week, I was driving along Adelaide Avenue between Yarralumla and an exhibition launch in Griffith at about 6:15 pm. Traffic was moderately heavy and flowing quickly, not far from the Lodge.

Parliament House was lit up, the flagpole outlined against the dark blue sky, as our lawmakers and public servants toiled to determine the course of the nation a minute’s drive away.

And then I hit a kangaroo.

It was so quick that I had no idea what was happening – a flash across the front of the car, a thud and then an animal flying through the air. Initially, I thought it was a dog. The momentum wasn’t enough to stop me and I drove on for a few seconds, in shock.

The roo had struck a glancing blow on the right-hand side of the car, knocking out the glass from the driver’s lights, smashing the grille and denting the bonnet.

I pulled over, completely flummoxed. I walked back to investigate what had happened to the kangaroo, but the traffic was moving fast. As far as I could see across three lanes of flying cars, the roo was comprehensively done for. I rang Access Canberra to report it, for the sake of both other motorists’ safety and the animal’s welfare.

The van arrived with flashing lights a few minutes later so I knew, at least, that the roo was off the road and not suffering. The car was perfectly driveable and I was expected at my next event, so after briefly wondering what to do, I carried on and got the next job done.

I remembered Brindabella MLA and fellow former radio presenter Mark Parton telling me years ago that he’d hit two kangaroos in his life and both of them were on Northbourne Avenue. This is truly the Bush Capital, I thought. I’m sure this doesn’t happen in Westminster or Washington and probably not even in Wellington.

The NRMA says that winter is the riskiest time for crashes involving animals, and 90 per cent of animal-related insurance claims arise from incidents with kangaroos. Brake, but don’t swerve if you are on a crash course with a kangaroo, as you might cause a collision with another vehicle. Dawn and dusk are the times when most animals are about, and if you see signs advising animals may be present, then slow down.

That’s all well and good, and wise advice for anyone on a country road. But in multiple lanes of peak hour traffic next to the Prime Minister’s official residence?

Well, yes. ACT Parks and Conservation says that the south-east region has some of the country’s highest recorded densities of eastern grey kangaroos. According to police, Goulburn, Yass, Canberra and Cooma are high danger zones for kangaroo collisions. Parks and Conservation’s hotspots include almost every major arterial road in the Territory.

If you do have the misfortune to hit a roo, don’t try to move it yourself. You risk being injured both by the kangaroo and by traffic. Instead, call Access Canberra immediately on 13 22 81.

Wildlife ACT, of which I’m a patron, advises that for anything smaller than kangaroos and wombats (except snakes) you can ring their hotline on 0432 300 033 for advice. In surrounding NSW, you can call Wildcare Queanbeyan on 6299 1966. You can also call the RSPCA during business hours on (02) 6287 8100.

As for me, a friend advised a medicinal tot of whisky, but I settled for a cup of strong tea. I felt a bit shaken and distressed for the poor old roo, in and out of life in one brief moment.

Was it a victim of our growing population, of dry times in the bush or of proliferating species in the city? Who knows, but I devoutly wished we were both safe, sound and undamaged.

Have you hit a kangaroo in the city?

Yes. A few years ago hit a kangaroo on State Circle, City-bound at about 6pm.

Driving a bit slower may reduce risk many folds.

In Lyneham. It’s a government failure and insurance for this doesn’t come with the rego - I learnt it the hardway.

Melanie Gibbons We almost hit one coming home tonight around the corner from us!

Melanie Gibbons We almost hit one coming home tonight around the corner from us!

With the drought hitting us hard, the carnage of animals hit by cars and trucks between Canberra and Michelago is now a true horror. Driving home last night, on just that short piece of road, there were 4 cars off the road with hazard lights smashed by roo’s but the dead and dying roo’s and wombats and the blood on the road was just sicking. I help when I can to get the animals off the road but just slowing down to 80 makes it so much easier to avoid them.

I know we are all in a hurry to get home, but would reducing the speed to 80 after dark and adding it to the big bright glowing road signs for that small stretch of road be a real hassle, just until it rains and the animals are not forced to eat and die by our roads.

Well it’s no wonder when the poor things have nothing to eat and the grass on capital hill hasn’t missed a drop of water in over 30 years.

Hit a roo... 4-5 months of physio for whiplash & 6 weeks later catapulted into chronic migraines. Unlikely to be a coincidence. 🙈

Protect the wildlife sure... Because it'll protect human beings too!!!

We had one jump OVER our car at the intersection if Springvale and Coulter Drives, Weetangera. Hind claws left scratches on the roof rack.

Last time I drove down Mugga Way at midnight, I passed about a dozen kangaroos. I now use Canberra Avenue after dark; it's safer. I see kangaroos whenever I drive near bush on the edge of Canberra about dusk. They are so common.

I hit one on Sulwood dr when I lived that side, have seen plenty around Deakin now I’m this side.

I’ve spent more than fifty years on the road, most of it full time, over a good cross section of the country, and I’ve only ever seen ONE kangaroo, c’81, when it just missed us near Hartley Vale, Blue Mountains area.

One ran Into my nieces car on flemington road last night. Both are ok

Just last night at around 7:30pm a poor urban Kangaroo was hit by light rail somewhere between the last two stops in Gungahlin.

I’m always scanning both verges of roads I ride my bike on out in the adjacent bush areas around our city. And hold my breath, incl. thru’ the nose, until I’m well up wind of the carcasses ...

A few years ago a huge one bounded out from the grounds of Parliament house onto the road and clipped my car's rear vision mirror on my drive to work. Scared the bejeezus out of me that's for sure 😨

Lynne Staunton - 8 minutes ago
Julie Arnold but at least when the next big fire comes through that way there us now a decent fire break to protect the inner... View
Linda Johnston - 3 hours ago
Nick Anderson I think it goes back earlier than Forde. I remember going into parts of Tuggeranong and having absolutely no id... View
Dörte Conroy - 3 hours ago
Every new dwelling should be solar passive too! View
Lifestyle 8

Stephen Saunders - 37 minutes ago
As I write, common sense is winning this one, 63-37. When useless NCA couldn't help us on the ASIO Building, Brindabella Park... View
Opinion 82

James Balean - 2 hours ago
Jerome Boland if somebody wanted to put a tram track through your property, you’d pay for them to do so? View
Darren Scrivener - 14 hours ago
What a bloody waste a money View
Property 1

Rauny Worm - 4 hours ago
Yes we can View
News 5

Adrien Hopkins - 11 hours ago
I called in to get a coffee yesterday but you had closed early View
Rob - 12 hours ago
Any place frequented by a smiling dog has to be good! View
Robin Tennant-Wood - 16 hours ago
I hope, in the interests of animal welfare, they also have a range of non-meat options on the menu. :-) View
Sport 3

Michelle Thiele - 12 hours ago
RIP, you were an incredible man... View
George Lemon - 13 hours ago
A Queanbeyan legend who dreamed Green. View
News 189

astro2 - 13 hours ago
it's very clear from the usage of R1 that the demand is there and the growth statistics of Gungahlin area require more than j... View
Business 1

Opposition leader Alistair Coe has asked Canberrans to have higher expectations ahead of this year’s election following the Government’s budget...
Opinion 82

The 1.7 kilometre extension of light rail from Alinga Street to Commonwealth Park via London Circuit will be wire-free, in...
News 61

Chief Minister Andrew Barr has criticised the terms of reference of the Bushfire Royal Commission for not giving a higher...
News 28

The bikie gang threat in the ACT is exaggerated, according to a new report released yesterday by Attorney-General Gordon Ramsay which...
Opinion 29

As the ACT Government prepares for Stage 2 of light rail, fasten your seatbelts because it promises to be a...
Opinion 20

Would you eat a Canberra kangaroo?

@The_RiotACT @The_RiotACT
ACT motorists who use a mobile phone while driving could soon have an extra deterrent, with ACT Gov investigating the introduction of mobile phone detection cameras https://t.co/7dDIpnuYjs (53 minutes ago)

@The_RiotACT @The_RiotACT
Brumbies coach Dan McKellar is right, argues Tim Gavel: We should be focusing on the positives in rugby https://t.co/BNWLwEe7rX (3 hours ago)