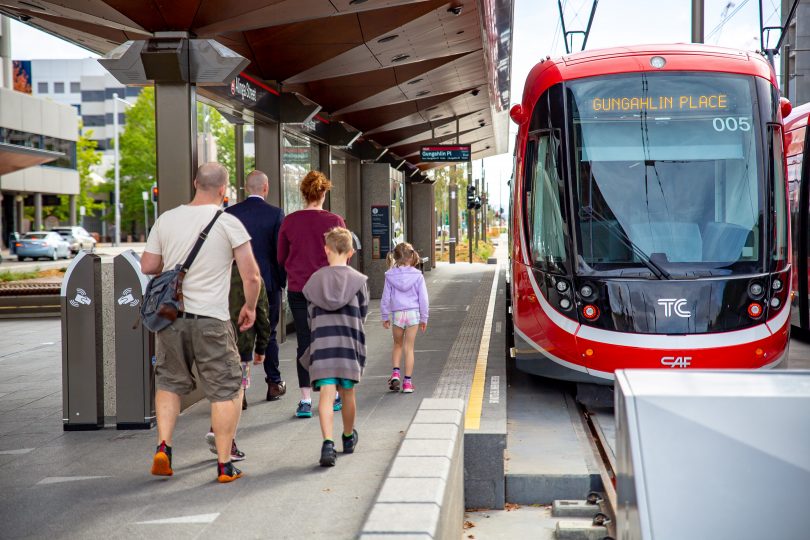 The final cost of building light rail Stage 1 between the city and Gungahlin has come in at $675 million – under budget by $32 million on the contract and $109 million on the original business case.

The contract with Canberra Metro for design and construction with a 2018 start was worth $707 million, compared with the business case estimate of $783 million and a 2019 start.

Stage 1 was due to be delivered by the end of December 2018 but did not start operating until Easter, four months later.

Chief Minister Andrew Barr said the final result was due to Government’s foresight to establish a dedicated project team with sound governance, talented leadership, motivated staff and expert advisers from across the country, and the project partner, Canberra Metro.

He said Canberra Metro went above and beyond in delivering light rail, and, through CMET, continued to provide a high level of service as the light rail operator.

“The final result has verified the ACT Government’s commitment to delivering an affordable and sustainable light rail network for the city. Light rail is already proving incredibly popular, moving thousands of Canberrans every day and we’ve delivered it substantially under budget,” Mr Barr said.

He said the lower than anticipated cost meant the benefit-cost ratio would increase to at least 1.3, rather than the original, conservative estimate of 1.2.

“That means for every dollar invested, Canberrans get $1.30 back in benefits, including better transport, lower congestion, more jobs and the increasing value of homes and businesses along the route,” Mr Barr said.

“Light rail is proving to be hugely popular already, with more people using it every day, and as a result we’ve added more frequent services during peak times to manage this demand,” she said.

“Along the light rail corridor the benefits are plain to see: with light rail getting people to work, opening up new customers to local businesses and seeing hundreds of Canberrans employed on building and construction projects along the alignment that are already using their proximity to light rail to attract buyers.”

Ms Fitzharris said Stage 1 saw around 5000 people work on the project, and the Government hoped to build on that industry knowledge as it continued planning for Stage Two to Woden, which is expected to cost about $1.6 billion.

“Indeed we are already funding early works to prepare the Woden interchange for the next stage of light rail,” she said. 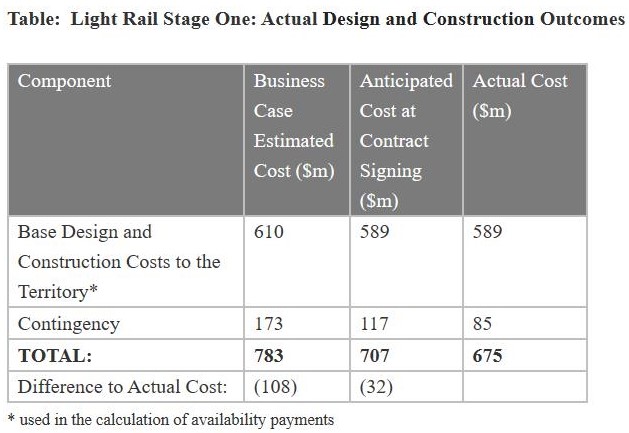 The final bill is still to come, as detailed in the ACT government’s own budget papers. Their own prediction is an eye-watering debt of $2.835 Billion by 2022. Where is the money going to come from?

I’m amused by the bright signs on the front and back of the trams – “Alinga St Service” or “Gungahlin Place Service”. Seriously, where else could they possibly go?

And we honestly believe this?

Final cost? There’s a fair amount of construction still going on. A deliberate early closing of the books?

Not to forget they still need to go back and build the stop at Mitchell. They’ll also need to fix the poor road design on Flemington Road at EPIC and Mitchell sooner rather than later.

How many public housing tenants were sent to the outer suburbs so their property footprint could be sold to private developers just to increase the Light Rail’s return on investment?

How many outer suburban bus commuters had to lose their stops to make it a faster commute for the lucky few near a Rapid route?

Mr Barr must be the most un-Labor leader in the country’s history. Take from the poor and give to the rich.

ACTEWAGL are still to release the amount they contributed by way of capital works for the tram.

I estimate it would be between $50 – $100 million but we will probably never know. They must be spending all those millions they have borrowed somewhere.

Jodie Burns excellent! I'm just sick of people complaining about traveling when it's free. When U have to pay that's when will see the real numbers using the transport network

Hopefully they can use some of the remainder to fix the roads they've made such a mess of.

“That means for every dollar invested, Canberrans get $1.30 back in benefits, including better transport, lower congestion, more jobs and the increasing value of homes and businesses along the route,” Mr Barr said.”

Those of us who live nowhere near the current, or any likely future, tramline will be thrilled to see some of this bonanza of benefits quantified and reaped through a value capture tax on all those lucky homes and business along the route – that should help to keep annual rates rises to a slightly less terrifying level, and pay for some of the stuff that needs doing around the town.

Meanwhile how much money was waisted on NBN???

The table showing Actual costs under “Contingency” is misleading. Actual costs are against the base design and construction costs, leading to total of 675 in the first row.
“Contingency” is magic money used during planning to cost risk and risk treatments. That they had to dip into contingency is not good news; it means that [something unwanted] happened and they had to dip into the magic money (which does happen in the real world). Or, that [something unwanted] did not happen and the cost of the base design and construction over-ran due to poor forecasting of expected costs.
Bottom line is there is a degree of spin in the table and the figures provided. We will probably never know.

Hristo Vizovitis I told u

It’s cheap in the same way that originally making Gungahlin Drive Extension single lane was cheap: So we can ad hoc upgrade it in a few years.

It’s more expensive to do it this way of course and will cause heaps of unnecessary additional congestion when we do upgrade it, but it allows the Govt to postpone the hit on the budget in the short term.

Rob Smith I believe it's up to you to provide the evidence for your own lies.

A white elephant that is full of people?

Trish Roberts sadly lots of Michell businesses complained about it. While others wanted it. Looks like naysayers won. Hopefully Mitchell gets it built in the future.

Trish Roberts not in our lifetime

Gerard Dwyer Yes, Gerard, earlier this year I had to make 4 trips to Mitchell. I then expected there would be a stop. But no.

Rosie Jennings - 2 hours ago
Better if there were more mobile units to catch speeding tailgaters. This I was towing a truck home today it was so close beh... View
David Brown - 2 hours ago
That is irrelevant. They are set low all across the country for exactly the same reason. $$$$$$ View
Lisa Baker - 2 hours ago
Maybe they can raise enough $$ so our rates don’t have to rise another +15% yet another year in a year... View
Opinion 5

Shane Westmore - 9 hours ago
Ch.9 are still stuck in the 90s & so are many of their viewers... it's like they want you to order Kayo View
Anthony Chase - 9 hours ago
Its got little to do with football and everything to do with ratings. View
Marlene Valenzuela - 10 hours ago
Possibly not.... Not unusual!! View
News 9

Helen Prior - 10 hours ago
Kingston was a friendly safe place to live.Now all grog and selfies. View
Food & Wine 7

Mike Bolton - 18 hours ago
I'm guessing that Byron Bay and Nimbin will probably be among the last regional areas to access 5G. View
Business 18

James Manukich - 19 hours ago
Well Done 👌👌👌👌👌 View
Gary Hatcliffe - 21 hours ago
Wacky-doo! View
Nassim Rezakhani - 23 hours ago
Congratulations Jason!! One of the best agents around!! Thank you for the amazing auctions you’ve done for us in the past!... View
News 25

A 16-year-old boy will face court today via video link charged with the murder of the 18-year-old man in what Detective...
News 96

@The_RiotACT @The_RiotACT
Summernats is heading to the Sydney Dragway next year but organisers promise the festival of fuel will be returning to the capital https://t.co/7GvDp4f0Lo (38 minutes ago)

@The_RiotACT @The_RiotACT
The end of a relationship can bring some unexpected financial surprises. Find out what you can do to protect yourself from unwanted debt https://t.co/OumLmu6N34 (2 hours ago)

@The_RiotACT @The_RiotACT
An ethical hackers' hackathon is seeking to locate some of Australia's long-term missing persons. Here's how they'll do it https://t.co/B9CjdGYiw6 (3 hours ago)