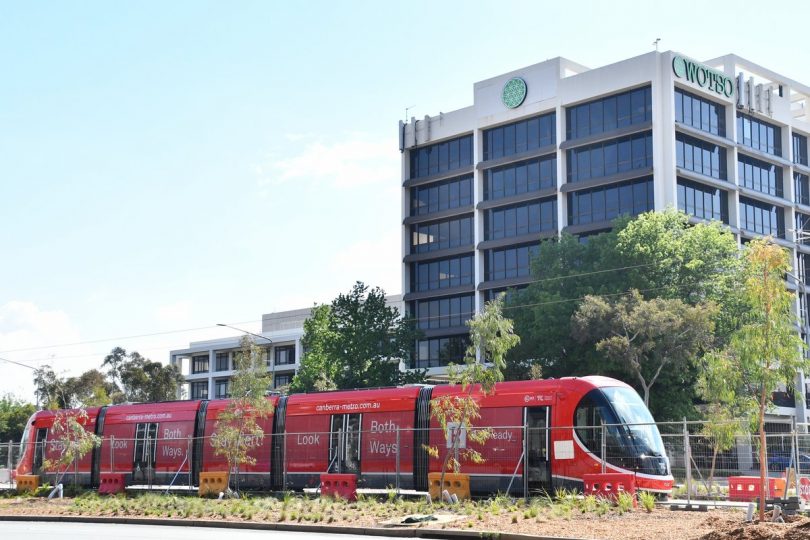 A light rail vehicle out on the tracks for testing. Photo: Canberra Metro.

The ACT community is no closer to knowing when light rail will be operating from Gungahlin to the City, with Transport Canberra unable to provide a completion date and still saying the start date is ‘early in 2019’.

The start of the new bus network has been delayed until the beginning of the second school term in April, presumably so it can coordinate with light rail in the ACT ‘s integrated transport system.

Calling the present stage an exciting time for the project, Transport Canberra says testing of the vehicles is under way, with runs along Northbourne Avenue and the Federal Highway to Dickson.

It says this and the commissioning of the light rail system is now the primary focus as the project progresses to the commencement of passenger services.

All 13 light rail stops will be completed soon, including the installation of ticketing machines and My Way card validators. Tree planting and landscaping will also be substantially completed in February. 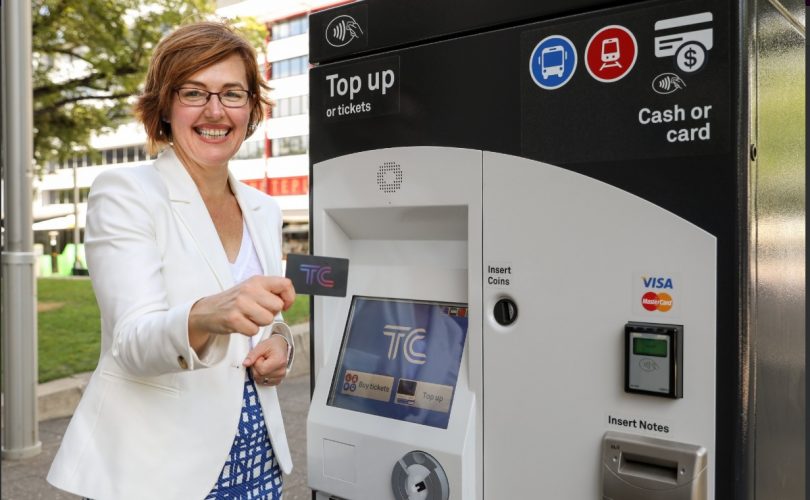 Over the past month, Canberra Metro has been working on the light rail stops, including installing the seating, drinking fountains and security features such as CCTV and landscaping in the areas closest to the city.

Some of the transplanted trees have not survived, particularly with the recent hot spell, and some need to be replaced, but this won’t be done until it is considered appropriate.

The overhead wires between the Light Rail Depot at Mitchell and the Alinga Street Light Rail Terminus in the City have been energised and traffic lights at intersections along the light rail route have been adjusted to cater for light rail’s integration into the road system.

Transport Canberra says that before the system can be safely opened for operations, all elements of the infrastructure and system including the light rail vehicles, the track, signalling and passenger information systems must be rigorously assessed.

Testing will mostly take place between 5 am and 9 pm, with limited testing between 9 pm and 5 am.

The light rail vehicles at first run at low speeds, gradually travelling faster as each element of the light rail infrastructure is verified.

When testing of each light rail vehicle is complete, Canberra Metro drivers will begin their training and familiarisation along Northbourne Avenue and the Federal Highway.

No decision has been made on the route for Stage 2 of the network to Woden, although it seemed increasingly unlikely late last year that a pragmatic Government would stick with its preferred route through Parkes and Barton in the face of Federal opposition. It appeared that a more direct route to Woden may have to be taken.

“A substantial amount of work on Stage 2 has been continuing, including preparing materials to accompany various environmental and planning applications that will be made this year. The ACT Government anticipates making final decisions on the alignment this year,” a Transport Canberra spokesperson said.

It was the only elected Green at the 2012 election (Shane Rattenbury) that determined the go ahead for the light rail in return for his support in allowing the right for Labor to form a government and the Greens local website outlined their (Greens) transport policy as follows:

Transport
Greens have a plan for more buses, better walking and cycling infrastructure, and a light rail network that connects north and south Canberra.

We will keep improving our transport system – and we won’t stop until every Canberran has the best quality public transport.

Note! Nothing about “urban renewal”.

The urban renewal bit was added by Labor as part of the sophistry that enabled a the “value added” component to be added to prop up the phony business plan.

Rattenbury later refereed to the urban renewal concept as an “opportunity” but I can’t recall him ever mentioning “urban renewal” by name.

The fact that he owns negatively geared investments units in the light rail corridor may have been the “opportunity” referred to that he perhaps converted: https://www.canberratimes.com.au/national/act/greens-leader-negatively-gears-investment-properties-one-in-light-rail-corridor-20160912-grealf.html

It’s not hard to find these things if you want to know about them.

If they keep putting off the start time ,no one is going to bother

What odds it will be after Easter?

What is Meeghan Fitzharris actually pleased about? What is that ticket she is holding for?

Nothing more than a billion dollar bribe to keep Rattenbury on side.

I wonder if there is any assurances that it will be operating by Christmas 2019?

We won’t be using it and think it’s a waste of taxpayers money….Gail

I still haven’t heard of anybody who’s planning on using it, is anyone here going to?

So the problem with shallow depth of electrical cables has suddenly been forgotten?

Probably because there wasn’t a problem, just the Electrical Trades Union sniping at the contractor for whatever reason

Looked pretty shallow in the photos in media, just sayin. Let’s hope it’s up to standards and no problems in the years to come

Annie Andcooper Pike the conduits can be shallow for a whole heap of reasons. And when shallow there are other measures they take to protect them. Like put a layer of concrete on top.

As Mark said it was never an safety issue. Just the union making noise over something. Just like the noise they made over the underside of a bridge being too low when the engineers came out and said it was designed to take the flood levels into account.

More scary is the Canberra crimes published these stories as is, when it was clear as day there is another real story hiding below. Guess it would need some investigative journalism rather than wolf whistling.

Not to mention the slow if not non existent progress of the Majura parkway end of Horse Park drive, which seems to have ground to a complete stop

In these metric days, I think milimetring to the start would be most appropriate.

“Transport Canberra says that before the system can be safely opened for operations, all elements of the infrastructure and system including the light rail vehicles, the track, signalling and passenger information systems must be rigorously assessed.”

Of course, none of the above is needed when busses are used because the infrastructure (roads) are already existing, the vehicles are already compliant (registered as MVs) with passenger information integrated, the track and signally is not necessary etc. etc.

Oh, and the drivers don’t need to be trained to pilot a vehicle without a steering wheel.

I give you credit for trying to defend the indefensible, JC.

A billion dollars wasted by conning Canberrans that the light rail was something to do with improving public transport when it was really about “urban renewal”.

All we really needed to do was to add more busses to the existing system commensurate with demand. Not as sexy as trams perhaps but that’s subjective.

The urban renewal aspect was never hidden from those who cared to look.

And if buses are the answer why do we have any rail transport anywhere in the world. Buses can do the lot! Right?

Ps see page 6 and 7 of the contract summary. It doesn’t hide the urban renewal aspect.

JC,
Good to see you’re admitting it’s a land development project rather than a public transport one.

Which is exactly why it should have been funded by the beneficiaries of the land development aspect rather than through general taxation.

Particularly so, seeing as the public transport benefits could have been achieved at a fraction of the cost with a bus system.