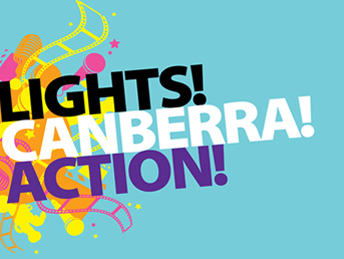 One of the real highlights of the local film making calendar is Lights! Canberra! Action! competition.

On 27 February the list of bonus point items is released and then it’s hell for leather film making until entries close on 9 March.

But the theme for this year is known:

2009 is the 100th anniversary of the staking out of the borders of the ACT and as we approach the Centenary of Canberra in 2013, we remember the selection, planning and building of our city with the theme of ‘Stake Out’

Interpret the theme any way you like – the more creative the better!

The screening of the finalists will be on 13 March at the National Museum and hopefully we’ll be able to bring a number of them to you afterwards from YouTube/Vimeo.

UPDATED: Riot regular, and local theatrical legend, Ozhair, has kindly sent in his 2008 entry by way of example.

It won“Best Use of Festival Theme” and “Best Director”. Enjoy.

Okay, so embedding doesn’t work in the reply section…

Already in pre-production on my effort for this year 🙂

For anyone interested, here’s my entry from last year. It picked up “Best Use of Festival Theme” and “Best Director”

Also, “Back To The Capital”, which had its own thread just recently, was another 2008 entry.

Ken McInnes - 1 hour ago
Great people great coffee always a smile just a happy place. Well done it’s always nice to see a family working together da... View
Neridah McMinn - 3 hours ago
My absolute favourite place for a Saturday morning breaky 💕 View
Graeme Jeffries - 4 hours ago
I always stop there for a great coffee and toasted cheese and tomato sandwich. A friendly place and service with a smile! May... View
Opinion 2

assiduous - 4 hours ago
The predictable consequences of ACT government policy of not supplying the market with land on which to build housing in an e... View
Patrick Rezek - 6 hours ago
Maybe they can sleep on that little Lake extension that’s being built now at Acton. There is $$$ for that. Remember folks.... View
Savita Ubhe - 8 hours ago
Joel Suryawanshi wow domestic violence seem to be a huge issue there. Sad! View
What's On 17