This morning we posted Ralpho’s disgust with the new traffic lights on the Barton Highway at the Kuringa Drive intersection.

This afternoon Territory And Municipal Services have announced they’ve turned the lights off:

“Works have been underway for several months at the intersection of Barton Highway and Kuringa Drive to provide road access into the new suburb of Casey,” Mr Gill said. “The road works will also provide another access point to Gungahlin.

“During this construction work there has been a number of traffic crashes, and in an effort to improve safety of the intersection temporary traffic lights were installed yesterday.

“Unfortunately, after observing the temporary traffic arrangements on site yesterday evening and this morning, Roads ACT has decided that there is currently not sufficient lane capacity available for the traffic lights to be in operation without causing major delays.

“Roads ACT will ensure the traffic lights are switched off and that the previous temporary traffic arrangements be reinstated prior to today’s afternoon peak traffic period. This will mean that traffic on the Barton Highway will have priority with traffic turning into and out of Kuringa Drive controlled by a stop sign.

“Once lane capacity at this intersection is increased Roads ACT will investigate whether or not the temporary traffic lights can be turned back on.

Who said whinging never changes anything? 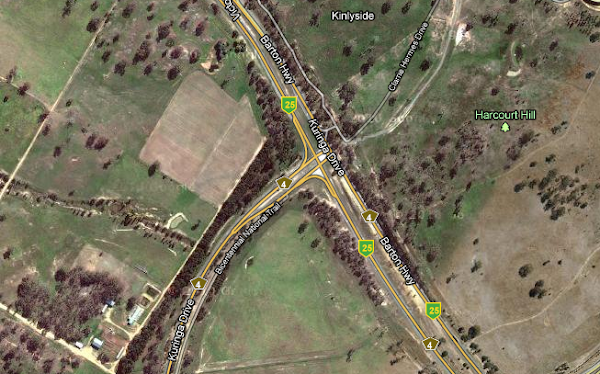 On closer inspection this morning, the lights they were using are clearly the permanent ones. So at least there’s that.

I didn’t see them myself but I imagine they would have been the portable type, so the cost wouldn’t have been all that much.

Probably had something to do with the fact that any road traffic projections Roads ACT do end up underestimating reality by 50%. GDE mark I anyone? The basic rule of thumb should be whatever their consultants (usually SMEC) say traffic will be — double or triple it to get a more accurate idea of actual conditions.

Whenever you hear the words ‘Don’t worry, we’ve got modelling that shows the road will cope with traffic due to development X’ — don’t believe it!! Unless by ‘coping’ they mean traffic will be able to inch along at two to ten metres a minute.

And yet the block-up every morning on Pialligo Ave continues. Same constituency is affected: people who live in NSW and work in the ACT. I wonder how they did it?

Not a surprise. As for accidents if they want to know why there are accidents how about looking at the stupid solid barriers they are using which means it is very hard to see what is coming, and when you can see it is hard to tell what lane they are in. With the latter especially when turning off Kuringa Drive right onto the highway.

Coupled with the fact that the Kuringa drive taffic needs to give way to the highway traffic, despite the road layout (albeit temporary of course) giving the Kuringa traffic the ‘through’ lane. The bizzar thing is on the Canberra side of the intersection it wouldn’t be hard to give the highway and Kuringa drive traffic seperate lanes. Guess if they did then drivers would then drive too fast.

Kate Louise - 3 hours ago
Rob Lillie we could be neighbours! View
Judy Gilchrist - 5 hours ago
Scott Firman This could be your plan for a knock down rebuild. Looks nice🤣🤣🤣... View
Sarah Tozer - 14 hours ago
Megan Moss an alternative View
ACT Election 9

Acton - 3 hours ago
In the Canberra Times today Rattenbury says he sees Covid as an opportunity to implement more Greens policies. He does not wa... View
thebadtouch - 21 hours ago
https://citynews.com.au/2020/trees-act-greens-throw-stones-at-themselves/ View
News 44

John Moulis - 4 hours ago
Any transfers to Noosa? View
Sarah Bauuer - 7 hours ago
Jo Bauer want to go to the Great Barrier Reef with me? View
Jak Kanard - 19 hours ago
If this is true, and not compromised by the buffoonery masquerading as ‘government’ in the ACT, bring it on ! View
ACT Election 106

chewy14 - 5 hours ago
Capital Retro, Firstly, most of the interest rate cuts happened well before the current crisis, so you can't just claim your... View
Brenton Higgins - 6 hours ago
Joshua we’ve had two elections on that already. Canberra decided. View
Jayne Denise - 6 hours ago
Sean Bishop I am a reformed anti-tramer. Northborne is so good now with less cars and less buses. 👌Coincidentally, I work... View
Opinion 7

Acton - 6 hours ago
I know it's hard to change when one has been voting in the same party for 19 years but when the facts change, I change my opi... View
Acton - 6 hours ago
Being too religious and right wing, whatever that means, is a claim frequently made by Labor/Greens of the Liberals, but with... View
russianafroman - 12 hours ago
There is a large proportion of religious people in Canberra especially Christians. Why wouldn't the liberals try to appeal to... View
ACT Election 33

Stephen Esdaile - 17 hours ago
Can't vote Liberal, not voting Labor or Green. Looking at what the progressive are offering.... View
Frank Koch - 19 hours ago
Phillip Business Community well said View
Martin Miller - 22 hours ago
Charny Barney no 'whackadoodle ideas here . He's just plain arrogant to those who disagree with him. There is no real consult... View
Opinion 1

tonyd535 - 20 hours ago
Maybe a hospital first to take pressure off of the existing facilities. One for Gungahlin and another for Tuggeranong to take... View
News 58

John Coleman - 23 hours ago
Gai Hodgson Wilson consider it a reminder that we live in a democracy. They're up for a few weeks. If they stay up, there's f... View
show more show less
*Results are based on activity within last 7 days

@The_RiotACT @The_RiotACT
Canberrans may be more passionate about corflutes than the election itself. Here are some of the top uses for the omnipresent signs which (technically) should all be gone 48 hours after the polls close on 17 October https://t.co/jmR6q4pcN5 (28 minutes ago)

@The_RiotACT @The_RiotACT
Canberra's leading training institutions and employers have been recognised at the ACT Training Awards. @CommsatWork took out the ACT Large Employer of the Year award for the second year running https://t.co/m784tqDCo0 (1 hour ago)

@The_RiotACT @The_RiotACT
A new social enterprise by CIT students is turning coffee grounds and sawdust into compost enhancer, and providing employment for people with a disability https://t.co/e7eaBz01S8 (2 hours ago)