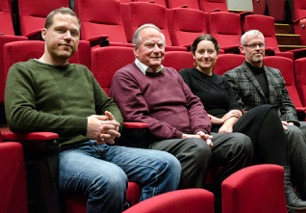 The Canberra International Film Festival returns to Canberra in November with grassroots focus on films hand-picked by local experts. It also has a new home at the National Film and Sound Archive of Australia.

“We aim to inform, stimulate and engage Canberra film-goers through a carefully selected mix of high quality and distinctive films that we are passionate about and want to share with the CIFF audience,” Dr Pike said.

The other festival programmers are NFSA’s head of education and Canberra Times film critic Cris Kennedy, producer Alice Taylor from the Central Australian Aboriginal Media Association, and Olivier Krischer from the ANU’s Centre for China in the World.

“Drawing on our expertise, we are curating a unique festival program showcasing Canberra’s filmmakers alongside Indigenous films, screenings from the Asia-Pacific and Middle East, and restored classics,” Mr Kennedy said.

The full program will be released next month but films already selected for the festival include the new NFSA restoration of the 1957 classic The Shiralee, and the 2015 martial arts film The Assassin, by celebrated Taiwanese director Hou Hsiao-Hsien.

The festival will take full advantage of its new location, with screenings taking place at the NFSA’s Arc cinema, and workshops, discussions and networking opportunities for local film lovers and filmmakers in the theatrette and gallery spaces.

“This year’s film festival will allow for lots of interaction and insights to be shared between filmmakers and festival patrons, with most screenings introduced by someone involved in the creative process,” Ms Taylor said.

Mr Krischer said Canberra had a strong film culture with discerning and educated film-goers who want to be stimulated and challenged by a less commercial, grassroots festival. “We aim to fill that gap,” he said.

NFSA General Manager, Meg Labrum, welcomed the festival to its new home. “Such a wide range of films and events means that the festival will fascinate both long-timers and new festival goers,” she said.

David Pollard - Independent for Yerrabi 2020 - 3 hours ago
Kylie Robinson I’m concerned with mental health support for young people, particularly - but not only - through schools. I... View
Jack Hearps - 9 hours ago
Christopher Stuart Veilands compared to other authorities ... shires etc ... ok.... View
Jack Hearps - 9 hours ago
Bethany Williams your very aware ... the LP is not what it was progressing to be ... it has been taken over by the religious... View
Business 4

Lin Van Oevelen - 14 hours ago
Julie Maynard I know. You're preaching to the converted. :) View
Lin Van Oevelen - 19 hours ago
Kevin Hodder It has long been known that the infection fatality rate is significantly lower than the case fatality rate. Late... View
Darron Marks - 20 hours ago
And how many people can go and get this blood test ? I would personally like to know if I have any antibodies for it ?... View
Food & Wine 5

Kosher Ayatollah - 15 hours ago
Robson Rotation is why we need so many corflutes. Candidates are fighting within their own parties for recognition, not the p... View
News 2

Tara Murray - 18 hours ago
Jason Livingstone not to mention the cull after that which in my opinion wasn’t necessary... View
Jason Livingstone - 19 hours ago
What was the number of wildlife lost due to the fires? 2020 has not been good to wildlife.... View
ACT Election 5

Liv Ruth - 22 hours ago
Hi Jim Jim, if that is Covid debate you are talking about, this should be applied against everyone’s next rates invoice in... View
show more show less
*Results are based on activity within last 7 days

@The_RiotACT @The_RiotACT
A long-running Canberra speakers series on architecture has a new lease of life from COVID-19. The best practitioners from around the country are now on Zoom for inspirational house ideas https://t.co/kTbvy5YAHo (8 hours ago)

@The_RiotACT @The_RiotACT
Keen to get your foot in the property-ownership door? Canberra Raiders star Josh Papali’s home in Ngunnawal, full of sporting memories, will be auctioned on 3 October https://t.co/E0KXmrYRCh (10 hours ago)