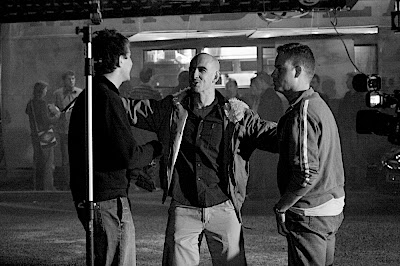 It might have been too strong for the Australian Film Commission but local film makers have finished their work “The Dinner Party” and it’s hitting the big screen this weekend at the Hunter Valley’s Dungog Film Festival.

This from the blurb:

What would you do if you found yourself at a dinner party where the hosts were planning to kill themselves afterwards? What if there was more to it than that? What if you started to have doubts about what the plan was, who knew the plan or even if it was really going to eventuate? Maybe you only know half the story…..

THE DINNER PARTY is an independent Australian feature film made by filmmakers who love cinema that confronts and challenges. Influenced by the filmmakers that brought us REQUIEM FOR A DREAM, FESTEN, BULLY and MEAN CREEK. This film is an emotional roller coaster that only loosens its grip on you when the blood drains and the credits roll…..

And thanks to sambahdi here’s the trailer:

UPDATE: And in big news the film has been accepted into competition at the UK’s prestigious Raindance Film Festival. Congratulations all round!

Serenace1: It’s a shame you missed watching it with an audience. The screening at Melbourne Underground Film Festival was packed and rocked the audience. My friends brother even reported the two girls sitting next to him were both devastated and in tears by the end. Cheers.

I have seen a screener dvd of this film. I certainly wont be bidding to get a print and doubt that many cinemas will book it. Its very weak story telling at best.

I-Filed, this isn’t a retelling of the Anu Singh case, more an “inspired by” kind of deal. And the Anu Singh equivalent character comes off as in no way sympathetic. Unless they’ve radically changed the cut from the one I saw, there’s no apologist agenda at work here.

Thanks for the clarification – that’s a relief!

it is definately Lara Cox !

And the blond lead looks like Anita from Heartbreak High? Is it Lara Cox?

I-Filed, this isn’t a retelling of the Anu Singh case, more an “inspired by” kind of deal. And the Anu Singh equivalent character comes off as in no way sympathetic. Unless they’ve radically changed the cut from the one I saw, there’s no apologist agenda at work here.

Hosts planning to kill “themselves”? Not “Anu Singh and a bunch of law students, now law pracitioners, laughing about plans to murder Joe Cinque”? This would have to be that weasel apologist for Anu Singh, Ricketson, at work. All failure to him.

Dungog is near Phillip Adams’s bolthole – and Adams HATED Anu Singh. Hopefully he will hiss at the screen on Canberra’s behalf!

I got to see a rough cut of this a while back, and I think the boys will do us (Canberra) proud at Dungog. The film has some nice performances and great visuals.

The only thing that didn’t really thrill me is that I found it to be unrelentingly bleak. Not surprising, of course, given the subject matter. And that sort of thing usually does well on the festival circuit 🙂

I’d really like to see that- Joe Cinque’s Consolation is a very powerful read and has stuck with me for years.

and there’ll be a segment on stateline on friday about it.

brendan you should be paying me a pr fee!

wow that has been in post production for ages, glad to see it finally released.

I for one are looking forward to seeing it.

Is this the one touted earlier as being based on Joe Cinque?

Good to see the Mandalay food bus as proof that this is local.