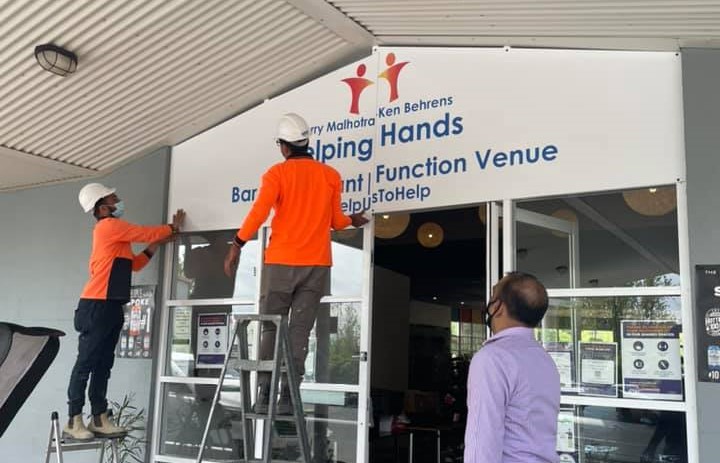 The signs going up at the new function venue. Photo: Garry Malhotra.

Canberra chef Garry Malhotra and his army of volunteers have been working hard in a Narrabundah kitchen for the past three months feeding thousands of families left out on a limb by the COVID-19 lockdown. It’s now expanding to bring a one-stop-shop to vulnerable locals.

“Lockdown is a very stressful time for all and we would like to ease a little of your stress by offering free meals. Please contact us, let us know how many people and your address and we will deliver to your doorstep,” it read.

Garry and the team at ‘Ken Behren’s Helping Hands’ all took a well-earned break upon the easing of restrictions but promised to come back from 23 October, albeit in a slightly different way.

READ ALSO: Get moving to raise funds for families of sick children this November

A “beautiful” new facility at the Capital Public Golf Course in Narrabundah headlines their return, serving as HQ for the fully-fledged not-for-profit charity, which now also includes food hampers and a food delivery van, with plans afoot for mental health and technology classes.

The function venue forms part of the same building as the kitchen that has seen tens of volunteers preparing and packaging thousands of meals since the early days of the ACT lockdown. Not only will it continue to serve as a base for food delivery, but it will also feature laundry and shower facilities for the less fortunate. 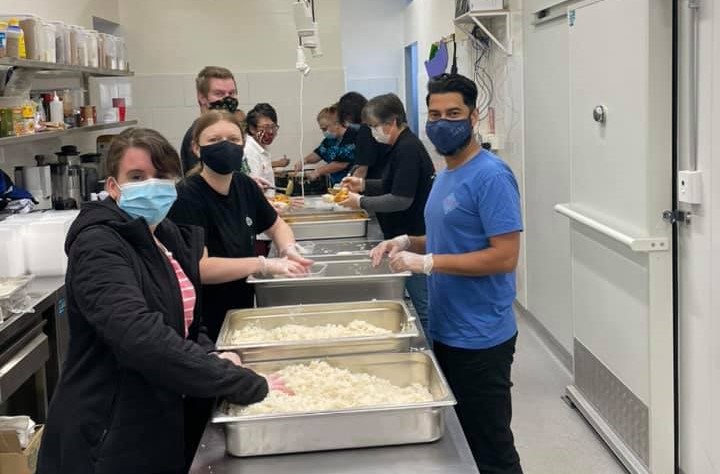 The team of volunteers preparing meals behind the scenes. Photo: Garry Malhotra.

The rest of the venue will be available for hire to companies and departments for functions and events and includes a large seating area, restaurant and bar.

“We will try to reach out to all the government departments and invite them to use this venue for whatever networking events or other functions they want to do,” Garry says.

The entire cost of the hire goes straight back into the operations of ‘Helping Hands’ and the community.

Garry owns the food preparation training facility at Narrabundah and donated it to the charity. A fellow chef will run the day-to-day operations of the charity, while another two chefs will take care of the functions and conferences that come to the venue. Garry promises plenty of variety on the menus from Asian to Continental.

Garry also drives a van to four locations around Canberra every Saturday so people can come and grab their free meals. These are made up of two regions in the south at the Erindale Library car park and Woden park-and-ride car park, and two in the north in the Sea Scouts car park in Belconnen and the Gungahlin Enclosed Oval car park.

“We are also still delivering,” he says. “If people don’t have the capacity to come to us, we go to them.”

From next week, the new venue will also host mental-health wellbeing programs. Every Sunday will see meditational yoga rotating with meditational therapy and other classes. These advertisements will be posted to the Facebook page and “anyone can come and join”. 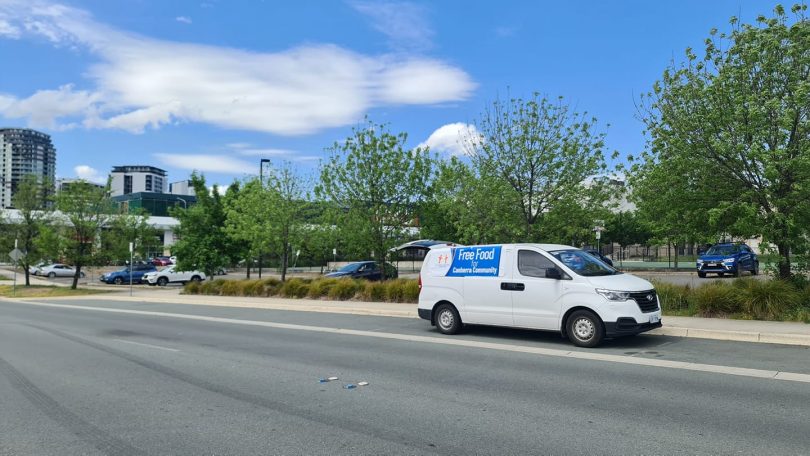 Garry also hopes to host classes to help get senior citizens up to speed with technology, with basic computer, smartphone and social media skills lessons.

“This is something I realised during the 62-day lockdown. The senior citizens were missing out on so much because, in this day and age, everything is on social media or the internet. Some people aren’t on these platforms and lack the knowledge to know how they work.”

A few things will continue as they are.

Every week still sees 800 to 1,000 meals produced and distributed to doorsteps or given out through the food van.

Garry says they also continue to run their operations off the blood, sweat, and tears of volunteers, with around 15 people helping out each day.

“Everyone is very keen to continue as volunteers and support the community, as well as their own mental health.”

The charity is still largely running off funds from a previous GoFundMe page which saw about $64,000 injected into the charity. They have also hosted BBQ fundraisers at the Canberra Clubhouse.

As for the food, Garry and his wife have devoted Friday afternoons to running around to various grocery stores sourcing all the food items. He admits his hours are more manageable now, though.

Garry says the need for volunteers continues. To get in touch and offer your services, reach out through their Facebook page. Helping Hands are also aiming to raise $100,000 via their GoFundMe page.

Troy Dare - 38 minutes ago
Rien Wiersma - Most of the grass we’re talking about here is weed species...which invade the bush capital. And you’re rig... View
Seti Saenz - 55 minutes ago
Trish Hunt It has been raining a lot so it makes sense it is so tall. We are building a house and the builder has to keep can... View
Andrew Sage - 11 hours ago
On my ... View
News 21

Ben Stevens - 1 hour ago
"the increasing reliance on labour hire and consultancies is based on Coalition hostility to public servants and the public s... View
Jay Kay - 2 hours ago
John Haddon Outsourcing cleaners works because the job is relatively simple, both from work performed and a management of ser... View
John Haddon - 2 hours ago
Jay Kay I still think IT can be managed solely outsourced if done correctly, why can we buy an operating system rather than b... View
News 1

JC - 11 hours ago
As was the case with delta the over reaction as you put it is just a pause to buy time to see how big a problem it really is.... View
HiddenDragon - 14 hours ago
With Australia's international border being "thrown open" (as tonight's TV news reports are reminding us) from next Wednesday... View
jorie1 - 15 hours ago
Close the international borders to everyone but Australian citizens! And have strict quarantine for Aussies coming in here .... View
Opinion 59

Brianna - 13 hours ago
That is a very interesting question. My husband and I are both double vaxxed and yet we both got covid back in August.... View
Mike Carroll - 14 hours ago
How many of the new cases are double vaccinated? View
News 17

Capital Retro - 15 hours ago
Looks better than a Tesla any day. View
show more show less
*Results are based on activity within last 7 days

The housing market in Canberra is absolutely back with a vengeance. There were a record number of auctions last week:...
Public Sector 30

The Commonwealth Department of Health will run its consolidated operations at the updated Sirius Building in Woden at about 60...
Public Sector 30

The outsourcing of Australian Public Service (APS) work, including the use of consultants, has been described as an industry full...
Opinion 26

@the_riotact @The_RiotACT
In its day, the Gundaroo Wine Bar was the place to go in the village - and not just because it was the only place open. It was the #heart of the #community, thanks to the legendary hospitality of Matt, Beat and Kay Crowe https://t.co/fI1oW7BsAA (14 hours ago)