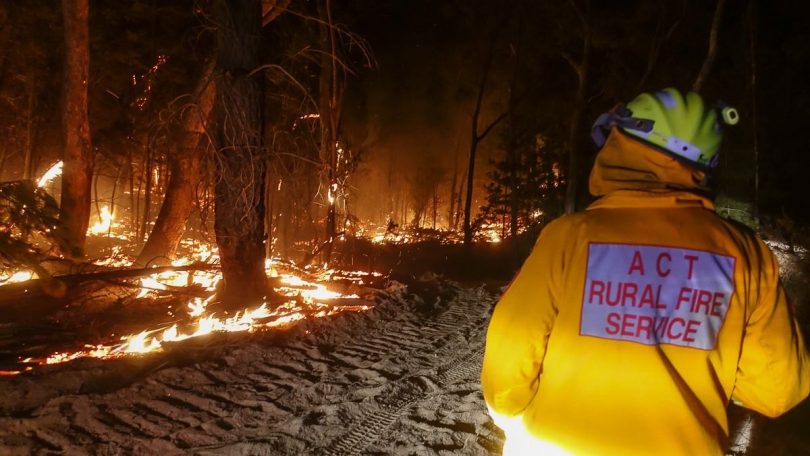 Anyone lighting a fire during total fire ban periods can face penalties of up to $32,000 in fines and/or imprisonment for up to two year. Photo: ACT ESA.

ACT Policing has charged a 20-year-old Mawson man in relation to a number of small grass fires lit in Curtin near Government House earlier this morning.

About 2:00 am today (Saturday 4 January), police say the fires were deliberately lit on the northern edge of Curtin. ACT Fire and Rescue extinguished the fires with no damage to property.

At about 3:40 am following an extensive search of the area, police took the 20-year-old man into custody.

He was then charged with lighting a fire during a total fire ban.

The man is scheduled to appear in the ACT Magistrates Court today.

Police remind the community that anyone lighting a fire during total fire ban periods can face penalties of up to $32,000 in fines and/or imprisonment for up to two years for breaching total fire ban conditions.

If anyone notices suspicious activity in the ACT’s open land or urban fringes, they should contact police on 131444 or 000 in an emergency.

“ACT Policing’s officers are well aware of today’s total fire ban and are mindful of this as they patrol the ACT,” an ACT Policing spokesperson said.

Give him two years jail, in six lots of 4 months chunks.

Set it so each chunk is over the fire danger period and that should help protect the community for the next six years.

Thank God this fire did not snowball, considering the high temperatures today, it would have been devastating. Many thanks to the fire fighters who came to save the situation.
It’s disheartening that someone would do this at a time of crisis in Australia. If this was not prevented today, a lot of backlash would have been on the Prime Minister and there would have been the issue of climate change (which is a fact that the world is going through).

I think, at this time, we should all look inward and look at making progress with this fire issue so it can stop. There is no point creating a divide for political interest, it’s about human lives.
God bless and keep Australia ??!

All known firebugs should be locked up in some form of institution at the beginning of each fire season, and not released until the season is over. Not as a punishment, but to protect lives, property and wildlife

Maybe not locked up, but definitely on a watch list somewhere. Thing is many pyros apply and are rejected from fire services, SES and such, due to their psych evaluations. So…without making a song and dance about it, they could be chucked on a list to be watched around times like these…don’t release their names, just make it be known there is a list and those people are being monitored. Dunno. Probably a bit oxygen deprived this am…

Seriously? The guy obviously has mental health issues … let’s hope that one way or another he’s taken off the streets for the maximum two years